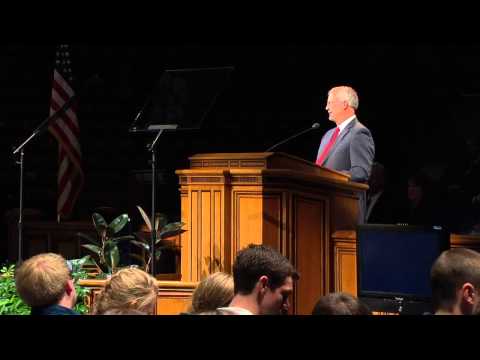 One of my favorite professors, a man whom I greatly admire and respect, David Rolph Seely, delivered a wonderful devotional a year ago on the subject of being created in God’s image and likeness. (Brother Seely is over in Jerusalem until August. I miss him so much!)

You can also read this devotional online here.

If you look carefully to the left of President Samuelson and then Brother Seely for the first couple of minutes before the lights dim, you’ll notice a dorky looking kid with glasses and a blue tie squirming in his seat or otherwise making himself look like a total fool. No, that’s not Hugh Jackman or some other sexy Hollywood stud. That’s just plain old me, looking like a klutz. I had been asked by Brother Seely to give the opening prayer for the devotional, and so I got to sit right behind him during his address.

Actually, a funny thing happened while I was up on the stage. You see, my grandfather, who passed away nearly two years ago, was President Samuelson’s bishop when President Samuelson was a student at the University of Utah. At my grandfather’s viewing I had a chance to meet President Samuelson very briefly. (There’s another funny story about that incident that I’ll save for later.) Fast forward some eight months later and here I am walking up onto the stage to take my seat before the devotional began. Another professor of mine, William Hamblin, whom you can briefly see sitting behind Brother Seely, had been asked to give the closing prayer. So we went up and took out seats together. When President Samuelson came to greet us before the devotional, he shook my hand and with a smile said, “Oh, it’s good to see you again Stephen. How is your family doing?” “Just fine, Brother Samuelson. Thank you,” I replied. We chatted for just a moment or two before President Samuelson then shook Bill Hamblin’s hand and the sat down. When the two of us sat down, Bill Hamblin turned to me and with a flummoxed voice asked, “How on earth does President Samuelson know you on a first name basis? Not even I’m on a first name basis with him! And here I thought this whole time that you were just some dopey student!” I explained to Bill the situation, and we chuckled over the incident.

But that’s just a fun little aside. Really, you should watch or read the devotional. It’s very nice.