Anyone who is lucky (or unfortunate?) enough to have stumbled upon this blog may be wondering, “Where the heck does the name of your blog come from?

The name Ploni Almoni comes from the book of Ruth in the Hebrew Bible.

No sooner had Boaz gone up to the gate and sat down there than the next-of-kin, of whom Boaz had spoken, came passing by. So Boaz said, ‘Come over, friend; sit down here.’ And he went over and sat down. (NRSV Ruth 4:1)

So, what will be discussed on Mr. So-and-So’s Latter-day Saint blog? Well, mostly Latter-day Saint stuff, as you might guess, as well as things related to my other areas of academic interest, namely, ancient Near Eastern Studies and German Studies. 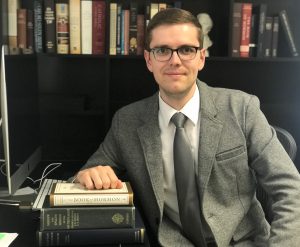 My name is Stephen Owen Smoot. I hail from Salt Lake City, Utah. I served a Latter-day Saint mission from 2009-2011 in the New Hampshire Manchester Mission. In 2015 I graduated cum laude from Brigham Young University with Bachelor of Arts degrees in Ancient Near Eastern Studies and German Studies. In 2018 I completed a Masters degree in Near and Middle Eastern Civilizations at the University of Toronto with a concentration in Egyptology. I am currently a PhD student in Semitic & Egyptian Languages and Literature at the Catholic University of America. While at BYU I was a vice president of the Students of the Ancient Near East Council, a research assistant for many great professors, and a student intern at the Joseph Smith Papers Project. At the University of Toronto I was a member of the Near and Middle Eastern Civilizations Graduate Students’ Association.