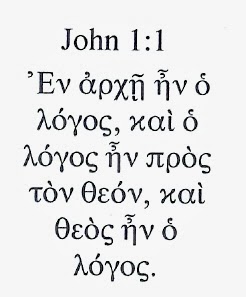 The scene in which Faust first meets Mephistopheles takes place in Faust’s own Studierzimmer. After a long conversation with his buddy Wagner, Faust retires with the black poodle he encountered on the street (and which is actually Mephistopheles in disguise). Something I found positively fascinating about this scene is Faust’s attempt to translate John 1:1 from “das heilige Original” (i.e. Greek) into “mein geliebtes Deutsch.”

What follows is Faust’s wrestling with translating John 1:1. Instead of providing my own translation of the German, I thought it’d be fun to reproduce the translation of Bayard Taylor, who managed to do a better job than I probably ever could in capturing the delicious rhyme in Goethe’s verse.

But ah! I feel, though will thereto be stronger,
Contentment flows from out my breast no longer.
Why must the stream so soon run dry and fail us,
And burning thirst again assail us?
Therein I’ve borne so much probation!
And yet, this want may be supplied us;
We call the Supernatural to guide us;
We pine and thirst for Revelation,
Which nowhere worthier is, more nobly sent,
Than here, in our New Testament.
I feel impelled, its meaning to determine,—
With honest purpose, once for all,
The hallowed Original
To change to my beloved German.

First, I love the fact that Faust, to find revelation and comfort, not only goes to the scriptures, but also goes to the original Greek. It reminds me of Joseph Smith’s numerous comments on receiving inspiration from reading the original languages of the Bible. On 19 January, 1836, for example, Joseph remarked, “The Lord blessed us in our studies,– this day we commenced reading in our hebrew bibles with much success, it seems as if the Lord opens our minds, in a marvelous manner to understand this word in the original language, and my prayer is that God will speedily indue us with a knowledge of all languages and toungs.” (Joseph Smith Papers, Journals, Volume 1, p. 164.) One month later Joseph would exult, “My soul delights in reading the word of the Lord in the original.” (Joseph Smith Papers, Journals, Volume 1, p. 186.) The learned Faust, like Joseph, understood that “wir sehnen uns nach Offenbarung,” and that this revelation can come more powerfully when we get closer to the original tongues of the ancient prophets.

And so Faust cracks open his New Testament to the gospel of John and commences to work on a translation. However, he gets caught up in just the opening verse.

A number of things stand out about this passage. First of all, I can sympathize with Faust’s inability to render the Greek word λόγος (logos). A casual look at any Greek dictionary will reveal a number of possible meanings: word, thought, speech, story, logic, rationality, saying, etc. The Stoics even attached further meaning to logos by making out to be something like “cosmic harmony” or “order.” I myself prefer to render logos in John 1:1 as “intelligence,” given the significance of such in LDS theology. (As an aside, I was pleased to read just this morning that at least one other scholar argues “intelligence” is an acceptable translation of logos. See Joseph H. Lynch, Early Christianity: A Brief History [New York, N. Y.: Oxford University Press, 2010], 35.)

But the imprecise meaning of logos aside, I find it significant that Faust not only tries a number of different ways to render the word, but also hopes that he’s “vom Geiste recht erleuchtet.” He evidently is, as he later exclaims, “Mir hilft der Geist!” That he claims inspiration from the spirit in his translation immediately reminds me of Joseph Smith’s inspired translation/revision of the Bible, including John 1:1. As many LDS scholars have noted, it’s apparent that Joseph was not attempting a mechanical, word-for-word, “literal” language-to-language translation of ancient biblical manuscripts, but was, while being led by inspiration, moved to make corrections, changes, and revisions to flesh out the meaning and significance of the text, provide entirely new meaning for latter-day theological needs, harmonize seemingly contradictory passages, and offer something of a Mormon midrash on the biblical accounts. While I think it’s arguable that Joseph did, in a handful of instances, restore some ancient content with his inspired translation, I don’t think this is predominantly what he was doing. I think he was, like Faust, trying to better communicate the meaning or significance of the passages he was wrestling with, among other things.

But that’s not all. In D&C 93 Joseph reveals yet another rendering of John 1:1, this time from the perspective of John himself! With wording that probably wouldn’t have elicited too many objections from a good Stoic, Joseph reveals:

In this instance Joseph, through revelation, taps into the mind of John (presumably the author of the gospel that bears the same name) to further elucidate the meaning of this highly contested and maddeningly inscrutable verse. In this sense he “translates” the text by conveying revealed understanding and clarification of the text.

Is this what John meant in John 1:1? Well, it’s impossible to tell, since John is not around to help us make sense of his text. Indeed, some literary critics would even argue that trying to find out “what the author meant” (sometimes called the Intentional Fallacy) is unproductive and not a worthwhile pursuit. Nevertheless, for Latter-day Saints who accept prophetic inspiration and revelation, it may not be so crazy to suggest Joseph was inspired to give us a glimpse into what John was trying to communicate in John 1:1. Or it could be that Joseph was inspired to “translate” John 1:1 by giving it application and meaning for modern Saints? Whatever the case is, it’s clear that Joseph and Faust are trying to get at the same thing: inspired translation by the spirit. This only makes sense, since Faust complains on a number of occasions that he is incapable of reaching divine understanding through his books and studies. (That is, after all, why he was driven to magic and the occult.) Likewise, in a comment that proves he would’ve gotten along well with Faust, Joseph once remarked, “The best way to obtain truth and wisdom is not to ask it from books, but to go to God in prayer, and obtain divine teaching.” (History of the Church 4:425)

Without dragging this post out any longer than it has to be, I’ll simply conclude by saying that, once again, I’m highly impressed with Goethe’s (unknowing) anticipation of the Prophet from Palmyra.

1 thought on “The Faustian Translation of John 1:1”