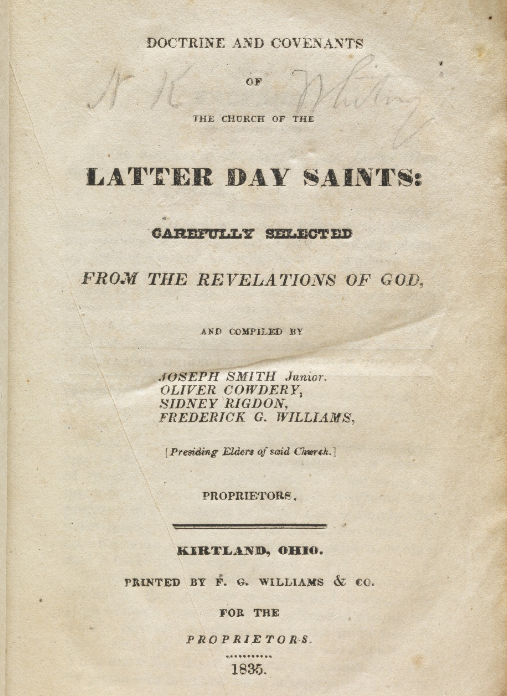 This evening I bought a new set of scriptures. I have normally just been using the Gospel Library app on my phone, but I felt prompted during General Conference to start using a printed set of scriptures. I was shocked to notice some of the information being casually tossed out to the public in the new edition of the scriptures. For example, did you know that the introductory material for the 2013 edition of the Doctrine and Covenants contains the following?

The revelations were originally recorded by Joseph Smith’s scribes, and Church members enthusiastically shared handwritten copies with each other. To create a more permanent record, scribes soon copied these revelations into manuscript record books, which Church leaders used in preparing the revelations to be printed. Joseph and the early Saints viewed the revelations as they did the Church: living, dynamic, and subject to refinement with additional revelation. They also recognized that unintentional errors had likely occurred through the process of copying the revelations and preparing them for publication. Thus, a Church conference asked Joseph Smith in 1831 to “correct those errors or mistakes which he may discover by the Holy Spirit.”. . . Each new edition of the Doctrine and Covenants has corrected past errors and added new information, particularly in the historical portions of the section headings. The present edition further refines dates and place-names and makes other corrections.

Wait, did I read that correctly? You mean to say that the Church printed in its very own scriptures the fact that the D&C contained errors that needed to be corrected and that other changes and refinements were made to the early revelations as well?

Okay, perhaps this is just some oversight by the Church’s scripture committee. I’m sure the Church is doing a perfectly admirable job hiding the damning fact that the the D&C has been changed and corrected from edition to edition, and even that some of the early manuscripts of the revelations in the D&C were altered and refined through their transmission.

Many other people made copies of the revelations; but because care was not always taken in copying, many errors were made, repeated, and multiplied as the copies were copied. Realizing the importance of having correct copies, the leaders of the Church determined to publish them. Because the originals contained spelling and grammar errors, a Church conference moved that Joseph Smith should make the necessary corrections. (Far West Record, p. 16.) This was the beginning of controversies and charges made by persons who do not know or understand that the text of recorded revelation can be edited and “changed.” . . . There were some at the time the book was published who objected to the editing of the revelations, apparently misunderstanding the process of revelation and the principle of “precept upon precept” that the Lord applied as he continued to give new understanding to the Saints. The Church’s viewpoint, however, is adequately explained by Elder B. H. Roberts: “Some of the early revelations first published in the ‘Book of Commandments,’ in 1833, were revised by the Prophet himself in the way of correcting errors made by the scribes and publishers; and some additional clauses were inserted to throw increased light upon the subjects treated in the revelations, and paragraphs added, to make the principles or instructions apply to officers not in the Church at the time some of the earlier revelations were given.” (Link)

Joseph and his associates were appointed by the actions of Church conferences to prepare the revelations for publication by correcting the texts. Recent analysis of both manuscript revelation books reveals how and when many of the changes were made. For example, some changes were made before selected items were published in Missouri, while others were made in Ohio before the 1835 publication of the Doctrine and Covenants. . . . In a few cases, more substantive changes were made as revelations were updated for the 1835 Doctrine and Covenants. For example, section 20 was originally received in 1830, before much of the leadership structure of the Church as we know it today was revealed to Joseph Smith. By 1835 Joseph had organized many offices and quorums by revelation. To include this newly revealed ecclesiastical order, several text changes and additions were incorporated into section 20. Our current verses 65–67 on ordaining men to priesthood offices, for instance, had been revealed after the 1833 publication and were subsequently added to the 1835 publication. . . . The editing and updating of revelation texts in the early years of the Church demonstrate the process of continuing revelation to Joseph Smith. The revelation manuscripts reveal how men grappled in trying to make certain that the ideas and doctrines Joseph received were transcribed and printed accurately—a process that for the publication of any work risks the introduction of error. In some instances, when a new revelation changed or updated what had previously been received, the Prophet edited the earlier written revelation to reflect the new understanding. Thus, as his doctrinal knowledge clarified and expanded, so did the recorded revelations. They were characterized by the changing nature of his understanding of the sacred subject matter. The Prophet did not believe that revelations, once recorded, could not be changed by further revelation. (Link)

Many revelations recorded in the Doctrine and Covenants do not now appear as when they were first recorded. However, a correct understanding of the nature of the revelations the Prophet Joseph Smith received and how he updated them in light of continued revelation explains why many changes occurred. Indeed, each of the sections has been edited to some degree, demonstrating that Joseph Smith did not receive all these revelations as word-for-word dictations from the Lord (although he may have received some this way). Rather, he received inspiration and wrote the revelations using his own words, often couched in Victorian English. . . . Many who discover a difference in an earlier text of the scripture assume that either the earlier text is the most correct since it is closer to the time of reception, or that the change was made by designing men who were trying to change the scriptures of the Lord to suit their own purpose. Neither of these opinions is valid in the light of recent research. The majority of changes that have some significance were made in the days of Joseph Smith, and were made under his direction. The most important thing that must be kept in mind is that we accept the revelations as they are now written. Knowing about earlier texts and changes which have occurred may aid the researcher in his studies of Church history, but the earlier versions have no claim upon our faith—it is the current edition upon which we rely. The fundamental concepts upon which our faith rests are not affected by the variant readings. (Link)

Over the course of the first five years of the Church, Joseph and others under his direction made changes and corrections to some of the early revelation texts in an attempt to more closely portray the intent of the revelation. Other times, especially as the revelations were being prepared for publication, Joseph was inspired to update the contents of the revelations to reflect a growing Church structure and new circumstances. At times this process resulted in substantial additions to the original text. . . . While many members today may look at the revelations as being static and unchanging, the Prophet Joseph Smith saw the revelations as living and subject to change as the Lord revealed more of His will. Members of the Church relied upon Joseph to receive continued revelations for the Church. As former Church Historian Elder Marlin K. Jensen of the Seventy has explained: “Joseph seemed to regard the manuscript revelations as his best efforts to capture the voice of the Lord condescending to communicate in what Joseph called the ‘crooked, broken, scattered, and imperfect language’ of men” (see also D&C 1:24). (Link)

Oh dear. I seriously hope someone was fired for letting these embarrassing truths get leaked in the Ensign. I mean, come on people! How can we expect the Church to maintain its grand conspiracy of covering up this stuff when we do things like straightforwardly and matter-of-factly talk about it in the Church’s own publications?