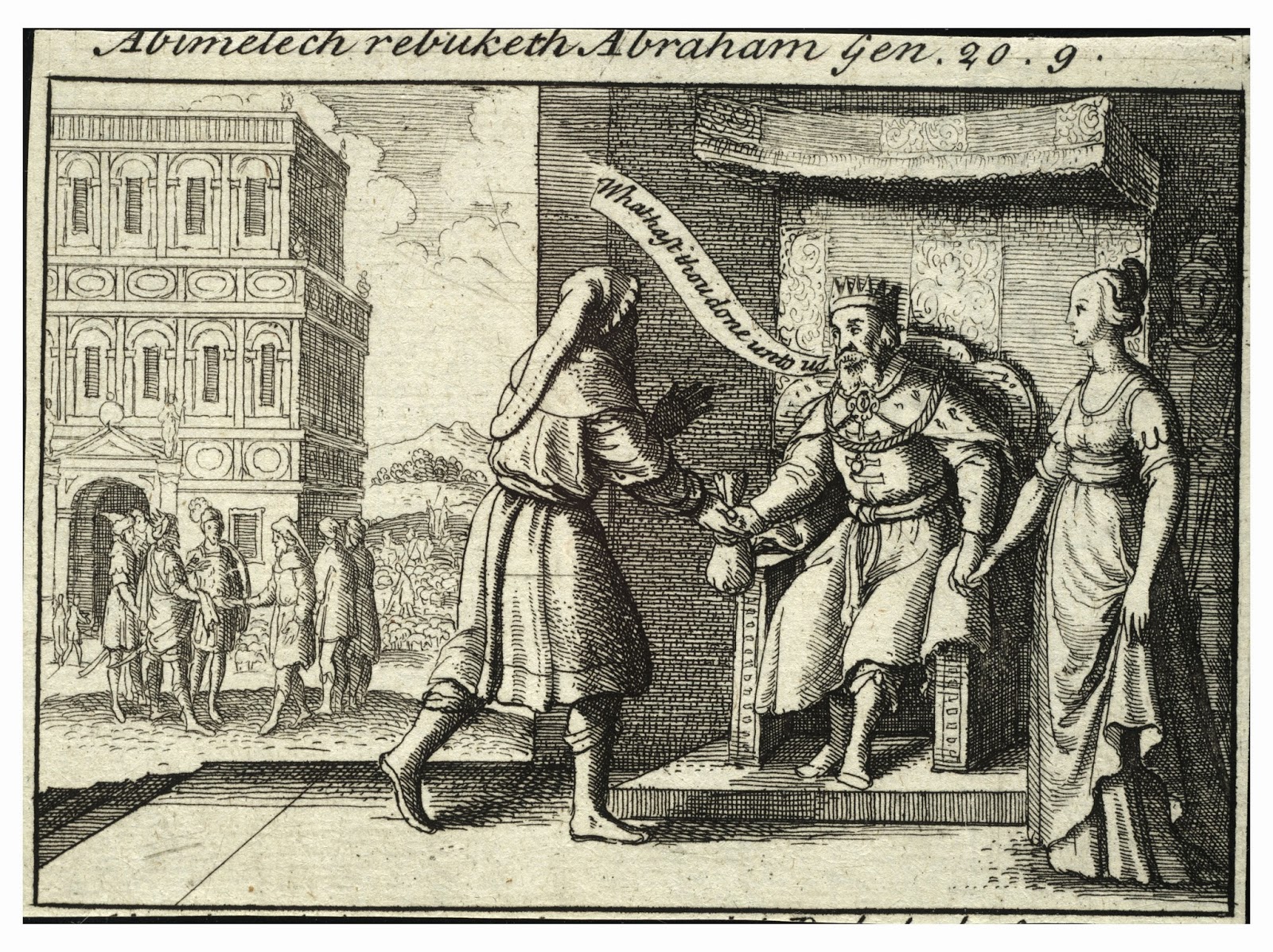 Dan Peterson, over at his blog, has a post on the falsehood that Mormons are encouraged to engage in what critics derisively call “lying for the Lord.”

Dan’s post reminded me of an article published by Yael Shemesh of Bar-Ilan University titled “Lies by Prophets and Other Lies in the Hebrew Bible.” The article appeared in the Journal of the Ancient Near Eastern Society back in 2002.

Here’s what Shemesh had to say about the Hebrew prophets “lying” in the Old Testament.

In light of the Bible’s complex attitude to falsehood—outright condemnation, on the one hand, versus recognition of its legitimacy and its occasional necessity, on the other—my aim in this article is to examine how the Bible pictures falsehoods uttered by those figures whom one would least expect to lie, namely, the prophets. I will attempt to show that in all instances of prophets telling lies the biblical narrator is at pains to put a better face on the action. Formally speaking, the prophet cannot be accused of lying, although he has consciously and deliberately misled his interlocutor. The technique of deception involves half-truths and concealment of relevant information, or ambiguity. It will also be shown that this technique, though most characteristic of prophets, is also used on occasion by other positive human figures, and even more so by God.

Shemesh argues that the Hebrew Bible allows lying (or at least deception) for certain purposes. “Contrary to Augustine and Kant, the Hebrew Bible recognizes that under certain circumstances lying is unavoidable, particularly when it serves the weak as their only weapon against some force seeking to harm them or other persons. Included in this category are various instances of lies intended to save the liar’s life or altruistic lies (mainly on the part of women).” The extreme example I’ve seen given for the morality of lying in some situations is the “Jew in the basement” scenario. In this hypothetical situation (which, unfortunately, actually had plenty of real-world occurrences in the past), one is confronted by the Nazi secret police, who demand to know if you’re harboring any Jews. You do have a Jewish family (your next door neighbors, perhaps) hiding in your basement. So, what do you do? Do you lie and insist you have no Jews in the basement in order to protect them, or do you tell the truth and send them to their deaths? This is an extreme example, but it serves to illustrate Shemesh’s point about the kind of deception the Hebrew Bible seems to allow.

The examples of Israelite prophets and others being less than forthright (or in some cases being deliberately misleading) provided by Shemesh include the following.

1. “Jacob’s deception of his father in order to receive his blessing (Genesis 27).”

2. “Judah’s daughter-in-law Tamar, who disguises herself as a prostitute in order to become pregnant by him after his failure to marry her to his son Shelah, is described in a favorable light, and indeed justified by Judah himself in the narrative (Gen. 38:26). Tamar is rewarded for her subterfuge by the birth of the twins Perez and Zerah, through whom the tribe of Judah is established (Gen. 38:27–30).”

3. “The biblical narrator also takes a favorable view of fraud when the object is some religious goal in keeping with the general outlook of the Bible. An example is Jehu’s lying to the worshippers of Baal, which is aimed at killing all the prophets of Baal and eradicating his worship from the country (2 Kgs. 10:18–28).”

4. “In one case we even find God twisting the truth in order to preserve amicable relations between Abraham and Sarah and to prevent Abraham’s feelings from being hurt. Upon overhearing the prediction that she was about to become pregnant, Sarah laughs, ‘Now that I am withered, am I to have enjoyment—with my husband so old?’ (Gen. 18:12); God, however, quotes her in Abraham’s hearing as having said, ‘Shall I in truth bear a child, old as I am?’ (Gen. 18:13), making no reference to Abraham’s inadequacy. This episode was used by the Sages of the Talmud as a proof-text showing that it is permitted to deviate from the strict line of truth in order to establish peace (BT Yeb. 65b; BT B.M. 87a).”

Shemesh then gives the stories in Genesis 20:2 (cf. Abraham 2:21–15), Exodus 3:18, 1 Samuel 16:2, 2 Kings 6:19; 8:10, and Jeremiah 38:26 as examples of prophets being less than honest. “Common to all these cases is that the prophet has not uttered an outright lie, but employed a technique of telling a half-truth (Abraham, Moses, Samuel, and Jeremiah) or using ambiguity (Elisha). Formally speaking, therefore, one might say that he has not told a lie, although his intention was undoubtedly to mislead another person.” Said another way, “[The] prophets’ lies in the Bible are not considered, formally speaking, as outright lies, because the prophet did not actually say something untrue. In essence, however, it is quite clear that the prophet intended to mislead his interlocutor, and in that sense he was undoubtedly speaking deceptively.”

What is Shemesh’s conclusion after all of this?

In contrast to those theologians and philosophers who reject any kind of lying, under any circumstances, the Bible recognizes that certain situations justify and even require deceptive measures. This is true even regarding God and God’s prophets. Nevertheless, as we have seen, the Bible avoids ascribing outright, undisguised falsehood to the deity or to the prophets (and on occasion is equally reticent in regard to other positive figures). . . . The common point in all instances is that the prophet, formally speaking, has not actually lied, i.e., uttered an outright falsehood, although he has misled someone in a sophisticated manner, consciously and deliberately.

I have often heard critics, including sectarian critics, condemn Joseph Smith for his carefully (and, admittedly, awkwardly) worded public denials of practicing polygamy. On this criticism, I’d direct the reader’s attention to this article by Gregory Smith. (See especially the section titled “Polygamy and Lying”.) Michael Ash has explained that “[t]he dissembling by some early Latter-day Saints is understandable when we view the situation in context. The Saints found themselves in a war in which they were the underdogs . . . and therefore they did not feel obligated to jeopardize their existence by dealing forthrightly with their persecutors.” As such, “some Saints felt it necessary to lie . . . to save their spiritual lives and to protect their fellow members from physical attacks.”[1] Gary James Bergera, writing in 2011, made a similar point. “Smith’s decision to dress his teaching [of plural marriage] in secrecy demonstrates an appreciation of its affront to conventional morality and its civil illegality,” according to Bergera. “Smith not only feared a backlash from followers but, more importantly, criminal prosecution and imprisonment. He understood that, except in the eyes of his most faithful followers, his celestial marriage doctrine was immoral and illegal.”

Given the criminal element of Smith’s practice, it should come as no surprise that when confronted publicly with charges that he endorsed the taking of plural wives, Smith repeatedly denied it. His denials most often took the form of deliberate obfuscation, if not outright lying. While he no doubt shared the nineteenth-century definition of lying as “a falsehood uttered for the purpose of deception,” he felt fully justified in lying if he believed the circumstances required it.[2]

While I disagree with Bergera’s characterization somewhat, I agree with the general thrust of his point. In addition, it must be remembered that some of Joseph Smith’s denials of practicing polygamy were actually denials of the specific charge of adultery. These denials of adultery, as M. Scott Bradshaw has recently argued, weren’t deceitful, since, technically speaking, Joseph’s behavior wasn’t breaking any Illinois anti-adultery laws.[3]

So my question is this: was Joseph Smith any less moral in “lying” than the Hebrew prophets were? Doesn’t what Joseph Smith did basically amount to the same thing that the Hebrew prophets discussed by Shemesh did? I would argue that Joseph Smith’s “lying” about polygamy falls in the same category as the examples provided by Shemesh. In fact, this is precisely what Brian C. Hales has recently argued. “Scriptural examples demonstrate that occasionally deception was permitted or required in order to serve God’s purposes,” notes Hales.[4] As an example Hales points to the wife-sister pericope in Genesis 12 (cf. Genesis 20) and other scriptural passages.

It is also plain that God’s commandments might contradict the laws and requirements of authoritarians and governmental leaders. When Apostles Peter and John were commanded by Jewish leaders to stop preaching about Christ, they answered: “Whether it be right in the sight of God to hearken unto you more than unto God, judge ye. . . We ought to obey God rather than men” (Acts 4:19, 5:29). Shadrach, Meshach, and Abednego refused on pain of death to worship Nebuchadnezzar’s idol (Dan. 3:15–18). General Moroni boldly declared: “I do not fear your [governmental] power nor your authority, but it is my God whom I fear” (Alma 60:28).[5]

Some have concluded that essentially nothing Joseph Smith taught needs to be taken seriously because he was obviously not obeying his own counsel. Such views seem insufficient to explain the forces then converging upon the Prophet regarding plural marriage. Assuming Joseph was an arch hypocrite by whom the Latter-day Saints were duped transforms them into caricatures who are of little use to researchers seeking to produce accurate historical reconstructions. LDS polygamists who used subterfuge to hide compliance with divine mandates undoubtedly felt inner conflict that was not completely assuaged by the belief that their deceptions were designed to allow them to obey God’s laws, which they accepted as a higher law—not only on the basis of their faith in Joseph Smith as a prophet but also on their personal spiritual experiences.[6]

But why the necessity for secrecy? Like Ash and Bergera, Hales indicates that “[o]pen admission [of plural marriage] would have brought an onslaught of prosecutions.”[7] Taken all together, then, I think Hales’ position is reasonable.

Faced with contradictory commandments, participating pluralists and other Church leaders generally sought a middle ground of constructing a perception that polygamy was not taught or practiced but made attempts to avoid outright prevarication in doing so. The Prophet’s public instructions were consistently designed to refute extreme allegations against him and to expose licentious conduct in Nauvoo. However, when specifically addressing plural marriage, he carefully chose the words used in his disclaimers. Apostle George A. Smith defended the practice in an 1869 letter: “Anyone who will read carefully the denials, as they are termed, of plurality of wives in connection with the circumstances will see clearly that they denounce adultery, fornication, brutal lust and the teaching of plurality of wives by those who were not commanded to do so.”[8]

I appreciate that the morality of lying is complex and debatable. Moral philosophers from Kant to Sam Harris have debated this issue intensely. I thus do not intend to lay down a final answer to this nuanced question in one brief blog post. What I do want to do, however, is highlight the hypocrisy of certain sectarian critics who blast Joseph Smith and other Mormons for “lying for the Lord” but ignore the biblical examples of the exact same thing being done by the Hebrew prophets for the exact same reasons.

[2]: Gary James Bergera, “Vox Joseph Vox Dei: Regarding Some of the Moral and Ethical Aspects of Joseph Smith’s Practice of Plural Marriage,” The John Whitmer Historical Association Journal 31, no. 1 (Spring/Summer 2011): 38–39.

2 thoughts on ““Lying for the Lord” in the Hebrew Bible”