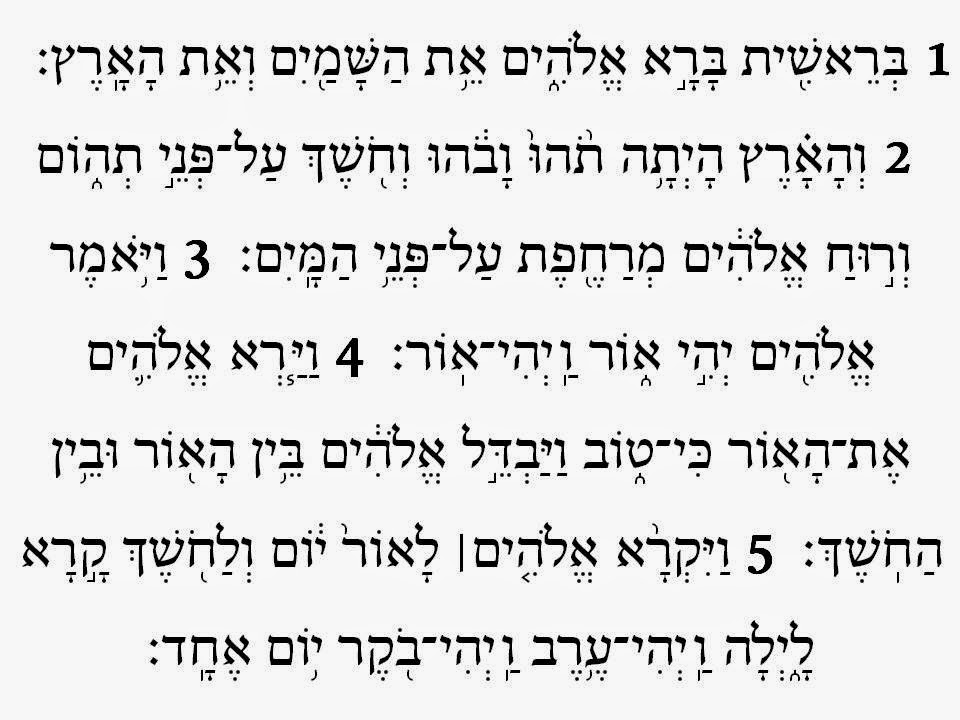 David Carr has some interesting things to say about the account of the creation in Genesis 1. His comments have significant overlap with Mormon cosmology, especially as it is found in the Book of Abraham.

The first verse of Gen 1 is usually translated “in the beginning when God created heaven and earth,” and most people picture God conjuring parts of the universe like a magician: “Let there be … and it was so.” But historical research suggests that the traditional translation is wrong. Instead, the first two verses of the Bible describe the chaos that preceded God’s creative ordering of the cosmos: “when God first created the heaven and the earth—and the earth was a formless void, darkness was on the face of the deep, and a divine wind hovered over the waters—God said ….” In the beginning, so to speak, was chaos.


The rest of Gen 1 then describes how God transforms that dark chaos into an ordered, inhabited, “very good” cosmos. God creates light first, and this helps ground the pattern of day and night that dominates the rest of the chapter. On day two, God creates a dome (often translated “firmament”) that creates an air bubble between the upper and lower primal oceans, in which the rest of creation can flourish. Day three brings the creation of dry land and God’s command for that dry land to spring forth with plants. The next three days each correspond to one of the first three: God creates heavenly lights on day four, corresponding to light on day one; God creates sea and air creatures on day five to inhabit the realms focused on in day two; and God creates animals and humans on day six to inhabit the dry land created on day three and to eat the plants that sprung forth then. Throughout, God speaks commands like a royal ruler, and God’s commands are executed, marked by notices such as “and it was so.” Then, God looks on God’s work and pronounces that “it is good.” Indeed, after creating animals and humanity on the sixth day, God proclaims the inhabited cosmos to be “very good.” If there is one message that Gen 1 wants to give about God and the universe, it is that God is in charge and the world that God ordered is “very good.” Note here that the emphasis throughout the chapter is on God’s power to organize creation into the different parts of a cosmic temple, not God’s magical “creation” of matter out of nothing. The main idea is the goodness of creation and humanity’s role in it.

On a sidebar the article straightforwardly concludes, “Genesis 1 describes God’s ordering of primeval chaos, not creation ‘out of nothing.'”

So far so good. As you may well know by now, I’ve made this exact same argument before.

But then here is Carr’s next section.

Some people have suggested that Gen 1 can be made compatible with modern science if one understands the word “day” in the story to refer to an “era” potentially spanning thousands or even hundreds of thousands of years. What these readers miss is that the whole six-day structure of Gen 1 leads to a conclusion based on an actual week: God’s rest (Hebrew shabbat) on and blessing of the seventh day (Gen 2:1-3). No other ancient creation account is organized this way. Some describe the gods resting after creation, but only because they had created humans to do their work for them. Gen 1 is unique in describing creation as a seven-day process crowned by God’s establishment of a weekly holiday on which not just God but eventually humans as well are to rest (for example, Exod 20:8-11, Exod 31:12-17). This Sabbath rest is not a burden but another way that humans can reflect God’s “image and likeness.” Thus to reinterpret the “days” of Gen 1:1-2:3 as metaphorical “eras” or the like is to miss the whole emphasis of this story on God’s introduction of a Sabbath rest in the week we all know.

I wonder how to reconcile this idea with the Book of Abraham’s use of “time” in its creation account (cf. Abraham 4:8, 13, 19, 23, 31; 5:2–3), or with Elder Bruce R. McConkie’s views expressed in 1982: “But first, what is a day? It is a specified time period; it is an age, an eon, a division of eternity; it is the time between two identifiable events. And each day, of whatever length, has the duration needed for its purposes.” (“Christ and the Creation,” online here.) What implication does this apparent divergence between the Book of Abraham and Genesis hold for the historicity of the former? I am not sure how to answer this question, or if any such reconciliation is possible. These comments by Carr have prompted me just now to think about this aspect of the Book of Abraham’s creation account, which aspect I had heretofore ignored or otherwise neglected to ponder. I’ll get back to you as soon as (or if) I come up with something.

In the end, though, I agree with Carr’s assessment here.

The text [of Genesis] depicts the universe as a cosmic temple over which God presides and in which God offers God’s blessing. Within this context humans are depicted as earthly replicas of God (made in God’s “image and likeness”), reflecting God’s sovereign and creative power in the way that they “rule” over creation and themselves create children. It is not a scientific account of the origins of the universe, nor can it be made compatible with contemporary science. Instead, it is a story by theologians, meant to show God’s ultimate power over the universe and the ways in which humans share that power.

I have a blog post on this idea of the creation account in Genesis being a depiction of a “cosmic temple.” I believe one can make a good argument that such is the case. But should Latter-day Saints feel uncomfortable with reading Genesis as a non-scientific approach to creation? No. Here is Elder James E. Talmage in 1931. “The opening chapters of Genesis, and scriptures related thereto, were never intended as a text-book of geology, archaeology, earth-science or man-science. . . . We do not show reverence for the scriptures when we misapply them through faulty interpretation.” (James E. Talmage, “The Earth and Man,” address delivered in the Tabernacle, Salt Lake City, Utah, 9 August 1931. Originally published in the Deseret News, Church Section, 21 November 1931, 7–8.).

Remember, “myth” is not the opposite of “truth,” and the sweeping, grand, mythic cosmology of the books of Genesis, Moses, and Abraham isn’t lessened or diminished if it doesn’t fully accord with modern scientific understanding. We can appreciate these beautiful scriptural texts for what they are and still affirm their inspiration without fussing about trying to reconcile them with current scientific thought. For, as Daniel C. Peterson wisely observed, “If we scurry too hard to make our theology match the latest journal articles, we’re likely to find our theology out of sync with the next issue of that very journal. The final synthesis of science and religion is still quite some distance away — partially because scientific discovery itself is nowhere near coming to a halt. I wouldn’t expect it before the Millennium, at the very least.” (“Some Notes on Faith and Reason,” xvi, online here.)