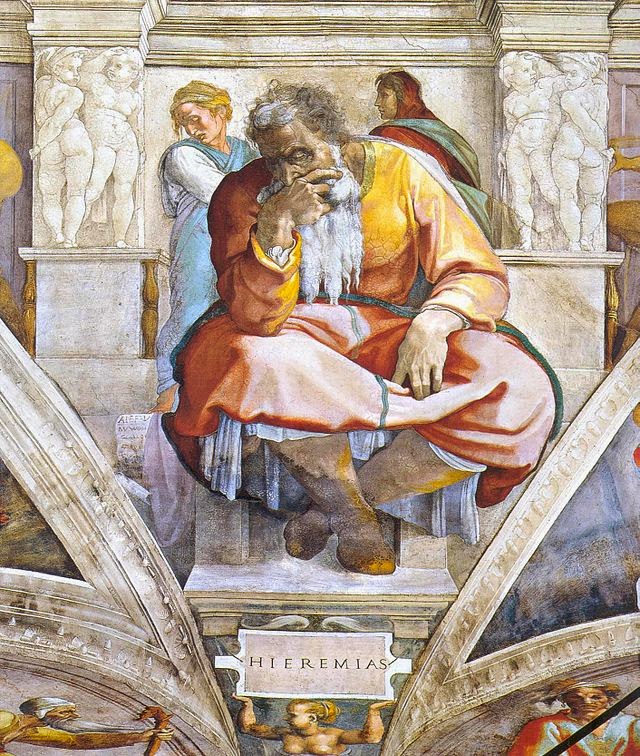 The prophet Jeremiah did not have an easy job. Besides being called to preach an unpopular message to a stubborn and wicked people, he was also confronted by plots to end his life, stonewalling and obfuscating Judahite magistrates, and false prophets who challenged his authority and predictions.

Jeremiah 23 records the activities of some of these false prophets.

In the prophets of Samaria I saw a disgusting thing: they prophesied by Baal and led my people Israel astray. But in the prophets of Jerusalem I have seen a more shocking thing: they commit adultery and walk in lies; they strengthen the hands of evildoers, so that no one turns from wickedness; all of them have become like Sodom to me, and its inhabitants like Gomorrah. (Jeremiah 23:13–14)

Concerning these malicious pseudo-prophets, the Lord says through Jeremiah:

Thus says the Lord of hosts: Do not listen to the words of the prophets who prophesy to you; they are deluding you. They speak visions of their own minds, not from the mouth of the Lord. They keep saying to those who despise the word of the Lord, ‘It shall be well with you’; and to all who stubbornly follow their own stubborn hearts, they say, ‘No calamity shall come upon you.’ (Jeremiah 23:16–17)

What follows the fierce denunciation of these false prophets is an arresting rhetorical question and the imagery of the divine council. “For who has stood in the council of the Lord so as to see and to hear his word? Who has given heed to his word so as to proclaim it?” (Jeremiah 23:18). The Hebrew literally asks: “Who has stood in the sôd of Yahweh [בסוד יהוה]?” This is a good question, since later we find out that not all of the prophets speaking in Jerusalem at the time were as privileged as Jeremiah, who evidently had stood in the divine council and was thus made privy to divine secrets (as revealed in vv. 19–20).

I did not send the prophets, yet they ran; I did not speak to them, yet they prophesied. But if they had stood in my council, then they would have proclaimed my words to my people, and they would have turned them from their evil way, and from the evil of their doings. (Jeremiah 23:19–20)

Once again, we see the Lord affirming that if these false prophets had but stood “in my sôd [בסודי],” they would’ve hearkened to Jeremiah’s message and repented; no doubt because they would’ve learned that Jeremiah was telling the truth all along!

But what exactly is this sôd? It is “an assembly of divine beings over which God presides,” remarks Leo G. Perdue in the HarperCollins Study Bible. “In this assembly God issues divine edicts for governing the cosmos and history.” It is also the secret instructions that Yahweh gives his celestial assembly and the prophets who are invited to participate. In Psalm 82 and 89 the divine beings who make up Yahweh’s “divine council” (Psalm 82:1; עדת־אל) or sôd (Psalm 89:8 in Hebrew) are called “gods” (אלהים) and “sons of gods” (בני אלים), respectively.

Evidently, then, one of the marks of a true prophet in ancient Israel, at least in the time of Jeremiah and a century or two before in the times of Isaiah (Isaiah 6) and Micaiah (2 Kings 22), is his having participated in Yahweh’s sôd. This gives new significance to a favorite scripture of the Latter-day Saints: “Surely the Lord God [אדני יהוה] will do nothing, but he revealeth his
secret [lit. “his sôd“; סודו] unto his servants the prophets [הנביאים]” (Amos 3:7).

But was Jeremiah the only prophet during this time who stood in Yahweh’s sôd? No. Lehi did as well, as recorded in 1 Nephi 1.

And being thus overcome with the Spirit, [Lehi] was carried away in a vision, even that he saw the heavens open, and he thought he saw God sitting upon his throne, surrounded with numberless concourses of angels in the attitude of singing and praising their God. And it came to pass that he saw One descending out of the midst of heaven, and he beheld that his luster was above that of the sun at noon-day. And he also saw twelve others following him, and their brightness did exceed that of the stars in the firmament. And they came down and went forth upon the face of the earth; and the first came and stood before my father, and gave unto him a book, and bade him that he should read. And it came to pass that as he read, he was filled with the Spirit of the Lord. And he read, saying: Wo, wo, unto Jerusalem, for I have seen thine abominations! Yea, and many things did my father read concerning Jerusalem—that it should be destroyed, and the inhabitants thereof; many should perish by the sword, and many should be carried away captive into Babylon. And it came to pass that when my father had read and seen many great and marvelous things, he did exclaim many things unto the Lord; such as: Great and marvelous are thy works, O Lord God Almighty! Thy throne is high in the heavens, and thy power, and goodness, and mercy are over all the inhabitants of the earth; and, because thou art merciful, thou wilt not suffer those who come unto thee that they shall perish! And after this manner was the language of my father in the praising of his God; for his soul did rejoice, and his whole heart was filled, because of the things which he had seen, yea, which the Lord had shown unto him. (1 Nephi 1:8–15)

Like Jeremiah, and unlike the contemporaneous false prophets, Lehi received his prophetic credentials from participating in Yahweh’s sôd. Nephi’s inclusion of this account of his father’s sôd experience, followed by an account of his own experience of the same, makes perfect sense from an ancient Near Eastern perspective. It served to establish the credentials and authenticity of Lehi’s prophetic call to warn Jerusalem of the impending Babylonian decimation of Judah. Like Jeremiah, Lehi was a true prophet, having had revealed to him Yahweh’s true sôd.