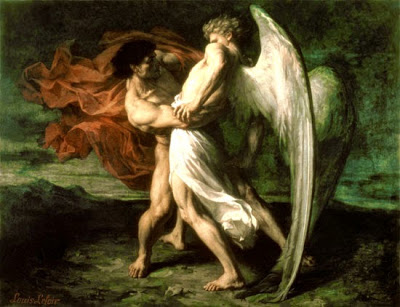 This evening I (finally) finished reading Terryl Givens’ excellent Wrestling the Angel: The Foundations of Mormon Thought: Cosmos, God, Humanity. (Before I say anything else, may I express my delight in Givens using a story from the Hebrew Bible to symbolize his treatise on Mormon theology?) Anyways, in a (simplistic) word, if I had to summarize which “version” of Mormonism I hold dearest in my heart, it is the Romantic Mormonism of Terryl Givens; if for no other reason than Romantic Mormonism appears, in my own estimation, to be the closest approximation to the metaphysics Joseph the Seer was trying to capture and impart to the Saints. In short, I think Givens comes more closer than anyone else in articulating the true vision of Joseph Smith’s theology.

To be sure, the modern Mormonism I practice has in many respects significantly moved beyond what Joseph articulated and taught during his ministry. That being said, I am confident that the essence of Joseph’s Romantic Mormonism can be found in the Church today, to say nothing of the keys of the priesthood and continuing revelation. I am grateful to Givens for describing and expressing that essence in a much better way than I could ever hope to.

Basically, if you want to know what I believe as a Latter-day Saint, I’d say go read Wrestling the Angel, The God Who Weeps, and The Crucible of Doubt. (If you want a single volume that best expresses my own views on the Book of Mormon, I’d recommend By the Hand of Mormon.) Givens has nearly perfectly voiced my own views on Mormon theology. If Goethe is my poetic muse, Brandon Flowers my musical muse, Caspar David Friedrich my artistic muse, then Terryl Givens (channeling Joseph, Brigham, and the Brothers Pratt) is my theological muse.

Ranting aside, I thought this concluding line from Givens was just great. “Mormon Restoration, in many cases, finds greater theological kinship with the ancient Christian past than the great age of reform. This fact may account in large measure for the dissonance contemporary Christians experience in the face of Mormonism’s unique body of teachings.”

In other words, the reason why Mormons are looked upon with suspicion by mainstream Christians today is because, iconically enough, Mormon doctrine predates the Reformation (with it’s theological accretions and interpolations) and anchors itself firmly in the soil of ancient (especially pre-Nicene) Christianity.

But what else would you expect?