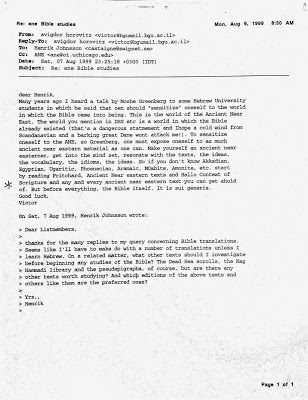 The biblical scholar Avigdor Horovitz wrote a brief email to Henrik Johnsson back in 1999 with some insightful advice on how to best study the Bible in its ancient Near Eastern context. Below is an image of the email exchange and my transcription. I got my hands on a copy of this exchange at some point during my time at BYU (from, I believe, Paul Hoskisson).

dear Henrik,
Many years ago I heard a talk by Moshe Greenberg to some Hebrew University students in which he said that oen should “sensitize” oneself to the world in which the Bible came into being. This is the world of the Ancient Near East. The world you mention in DSS etc is a world in which the Bible already existed (that’s a dangerous statement and Ihope a cold wind from Scandanavian and a barking great Dane wont attack me!). To sensitize oneself to the ANE, so Greenberg, one must expose oneself to as much ancient near eastern material as one can. Make yourself an ancient near easterner, get into the mind set, resonate with the texts, the ideas, the vocabulary, the idioms, the ideas. So if you don’t know Akkadian, Egyptian, Ugaritic, Phoenecian, Aramaic, MOabite, Amonite, etc. start by reading Pritchard, Ancient Near eastern Texts and Hallo Context of Scripture and any and every ancient near eastern text you can get ahold of. But before everything, the Bible itself. It is sui generis.
Good luck,
Victor

thanks for the many replies to my query concerning Bible translations. Seems like I’ll have to make do with a number of translations unless I learn Hebrew. On a related matter, what other texts should I investigate before beginning any studies of the Bible? The Dead Sea scrolls, the Nag Hammadi library and the pseudepigrapha, of course, but are there any other texts worth studying? And which editions of the above texts and others like them are the preferred ones?

A brief note or two. Horovitz’s comment about “a cold wind from Scandanavian and a barking great Dane” is probably referring to biblical “minimalists” such as Niels Peter Lemche and Thomas L. Thompson of the Copenhagen School and the Englishman Philip R. Davies. The mention of “Pritchard, Ancient Near eastern Texts” is to the anthology of texts edited by James B. Pritchard. The mention of “Hallo Context of Scripture” is also clear. (Incidentally, both of these are excellent collections of texts.)

I love Horovitz’s advice about studying the ancient Near East, and especially his comment at the end: “But before everything, the Bible itself. It is sui generis.”