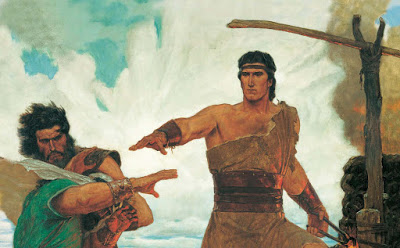 From time to time I have had friends, missionaries, and other members of The Church of Jesus Christ of Latter-day Saints ask me what I make of any supposed connection between Nephi, the opening author of the Book of Mormon, and the Nephilim of Genesis. The Nephilim, you will recall, are mentioned in Genesis 6 as the apparently unholy issue of the sons of God (בני אלהים) mating with human females.

When people began to multiply on the face of the ground, and daughters were born to them, the sons of God saw that they were fair; and they took wives for themselves of all that they chose. Then the LORD said, “My spirit shall not abide in mortals forever, for they are flesh; their days shall be one hundred twenty years.” The Nephilim were on the earth in those days—and also afterward—when the sons of God went in to the daughters of humans, who bore children to them. These were the heroes that were of old, warriors of renown. (NRSV Genesis 6:1–4)

The exact nature and origin of the Nephilim is obscure, but they appear to have been viewed anciently as quasi-mythical, primordial “giants” that roamed the land of Canaan (cf. Numbers 13:30–33). How did we get the impression they were “giants”? For English-speaking Latter-day Saints its because of how the KJV renders v. 4 of this passage: “There were giants in the earth in those days.” The word rendered “giant” in the KJV is the name for the Nephilim (נפלים). The King James translators, evidently unaware of what to do with this noun in this instance, punted by following the Septuagint, which renders נפלים as γίγαντες. It is possible that the translators of the Septuagint rendered נפלים so because of the influence of contemporary, popular Greek hero-myths involving larger-than-life demigods and the like.
The only problem, of course, is that the verbal root for נפלים has long been recognized as simply נפל (npl), meaning “to fall.” The Nephilim are “the fallen ones” who, having transgressed “the all-important boundary between the divine and the human” established by God at Creation, are the catalyst for the violence and evil that will result in God cleansing the earth with a flood.[1] Even if we follow the translators of the Septuagint in rendering Nephilim as giants, “there is no archaeological evidence to support the view that the pre-Israelite inhabitants were giants; to attribute great size to them was probably a narrative way of expressing their military prowess.”[2]
For Latter-day Saints, however, there are additional elements that entice them to make a (bizarrely misguided) connection between the beloved, righteous Book of Mormon prophet and the murderous, abominable offspring of fallen angels.
First there are the similarities between the two names. At first glance it seems obvious: Nephi/Nephilim. Below the (English) surface, however, the water quickly gets murky. For starters, the name Nephi almost certainly derives from the Egyptian nfr, not the Hebrew npl.[3] The similarities between the two names in English are merely coincidental; less-technical conventions of transliterating the Masoretic voweling of נְפִילִים‎ (nĕpîlîm) make it appear like it’s related to the name Nephi, but the appearance is illusory.
But what about Nephi’s self-description that he was “large in stature” (1 Nephi 2:16)? Surely, some Latter-day Saints have speculated, this must mean Nephi had some kind of connection with the Nephilim. Perhaps he was even a descendant of them! Immediately the objection comes to mind that Nephi calling himself “large in stature” is tremendously vague. What exactly does he mean by this? How large is “large” for Nephi? 5 feet? 6 feet? 12 feet? 20 feet? He never says.
Additionally, how literal was Nephi in this description? Notice that his self-description of being “large in stature” is contrasted with his “being exceedingly young,” and is also connected with his “having great desires to know of the mysteries of God” (v. 16). Was this a spiritual stature? Was this idiomatic for Nephi saying he had great courage in the face of obstacles, as my friend Ian Forsyth has suggested? How can we know? The text isn’t clear. To simply assume Nephi must have meant he was the teenage André Roussimoff of pre-exilic Judah is odd indeed. Are we really to imagine a hulking Nephi lumbering his way through the darkened streets of Jerusalem trying to pass himself off as Laban? Would a “giant” Nephi even have been able to fit into Laban’s clothes?
So if the etymological connection between Nephi and Nephilim doesn’t work, and if it must be assumed that “large in stature” = “giant” is the right reading of 1 Nephi 2:16, then what are we left with to make a plausible connection? Basically nothing. Personally, I think it’s time to put this speculation to rest.
–Notes–
[1]: Adele Berlin and Marc Zvi Brettler, eds., The Jewish Study Bible (New York: Oxford University Press, 2004), 21.
[2]: Richard J. Clifford, “giant,” in The HarperCollins Bible Dictionary, ed. Paul J. Achtemeier (San Francisco: HarperCollins, 1996), 376.
[3]: John Gee, “A Note on the Name Nephi,” Journal of Book of Mormon Studies 1, no. 1 (1992): 189-191; “Four Suggestions on the Origin of the Name Nephi,” in Pressing Forward with the Book of Mormon, ed. John W. Welch, and Melvin J. Thorne (Provo, Utah: FARMS, 1999), 1-5.

10 thoughts on “Nephi Among the Nephilim”