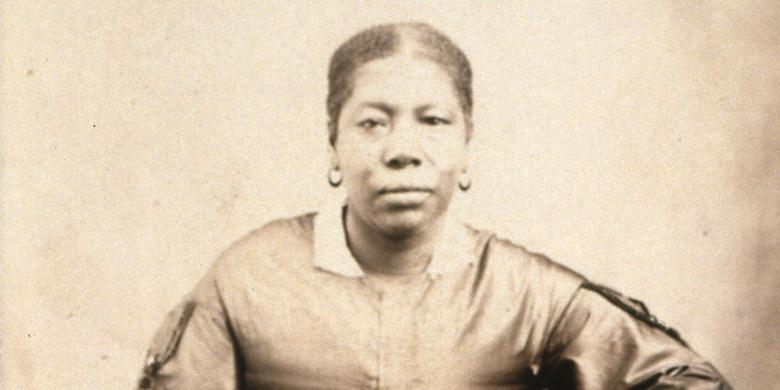 Last week saw the unfolding of what my friend Tarik LaCour has called Streetergate. To summarize the incident, on Thursday, May 17, 2018, just as LDS Church leaders were meeting with leaders from the NAACP, an ex-Mormon blogger named Jonathan Streeter created a website parodying the Church’s official newsroom and crafted a fake apology from President Russell M. Nelson for the now-rescinded priesthood and temple ban against individuals of African descent.

While ex- and progressive Mormons lauded and defended Streeter for “starting a conversation” about racism in the Church, others were not so pleased. This includes, well, actual black Mormons, who were “traumatized” (to use their words) by Streeter’s deception.

Zandra Vranes, one of the Sistas in Zion, explained in an emotional video how Streeter’s actions were outright manipulative and deceitful to black Mormons who have very personal emotional and spiritual stakes in whether the Church offers a formal apology for the priesthood and temple ban.

Another black Latter-day Saint, Janan Graham-Russell, took to Twitter and issued a series of explicit and condemnatory tweets registering her disapproval of Streeter’s actions. She mentions in one tweet how she’d “spoken to black folks in tears because they thought it was real as well.”

Got the official word that this isn’t real. I normally don’t cuss on here but f*** the person(s) who did this. They’re testing to see how they’ll respond. In terms of change in the LDS Church, one of the more effective strategies is to draw a big spotlight on it. https://t.co/qrWwSvEiM5

My friend Kwaku El, a black convert to Mormonism, himself felt that Streeter’s little stunt was “meant to traumatize a large group of members,” namely, black Mormons. Streeter, he insisted with considerable justification, “spends his life lying, slandering, [and] attacking people of faith – especially when they are of color.” This is echoed by my friend Tarik, who is also a black Mormon convert. “The only words to describe [Streeter’s] act are evil and sadistic,” he wrote me in a personal message. “I don’t use those words often, but the fake apology along with the mocking of the Sistas of Zion warrant that pronouncement.”

(The mocking Tarik is referring to can be seen here, where Streeter reacted to Zandra’s video with three laugh/smile emojis.1) 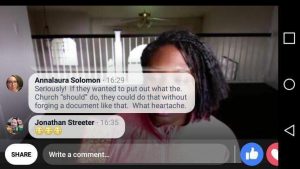 Examples could be multiplied, but the above should suffice in giving the general thrust of how black Mormons have overwhelmingly responded to Streeter. They are, to put it mildly, not amused. My friend Walker Wright explained on Facebook how Streeter’s actions were problematic thus:

A deadbeat dad walks out on his wife and child. The child is traumatized by the abandonment. Then, one Christmas, Mom tells the kid, “Daddy’s coming home for Christmas!” The kid is super excited. Christmas morning comes around and no dad. Turns out Mom lied to her kid because she hates the dad and wants the kid to hate the dad as well.

The dad’s abandonment is terrible and without a doubt the larger context. But exploiting the suffering of the child by lying and retraumatizing them because you have an ax to grind is nowhere in the vicinity of decency.

“But which one is worse? The dad is the one who actually left!”

“Well, what’s the root of the trauma? If the dad hadn’t left, the lie wouldn’t have been a thing!”

For their part, Streeter and his apologists have reacted to these criticisms with essentially “it’s just a prank, bro!” And besides, Streeter and his apologists have insisted, the real culprit here is the LDS Church, which, they maintain, is unrepentantly racist. (Many of them, unsurprisingly, even openly question why in any event black Mormons remain Church members.) By publishing a fake apology for racism on a deceptively fabricated LDS newsroom lookalike, Streeter was able to “start a discussion” that will hold the LDS Church responsible for its racial sins.

So it would seem that for Streeter and his apologists, the emotional manipulation of black folks is a small price to pay to allow white ex-Mormons the privilege to “start a discussion” about racism in Facebook echo chambers.

This entire spectacle has prompted me to reflect on what I have come to call Vicarious Performative Wokeness (VPW) among white ex- and progressive Mormons. In short, VPW is the phenomenon wherein self-anointed “woke” ex- and progressive Mormons who have thrown off the shackles of their racist religious upbringing assume a transcendent moral plane above their benighted former co-religionists by performing a woke routine that channels a vicarious outrage on behalf of black Latter-day Saints.

There’s a bit to unpack here, which I’ll try to do so succinctly.

Vicarious: white ex-Mormons who exhibit VPW do so by vicariously expending the feelings and spirituality of black Mormons. For instance, they might, as already mentioned, openly question how a black person could remain a member of the LDS Church given the history of the priesthood and temple ban. Or, in the case of Streeter, they might intimate that these black folks are the helpless victims of the Church’s mental conditioning. (“It’s very natural for them to lash out against me . . . because it’s not in their nature to criticize their church.”) Whatever the manifestation, the bottom line is these white ex-Mormons vicariously convey the outrage they think faithful black Mormons should have against their religion for them.

Performative: white ex-Mormons who exhibit VPW are essentially playacting. In order to safeguard and increase their social capital among likeminded online dramatis personae, these individuals must make it abundantly clear that not only are they not racist, but that everybody knows just how not-racist they are. This includes taking to blogs, podcasts, Reddit, Facebook, Twitter, and other media to enact elaborate “look at how not racist I am” pageants. Of course, since this is performative, the racism remains firmly fixed under an online facade of woke memes and hot takes about how Brigham Young was evil and posts about how many times the VPW performer has listened to Hamilton that day.

Wokeness: this component should be obvious. Wokeness is here defined as the state of being cognizant (“woke”; as in “awoken”) of the racial evils that beset Mormonism specifically and the human condition generally.

To be sure, not all ex- and progressive Mormons who express outrage over racial injustice in Mormonism are acting in bad faith. There are sincere ex- and progressive Mormon men and women who are honestly (and rightly) disturbed at the racism that is unfortunately encountered in the Church to this very day. But many ex- and progressive Mormons are, in fact, merely engaging in VPW. This has become abundantly clear over the past few days. Instead of responding to the very real hurt feelings of black folks with contrition, Streeter and his apologists instead refuse to apologize (especially ironic in this instance) and double down on their racism; thereby revealing that their “seemingly good feelings” which they have feigned to show black Mormons who struggle with lingering racism in the Church are “more pretended than real” (JS–History 1:6).

Now I realize that this all might come across as a bit overwrought or unfair towards ex- and progressive Mormons, and to Jonathan Streeter and his apologists specifically, and if it is, I beg the pardon of any such persons so offended.

After all, I’m just trying to start a discussion.