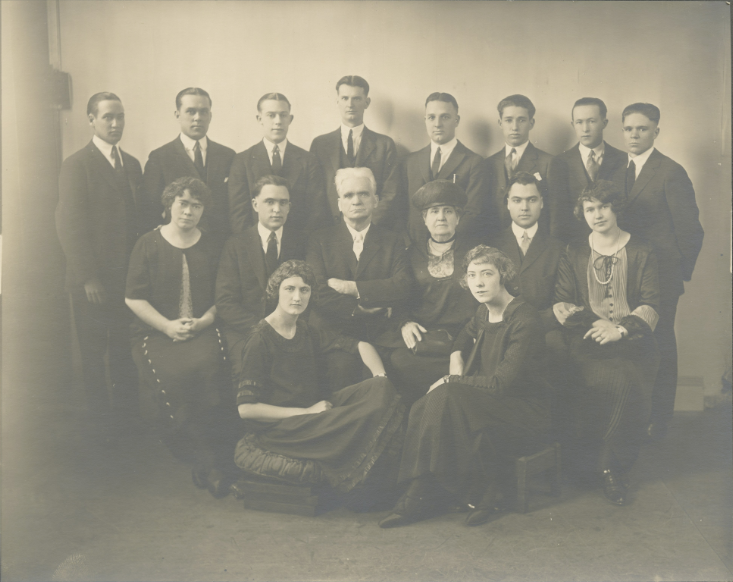 In my blog post of August 11, 2020 (“B. H. Roberts and the Book of Mormon: Exhumation and Reburial”) I argued against the claim that Brigham Henry Roberts (1857–1933) lost his faith in the Book of Mormon as a book of ancient scripture. With this argument I was, in part, responding to a recent Master’s thesis by Shannon C. Montez—“The Secret Mormon Meetings of 1922.” (I was mostly responding to John Dehlin’s characteristic chicanery in how he framed the issue, but Montez’s thesis, which I had recently read, was also on my mind.) In both her thesis (22n49) and in a comment she left yesterday on my post, Montez cited a radio address given by Roberts in 1924 as “one example of his wavering commitment to [the Book of Mormon’s] historicity.” According to Montez:

[Roberts] called the Book of Mormon an “alleged volume of sacred, American History and Revelation” and quoted the scripture “Adam fell that men might be….” as “one of the Mormon Prophet’s noblest utterances.” In Mormon belief, it was Lehi, not Joseph Smith, that wrote such a line; most Mormons would not credit any of the Book of Mormon’s words to Joseph Smith.

When Montez drew my attention to this address last night, I confessed that I had never before seen it, or was otherwise unfamiliar with its contents. I was unable to find a digitized version of the speech online, although I did see that a transcript of it is held in the B. H. Roberts papers at the University of Utah (Box 10, Folder 10) and that John W. Welch had previously cited the address in a 1992 article.

Thanks to my friend Matthew Roper, a true archival bloodhound, I now have in my possession a copy of a transcript of Roberts’ speech. I have reproduced it below both as a downloadable PDF and as embedded images. I have been unable to confirm if this transcript (which Roper believes was done in the early 1980s) is a faithful copy of the one housed in Roberts’ papers at the University of Utah. I shall proceed with the assumption that it is. If it is not, I welcome any correction.

At the outset of the speech, it is clear that Roberts is not addressing (at least solely) Latter-day Saints, but rather “ladies and gentlemen of the radio audience.” In other words, Roberts was addressing a wide, national audience. “In the mid-1920s,” notes one writer, “the radio audience was often painted with a broad brush that treated every listener like every other listener and often failed to hear the differences between them.”1 This explains why, as Montez noted, Roberts used some qualifying language in his address. He was at the time the mission president of the Eastern States Mission and was speaking to a mixed audience. He thus employed a strategy of creating a middle ground of sorts to make his remarks more palatable to both parties (in this case, Latter-day Saints and non-Latter-day Saints) in the audience.

As Montez correctly points out, in the address Roberts speaks of the Book of Mormon as “this alleged volume of sacred, American History and Revelation.” This could, again, be accounted for by considering Roberts’ mixed audience, as well as the fact that this comment was made in the context of the book triumphing over the mockery and derision it had heretofore endured: “Mockery of [the Restoration’s] chief product in the way of newly discovered scripture—’The Book of Mormon’—has not destroyed interest in this alleged volume of sacred, American History and Revelation.” It seems to me that “alleged” in this context should not be read as Roberts distancing himself from the book’s historicity (more on this below), but rather as him qualifying it the same way Joseph Smith or his clerks at the Times and Seasons print shop qualified the Book of Abraham as “purporting to be the writings of Abraham” when it was first published for the general public.

The same goes for Roberts’ comment, also noted by Montez, that (speaking of the claims made in the Book of Mormon) “if all this were not true, it might well be hoped that it was true.” Here is the full context of Montez’s excerpted quote:

Following its bold and unique initiative, “Mormonism” announced a revelation respecting America and her ancient inhabitants that was equally astounding and appealing. Who were these people of the western world discovered with their continent four hundred years ago? Were they children of the Most High? And if so had God left himself without witnesses among them? To this question men could give no answer. But “Mormonism” did by producing an American volume of scripture written and compiled by their prophets, proclaiming not only an Israelitish origin for the people, but giving an account of the resurrected Christ’s personal visit to them, after his departure from Judea; also the proclamation of the one and “Everlasting Gospel” to them by the Christ; the founding of a church; and at the necessary departure of the Son of God from their midst, a promise given of a future return, and a personal reign with the righteous in a Kingdom of Glory. If all this were not true, it might well be hoped that it was true, for it should say so much in vindication of the justice of God in not allowing whole continents of people to perish in ignorance of God’s plan of human salvation. It would add so much to the vision of a loving Christ, this visit to the people of America, and the establishment of his Gospel and his church among them: It would mean so much to the present distraught Christendom if a New Witness could be found in the voice of the sleeping nations of ancient America, testifying to the Deity of the Christ; to the reality of the resurrection from the dead, and the life everlasting. To the Latter-day Saint this is what the Book of Mormon is, A New Witness for God, and for the fundamental truths of the old Christian faith. This is what it does for him: strengthens his faith, but increasing the evidence on which that faith rests; makes brighter his star of hope of the life everlasting; his church, rising out of all this, and guided by continuous revelation,—abiding in touch with God—becomes for him a present temple of God, built up of living stones wherein is not darkness or doubt. Does all this excellent initiative and procedure in the founding of a great religious movement arise merely from the happy and forceful but eratic [sic] cogitation of an ignorant youth, Joseph Smith? Or is there something more in it than that?

The rhetorical nature of Roberts’s qualifications is obvious from context. He is not himself expressing doubt, but is using the common rhetorical technique of priming his audience to consider the benefit of adopting his own position by teasing out the implications of what the truth of his proposition would mean. His concluding question (“Or is there something more in it than that?”) signals plainly that Roberts wanted his audience to consider that there was indeed something more to “Mormonism” and the Book of Mormon than merely “the happy and forceful but eratic [sic] cogitation of an ignorant youth.”

Finally, Montez points out that the scripture in 2 Nephi 2:25 (“Adam fell that men might be; and men are, that they might have joy.”) is attributed by Roberts to Joseph Smith, not Lehi. It should also be noted that Roberts attributes passages from the Doctrine and Covenants (e.g. D&C 93:36; 130:2, 20; 131:6) to Joseph Smith, even though the first quoted verse purports to be a revelation from God. Again, Roberts’ mixed audience could account for this, as well as the fact that in his own theory of the translation of the Book of Mormon, Roberts ascribed the English text of the Book of Mormon to Joseph Smith as the book’s translator.2 This point on its own, therefore, does little to prove that Roberts was vacillating on his faith in the Book of Mormon.

But I invite readers to judge for themselves. Here is a PDF copy of the transcript of the talk, and below is the address in full. 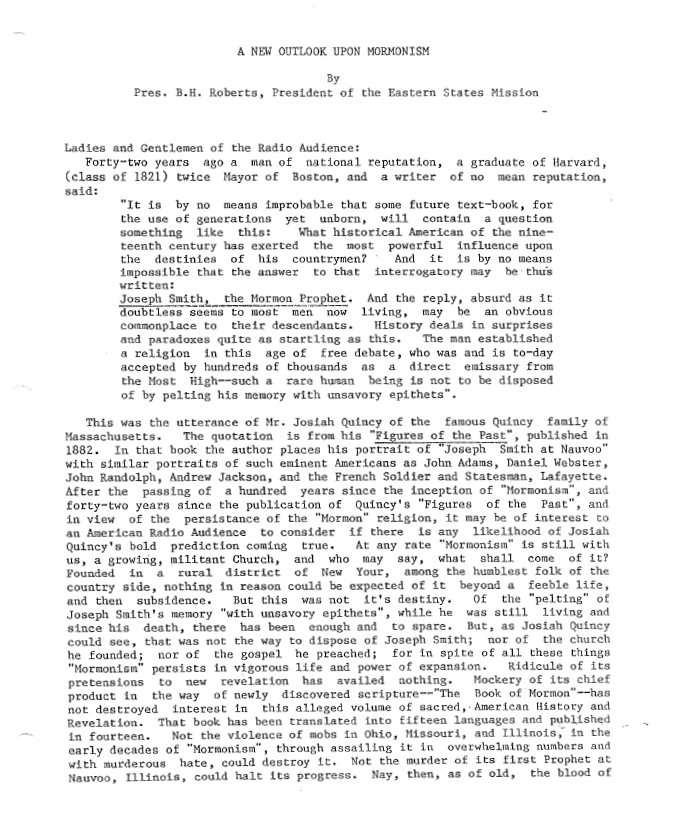 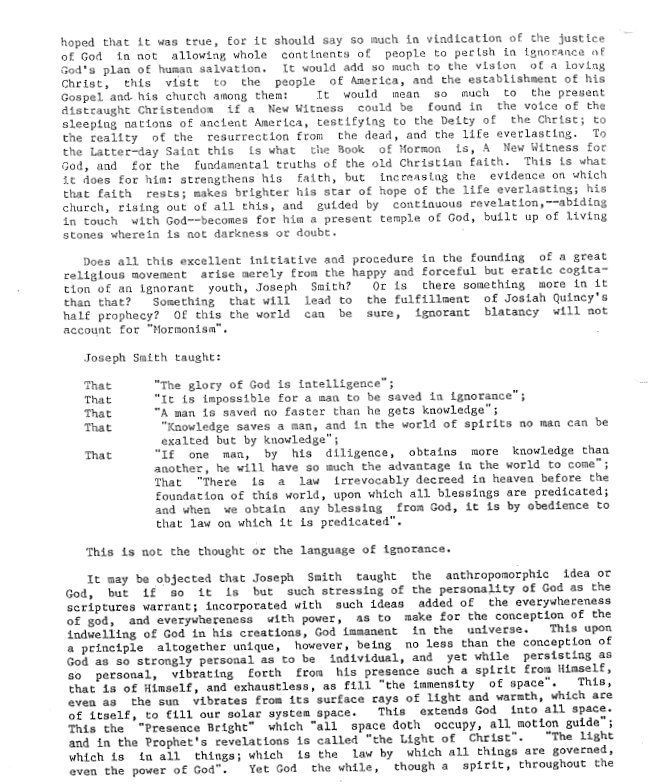 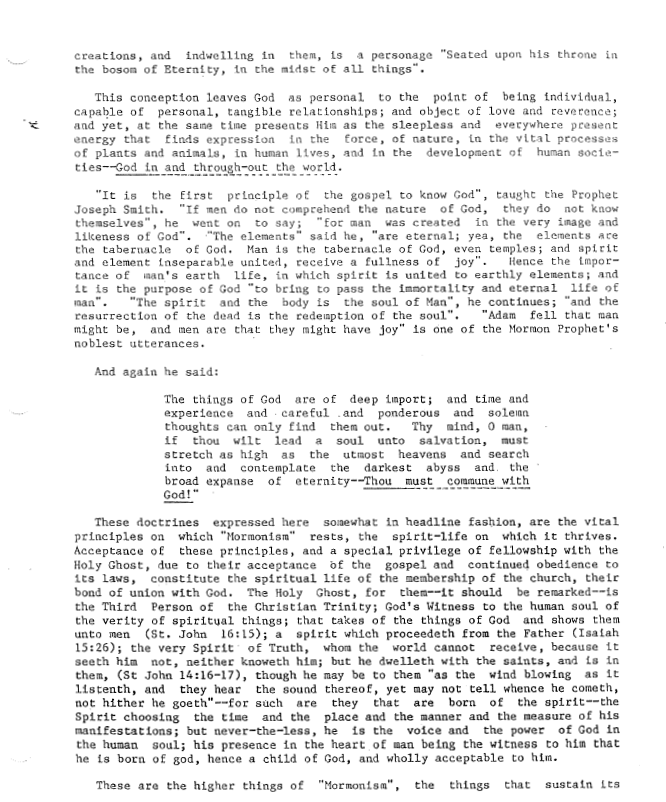 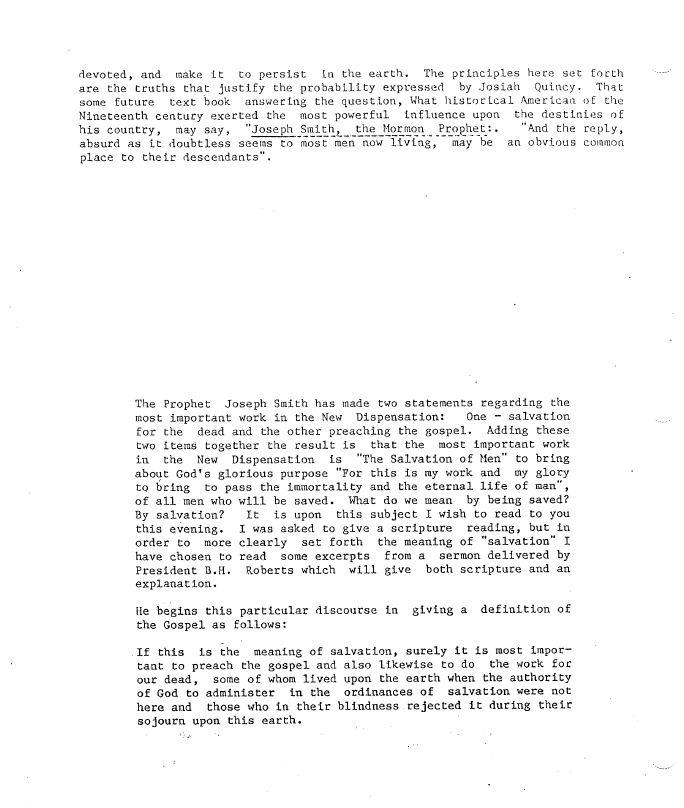 5 thoughts on “B. H. Roberts and the Book of Mormon: An Addendum”