Some time ago I posted a blog entry at Interpreter on the atheist polemicist Richard Dawkins’ argument that the Book of Mormon is a fraud because Joseph Smith rendered his translation into Jacobean English. Dawkins’ argument is (and I’m not making this up) that “[the Book of Mormon] was a 19th century book written in 16th century English. That’s not the way people talked in the 19th century – it’s a fake. So it’s not beautiful, it’s a work of charlatanry.”

Imagine my pleasant surprise when I read Ziony Zevit’s discussion of the Hebrew language in his excellent new book What Really Happened in the Garden of Eden?[1] Zevit discusses the evolution of Hebrew by tracking it’s different historical phases, including: “Archaic Hebrew, Standard or Classical Iron Age Hebrew, in which most of the Hebrew Bible is written, and Post-Exilic Hebrew.”[2] As Zevit explains:

Standard Iron Age Hebrew was employed from 1000 until 586 BCE–––the year Nebuchadnezzar’s army captured Jerusalem, destroyed Solomon’s temple, and exiled leading families from Judah to Babylon. It continued in use around Jerusalem until around 520 BCE. Then, under the impact of large groups of returnees from Babylon in the fifth century BCE, people whose Hebrew had been affected by the pronunciation habits, vocabulary, and syntax of their spoken Aramaic and Akkadian dialects, Standard Iron Age Hebrew changed.[3]

This is all fine and well, but what, one might be wondering, does this have to do with the Book of Mormon? Zevit explains how this shift in Hebrew made it necessary for revisers or redactors to “update” the Hebrew of the Old Testament to meet the needs of contemporary speakers of Hebrew. However, as Zevit explains:

The ancient revisers retained archaic Hebrew in only some tightly wrought poetry, such as the Song of Lamech (Gen 4:23–24), Blessings of Jacob (Gen 49), Song of Heshbon (Num 21:26–30), Songs of Balaam (Num 23–24), and the Blessings of Moses (Deut 33:1–29). The language of these ancient poems did not lend itself to updating without destroying their literary quality, and so they were left more or less alone. Where they occur in historical narratives within the Pentateuch, these poems provided a touch of textured, linguistic authenticity, reminding the audience that the characters in the story did not actually speak “modern” Iron Age Hebrew but an archaic form of the language.[5]

In other words, in some instances the revisers choose to retain an archaic form of Hebrew for literary purposes, even though, to paraphrase Dawkins, “that’s not the way people talked” at the time of the Bible’s literary “update,” as it were.

By the way, this is not the only time ancient Jews of a later time in Israel’s history employed an archaic, outdated form of Hebrew. During the Bar Kokhba revolt (132–136 CE) against the Romans, “insurrectionists minted coins to demonstrate their independence. Over 80 percent of these coins mention Jerusalem, and all symbols on the coins relate to the holy city, showing its importance as the center of national identity.”[6] But here’s the kicker. “Like their predecessors, these coins are decorated with . . . paleo-Hebrew script.”[7] The Hebrew script on these coins is not the Hebrew of 2nd century CE Judea. It is, instead, the paleo-Hebrew script of several centuries earlier. This was probably done in an attempt by Bar Kokhba and his confederates to recapture the glory of the “good old days” when the Davidic kingdom was at the height of its power (something Bar Kokhba was trying to imitate).

Also, since Zevit mentions him, it’s also worth noting that “Nebuchadnezzar borrowed titles and concepts from the Old Babylonian Period, and his scribes not only copied Old Babylonian texts, but in some cases imitated the archaic cuneiform script of that earlier era.”[8]

So, if ancient Jews and Babylonians are allowed to use outdated, archaic forms of their respective languages, why isn’t Joseph Smith allowed to do it? 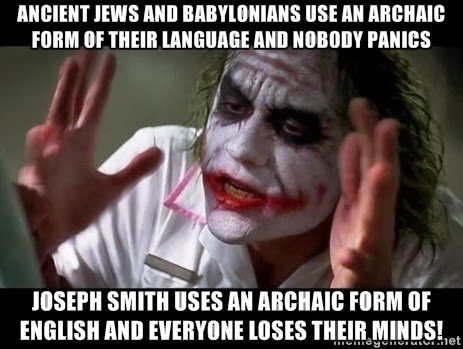 [6]: Lee I. A. Levine, “Judaism from the Destruction of Jerusalem to the End of the Second Jewish Revolt: 70–135 C.E.,” in Christianity and Rabbinic Judaism: A Parallel History of Their Origins and Early Development, ed. Hershel Shanks (Washington, D.C.: Biblical Archaeology Society, 1992), 142.