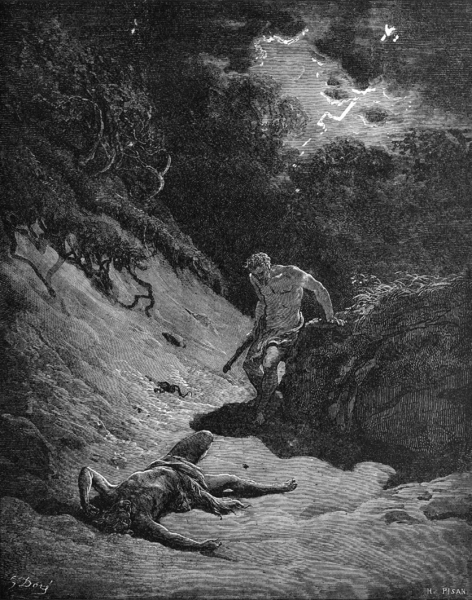 I continue to be highly impressed by Ziony Zevit’s new book What Really Happened in the Garden of Eden? Zevit’s analysis of the Garden of Eden pericope in Genesis is very informative. Here is another instance of an insight that comes Zevit’s close reading of the text.

The story [in Genesis] implies the existence of other people, people formed before the ‘ādām or at the same time but in a different place for a different reason. Adam’s guarding function was to protect the Garden from them. The existence of these other people is also presupposed elsewhere in the primeval history.
Qayin [Cain], sentenced to be a wandered after killing his brother, complains that “anyone who finds me will kill me” (Gen 4:14). God acknowledges the validity of Qayin’s observation and comforts him by threatening vengeance on anybody who kills him: “whoever kills Qayin, he will be avenged sevenfold”; that is, if you will Qayin, seven of your family will die. Moreover, God provides Qayin with a sign, a conventional indicator recognizable by these other people, warning them to leave him alone (Gen 4:15). Had the author and his audience not understood that other people lived in the inhabitable world outside Eden, the narrative elements of Qayin’s fear, God’s warning, and the use of a sign would have made no sense. Extrapolating from these minor assumptions, it appears that the author understood that Qayin later settled among some of these other people in the land of Nod, where he found a woman to be his wife (Gen 4:16–17).
The extant biblical narrative, however, is uninterested in these other people because it traces the genealogical descent of all humans known to Israel back to Noah and his family, and from them back both through Qayin (Gen 4:16–17; 5:28), and thence back to Adam and Hawwa [Eve]. Other people, whatever their story–––a fragment of which is embedded in Genesis 6:1–4–––were among those wiped out in the flood along with most of Adam’s descendants (Gen 6:5–7, 13).

Of course, any Latter-day Saint who has read the work of B. H. Roberts or Hugh Nibley knows that the idea of “pre-Adamites” is certainly a potentially viable way to reconcile Genesis with evolution. I am not necessarily saying that this is the answer for reconciling the two, but it may be a good approach. If nothing else, Zevit’s insights here may help in this regard.