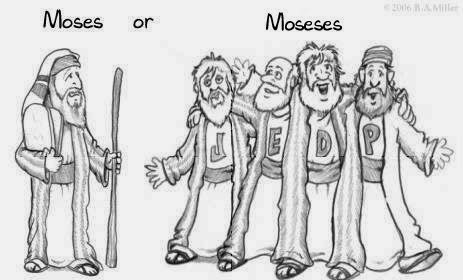 David Bokovoy will soon be releasing the first volume of his three-volume series Authoring the Old Testament. In this series, Bokovoy will, among other things, present and argue for the Documentary Hypothesis (DH) to an LDS audience. He will not only discuss what the DH says about the authorship of the Pentateuch, but will also apply the methods and findings of the DH to the Book of Mormon, the Book of Moses, and the Book of Abraham. His books should prove to be provocative (and perhaps challenging) for the average LDS reader, though members of the Church who have training in or exposure to modern scholarly theories about the Hebrew Bible probably won’t be too surprised with what Bokovoy has to say about the authorship of the Pentateuch (the first five books of the Bible).

Before I proceed any further, I will, for the sake of any of my readers who aren’t familiar with the DH, briefly summarize the DH. As explained by Richard N. Soulen and R. Kendall Soulen, the DH is “a theory concerning the origins of the Pentateuch that [argues that the Pentateuch is composed of disparate sources that were] combined and revised over several centuries from varying historical and theological points of view.” These sources, according to source critics who argue for the DH, “could be (fairly) precisely dated and placed in an evolutionary sequence.”

For an illustration of what was hypothetically contained in these sources, see the chart below (click on the chart to zoom). 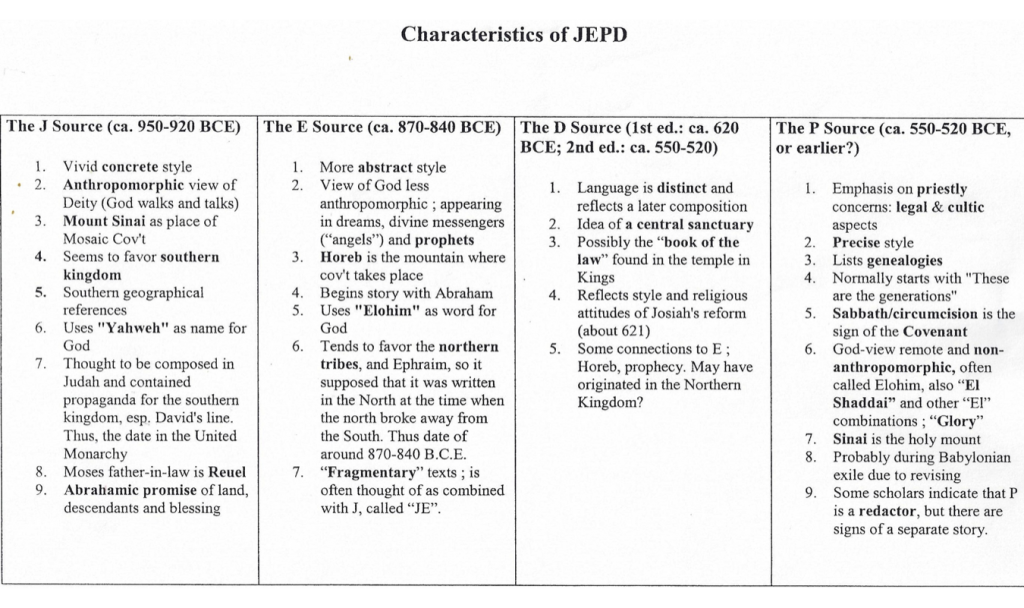 Although various scholars have finessed the details of the hypothesis, including the dating of the sources’ composition and redaction, this is, I think it’s safe to say, the standard approach to the DH. I also think it’d be safe to say that the DH is to biblical (or at least Pentateuchal) scholarship as Darwinian evolution is to biological science–––it is the prevailing paradigm in current biblical scholarship.

Now, obviously, if this hypothesis is correct, then some fellow named Moses (if indeed he was even a historical figure and not an invented, mythic figure as most biblical scholars would say today) couldn’t have sat down and composed the Pentateuch sometime circa 1200 BCE. The DH, then, directly challenges traditional belief of Christians and Jews that Moses is the author of the five books that today bear his name.

But what’s more, this hypothesis has significant ramifications for other Latter-day Saint books of scripture, particularly the Book of Mormon, the Book of Moses, and the Book of Abraham. The DH, in many ways, challenges the traditional LDS paradigm or assumptions about the historicity of these books. Although I have not yet read Bokovoy’s treatment on this topic as found in the pages of his book, having read some of Bokovoy’s comments on various blogs, I am already aware of the fact that he not only is not oblivious to the challenges the DH poses to traditional LDS understanding of these texts, but also that he in fact strongly advocates changing the traditional LDS understanding so as to incorporate the arguments and conclusions of the DH.

So what is my attitude towards the DH? I can say it in two words: cautious optimism. Allow me to explain.

I first learned about the DH in high school as I read about it in my own personal studies. As I’ve studied it at BYU (lest anyone tell you differently, BYU’s Ancient Near Eastern Studies program does in fact teach the DH as part of its required instruction), I’ve continued to find the DH to be an interesting and important topic, and have even done class presentations on the DH from a Mormon perspective. As I’ve grappled with the DH, one of the things I’ve come to realize is that Latter-day Saints should not, in principle, be scandalized by by any hypothesis that speaks of scripture being the product of redacted sources. The Book of Mormon and the Doctrine and Covenants are just that: scriptures composed of redacted sources. One could very easily go through the Book of Mormon (as has been done) and catalogue the documentary sources Nephi, Mormon, and later Moroni all used in composing and compiling their records.[2] The chart below should illustrate this concept nicely (click on image to zoom).

The same goes for the Doctrine and Covenants. The good folks at the Joseph Smith Papers have, among many other wonderful things, illuminated a much clearer history of the composition and redaction of not only the early revelations that were compiled as the Book of Commandments and later the Doctrine and Covenants, but also Joseph Smith’s history that would be canonized in the Pearl of Great Price (see here, here, and here).

Historically speaking, Mormons have had varied opinions about the DH. As explained by Phillip Barlow in his excellent volume Mormons and the Bible, although the views of vocal opponents of the DH like Bruce R. McConkie and Joseph Fielding Smith have mostly prevailed in the Church, other Mormon leaders and scholars have been more open to the ideas of the DH.[3] Consider this statement by Brigham Young, for example, given in 1871.

As for the Bible account of the creation we may say that the Lord gave it to Moses, or rather Moses obtained the history and traditions of the fathers, and from these picked out what he considered necessary, and that account has been handed down from age to age, and we have got it, no matter whether it is correct or not. (Journal of Discourses 14:116)

Notice too this entry under “Pentateuch” in the Bible Dictionary of Church’s edition of the Bible. “The Pentateuch was written by Moses, although it is evident that he used several documentary sources from which he compiled the book of Genesis, besides a divine revelation to him.”

Although these views do not fully accord with the standard expression of the DH, they do follow the spirit of the DH; that is to say, the idea that the Pentateuch was potentially compiled together from documentary sources is not totally alien to Mormon thought. 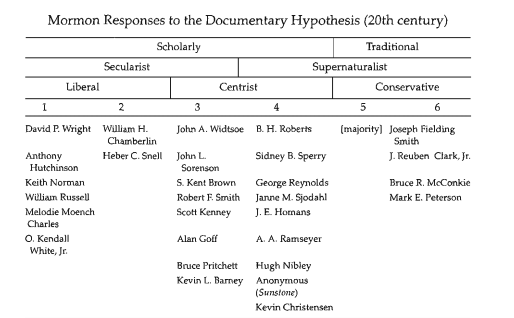 The point of all of this is to say that opinions about the DH have ranged in Mormonism. As such, I am not intrinsically opposed to what source critics using the tools of the DH are trying to do, and I believe that a Mormon paradigm can incorporate something like the DH. I’m therefore optimistic about the DH.

However, I am, as I said, also cautious about the DH. Although the DH has garnered wide (nearly universal, actually) acceptance among biblical scholars, others have articulated objections to the theory on a number of grounds. The first, and most obvious, problematic aspect of the DH that scholars have drawn attention to is the fact that it is totally hypothetical or theoretical. I don’t say this like young earth creationists might say to dismiss evolution (“It’s only a theory”), but to raise the point that there is, even the most ardent proponent of the DH must acknowledge, no empirical basis for the DH. None of the hypothesized source documents (J, E, D, or P) have actually turned up as physical texts that can be read, translated, dated, compared, etc. This is a point that has been raised by the pugnacious (but no less entertaining or formidable) Egyptologist Kenneth Kitchen.

The basic fact is that there is no objective, independent evidence for any of these four compositions (or for any variant of them) anywhere outside the pages of our existing Hebrew Bible. . . . They exist only in the minds of their modern creators . . . and as printed in their publishes studies, as theoretical works abstracted out of the standard text of the Old Testament books that we do have. This very simple fact needs to be stressed. Our resourceful biblicists are not sitting on some secret store of papyri or parchments that contain any such works. The Dead Sea Scrolls show no sign of them whatever. . . . Modern guesswork, as we all know, is often extraordinarily and breathtakingly clever and ingenious –– one can only reverently take one’s hat off to it all, in respectful amazement, sometimes. But . . . it does not constitute fact, and cannot substitute for it.[5]

Kitchen is not alone in his objections to the DH. Past scholars such as Umberto Cassuto and R. Norman Whybray have also articulated objections to the conventional version of DH, including many of its founding assumptions and arguments.[6] Three Latter-day Saint scholars and BYU professors, Richard Neitzel Holzapfel, Dana M. Pike, and David Rolph Seely, have likewise summarized other objections to the DH in their 2009 volume on the Old Testament.

The Documentary Hypothesis has multiple challenges, including the dubious nature of some of its basic assumptions, the ongoing revisions scholars have made to it over the past century, and the lack of a close parallel to the hypothesized phenomenon of redacting such differing genres of the texts. The ever-increasing corpus of ancient Near Eastern texts has encouraged scholars to be more sensitive to ancient literary features, such as repetition, that are sometimes quite different from “Western” styles. And religious practices once thought to be “late” have now been discovered in second millennium Near Eastern texts, encouraging some scholars to express more confidence in the biblical text and its claims.[7]

That being said, Holzapfel, Pike, and Seely acknowledge that “despite serious challenges in the past four decades, no single scholarly approach to the origins of the Pentateuch has arisen to replace the Documentary Hypothesis.”[8] (What’s more, as Bokovoy has noted over on his blog, it is also fallacious to assume that the DH is somehow “dead” in current academic discussion.) All things considered, these scholars therefore propose that, given the evidence from the text of the Pentateuch and analogs in other books of LDS scripture (see above), “instead of being written by Moses,” the Pentateuch, particularly Exodus through Deuteronomy, “[is] more plausibly understood as compilations about Moses and his prophetic ministry.”[9]

So this is where I currently stand on the issue. While I think the DH has a lot going for it and that the conclusion that the Pentateuch, to some extent, is the product of documentary compilation is unavoidable, I also think there have been sufficiently reasonable objections to the DH for me to be cautious in how much of it I accept. I also freely admit that my Latter-day Saint paradigm, which accepts the basic historicity of the Book of Mormon and the Book of Abraham, has likewise influenced how I’ve approached the DH. All things considered, then, while I find the DH important to discuss and explore, and while I don’t think the DH should be ignored or rejected out of hand, I do not believe, from my LDS perspective, that it is the final arbiter in assessing the authorship of the Pentateuch, let alone deciding the historicity of the Book of Mormon or the Book of Abraham. I would, therefore, put myself down as a 3 or a 4 (probably more 4 than 3) on Barney’s scale.

Ultimately, whatever one believes about the DH and the composition of the Pentateuch, I hope that one will at least be openminded and considerate of other possible explanations or positions. (That goes for both sides of the debate.) In the end, what we need in this matter is not dogma or fundamentalism (and make no mistake that some secular scholars are just as dogmatic and fundamentalist in their support of the DH as some believers are against it), but good critical thinking and sensitivity to this complex question.

[6]: Umberto Cassuto, The Documentary Hypothesis and the Composition of the Pentateuch, trans. Israel Abrahams, 3rd. ed. (New York, N. Y.: Shalem Press, 2011); R. Norman Whybray, The Making of the Pentateuch: A Methodological Study (Edinburgh: T&T Clark, 1987). See also some of the comments of Ernst Nicholson, The Pentateuch in the Twentieth Century: The Legacy of Julius Wellhausen (Oxford: Clarendon Press, 1998), esp. 95–131. It should be noted that neither Whybray nor Nicholson reject the DH in its entirety, but rather critique aspects of the conventional theory and discuss possible counter-explanations.