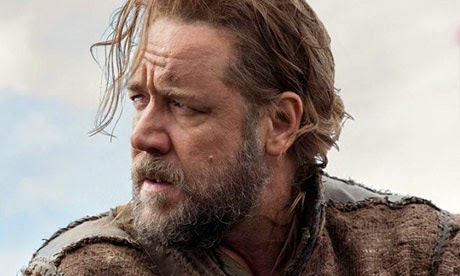 “That was one of the worst movies I’ve ever seen.”

“Yeah, it was absolutely horrendous.”

That’s what I heard from a sweet elderly couple as I left the movie theater in Idaho Falls, Idaho after watching Darren Aronofsky’s new film Noah. Given how much the film ventures from the biblical text, which is actually pretty concise and sparse on details (for example, go re-read the Genesis account and count how many lines of speech Noah gets in the entire story), it’s understandable that more conservative audiences would react negatively to Aronofsky’s retelling of the classic Noah tale.

Notwithstanding, I absolutely loved the film. Here are some of the reasons why.

1. The film had many nods to Jewish apocryphal and pseudepigraphal accounts of Noah and the Primeval history. “Aronofsky and Handel relied heavily on not just the text of the Bible (where the story of Noah encompasses roughly four chapters of the book of Genesis), but also Jewish Midrash, ancient explications of religious texts” (Source). For instance, in the film Noah takes glowing stones with him into the ark to provide light, a detail absent in the Genesis account but found in some Jewish apocryphal interpolations on this pericope (cf. Ether 3).

2. The creation sequence in the middle of the film was awesome. “The film also contains a depiction of the Big Bang (something doubted by 51 percent of Americans, according to a recent survey), fins-to-limbs evolution, and the very clear implication that the biblical ‘days’ of the creation were only metaphorical days, not literal, 24-hour ones.” (Source) Besides the stunning visuals of this sequence, given that I accept all three of these (Big Bang, evolution, and the “days” in Genesis being metaphorical), I had no problem with this aspect of the film. In fact, I found the cosmology in Noah remarkably similar to Mormon cosmology. Except for the seeming portrayal of creation ex nihilo, the cosmology of the film, such as the idea of Adam and Eve being plopped down into an already existing ecosystem having undergone stages of development and evolution, has been touched on by guys like (who else?) Hugh Nibley. Even Bruce R. McConkie, a staunch anti-evolutionist himself, once remarked, “But first, what is a day? It is a specified time period; it is an age, an eon, a division of eternity; it is the time between two identifiable events. And each day, of whatever length, has the duration needed for its purposes.” (Source)

I also liked the fact that Noah’s character tells the creation to his family as a story or myth, not as some kind of scientific excursus. I liked this since this is how I’ve understood the creation accounts in the scriptures. They’re myths, being told to provide meaning and orientation to God’s children in mortality. This doesn’t, I hasten to add, mean I think these accounts are “false” or “untrue.” (I reject the dichotomy between “myth” and “truth,” and am convinced that myth is actually a powerful way of conveying truth. As the critic Bruce W. Young has commented, “Far from being false stories, myths . . . are the most true stories, stories about the most crucial and fundamental of realities. . . . They thus give meaning to the world, to human life, and to things in the world.”[1]) Rather, it means that they’re attempting to achieve something different than what a scientific cosmology attempts to achieve: imparting metaphysical truths about the Plan of Salvation and our role in it. The authors of the scriptural creation accounts used the mythical language and imagery of their culture and time to convey these truths, and our role as modern readers of these ancient scriptural accounts is, by study and by the spirit, to get at the core of truth being convey by these myths. Perhaps Elder James E. Talmage said it best.

Let us not try to wrest the scriptures in an attempt to explain away what we can not explain. The opening chapters of Genesis, and scriptures related thereto, were never intended as a text-book of geology, archaeology, earth-science or man-science. . . . We do not show reverence for the scriptures when we misapply them through faulty interpretation. (Quoted here)

3. The environmentalist message of the film is very Nibleyesque.

Aronofsky has called Noah the “first environmentalist.” The film goes further: It actively interprets the Bible in favor of those who argue that the book of Genesis requires us all to be good “stewards” of the creation—and in strong opposition to those who read its language about mankind having “dominion…over all the earth, and over every creeping thing” as mainly implying that all this exists for us. . . . Noah tells us, bluntly, that that’s what the bad guys think. Those bad guys in the film are led by a figure named Tubal-Cain (Ray Winstone), who very early on declares, “Damned if I don’t take what I want.” Tubal-Cain represents the line of Cain (Adam’s son, who killed his brother Abel) and thus embodies the biblical “wickedness” of mankind just before the Flood; in the film, that wickedness is embodied, in Tolkienlike fashion, as industrialization, environmental despoilment, and pollution. And most of all, the killing and eating of animals: We see Tubal-Cain and his followers do this repeatedly throughout the film. (Source)

Compare this to what Nibley has said about the Book of Moses and environmentalism in such essays as “Man’s Dominion, or Subduing the Earth,” and “Brigham Young on the Environment.”

Ever since the days of the Prophet Joseph, presidents of the Church have appealed to the Saints to be magnanimous and forbearing toward all of God’s creatures. But in the great West where everything was up for grabs it was more than human nature could endure to be left out of the great grabbing game, especially when one happened to get there first, as the Mormons often did. . . . Man’s dominion is a call to service, not a license to exterminate. It is precisely because men now prey upon each other and shed the blood and waste the flesh of other creatures without need that “the world lieth in sin.” (D&C 49:19–21.) Such, at least, is the teaching of the ancient Jews and of modern revelation. (Source)

Brigham Young is one of the few men in history who could claim the privilege of personally occupying, settling, and placing the stamp of his own personality on a large part of the earth’s surface. He founded a hundred communities over hundreds of thousands of square miles of the continent; and after over a century they are still in existence, some of them, in those places where the bulldozer and chain saw have not yet completed their devastation, still bearing visibly the marks of his genius. For Brigham was keenly aware of his unique opportunity to lay the foundations of a new civilization and of the awful responsibility that weighed upon anyone who presumed to alter the face of nature and create an environment in which generations yet unborn would be obliged to live. . . . It is not too late to heed this wisest of counselors: “Let me love the world as He loves it, to make it beautiful, and glorify the name of my Father in heaven. It does not matter whether I or anybody else owns it, if we only work to beautify it and make it glorious, it is all right.” (Source)

4. The film is very spiritual, but also thoughtful. It explored such fundamental religious themes as agency vs. determinism, faith vs. doubt, sin vs. righteousness, knowledge vs. ignorance, obedience vs. dissent, fundamentalism vs. pluralism, etc. I was spiritually edified, as well as intellectually challenged, by the nuanced way in which Aronofsky presented and explored these issues.

So there are just some of the reasons I enjoyed the film. As an ancient Near Eastern studies major who has studied the Bible and enjoys exploring how other people interpret the biblical text, as a Mormon who found many convergences with my personal faith, and as a cinephile who enjoys a good film, I thought the movie was excellent. I’d highly recommend it!

One last thing. For any Mormon who might be put off by Aronofsky’s adaptation or re-visioning of the Genesis account (including his insertion of new dialogue, new themes, new characters, and new details that augment and expand on the biblical text), may I remind you that Joseph Smith did the exact same thing in the 1830s. If we indeed, as Latter-day Saints, seek after “anything virtuous, lovely, or of good report or praiseworthy” (Article of Faith 13), then what’s wrong with seeking truth, beauty, and meaning in a semi-secular Jew’s meditation on the story of Noah?

If the infidel has got truth it belongs to “Mormonism.” The truth and sound doctrine possessed by the sectarian world, and they have a great deal, all belong to this Church. As for their morality, many of them are, morally, just as good as we are. All that is good, lovely, and praiseworthy belongs to this Church and Kingdom. “Mormonism” includes all truth. There is no truth but what belongs to the Gospel. (Brigham Young, Discourses of Brigham Young, p. 11)

[P. S., here is a review of the film written by the LDS author Jeffrey M. Bradshaw that readers might find interesting.]