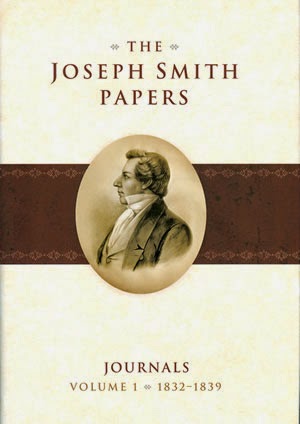 I continued to be very impressed with the work being undertaken by the Joseph Smith Papers Project. In case you haven’t had a chance to, I’d recommend that you be sure to check out the introductory material in volumes 1 and 2 of the Journals series. Here are some of the things you’ll read about.

In their search for contact with the divine, the Smiths were susceptible to the folk magic still flourishing in rural America in the early nineteenth century. Harboring the perpetual hope of the poor for quick riches, Joseph Smith Sr. searched for lost treasure, often with the help of Joseph Jr. Like many of their neighbors, the family combined the use of divining rods and seer stones with conventional forms of Christian worship. In his early twenties, Joseph Jr. had to extricate himself from the local band of treasure seekers before he could focus on his calling to translate the Book of Mormon. (1:xix)

At times revelation became a burden as well as a blessing, at no time more than when plural marriage was revealed. Plural marriage was the final component of the logic of restoration. Smith had prayed for an understanding of Old Testament polygamy and was commanded to do the “works of Abraham.” Although he hated adultery and was deeply loyal to his wife Emma, he believed he was to take additional wives as had the ancient patriarchs. He went about it carefully, one woman at a time, usually approaching her relatives first and going through a prescribed wedding ceremony. During his lifetime, he was married to approximately thirty women. Although conjugal relations were apparently involved, he spent little time with these women, the need for secrecy and the demands on his time keeping them apart. At first aghast at what her husband was doing, Emma eventually agreed to a few of the plural marriages but then pulled back. She oscillated between hesitant submission and outright opposition to the practice, but according to Maria Jane Johnston Woodward, who worked for a time as a servant in the Smith household, Emma told her, “The principle of plural marriage is right. . . . [I]t is from our Father in Heaven.” After her husband’s death, Emma refused to go west, where plural marriage would be practiced. She never admitted to her children that their father had been involved. (1:xxx-xxi)

By December 1842, the end of the first year covered in these journals, Joseph Smith had explained the doctrine of plural marriage to a few of his closest associates and was practicing it himself. Glimpses into the reasons for introducing the practice and his understanding of the doctrine behind it are provided in some of his translations and revelations. The Book of Mormon, for example, taught that monogamy was the rule but that it was permissible for one man to have multiple wives when God commanded. A revelation recorded 12 July 1843—the general outlines of which were reportedly understood much earlier—accordingly taught that Abraham, who was married to Sarah, was under no condemnation for taking Hagar as a second wife because the Lord had commanded him to do so. According to the revelation, other ancient prophets in addition to Abraham had the keys or authority from God to participate in or perform plural marriages, and those who received plural wives under the direction of these prophets stood blameless before God. The stipulation of prophetic direction meant that the practice was carefully controlled, however, and those who took plural wives on their own initiative faced serious consequences. Joseph Smith believed that this ancient authority had been conferred upon him as part of the latter-day restoration of the keys and power of the priesthood and that his authorization of plural marriages was justified before God. With these checks in place, a man might legitimately take plural wives “to multiply & replenish the earth, . . . & for thire exaltation in the eternal worlds,” while plural relationships that were undertaken without Joseph Smith’s direct approval were unauthorized and adulterous.

The nature of the extant sources precludes a thorough understanding of the extent to which Joseph Smith and others practiced plural marriage in Nauvoo and the nature of the relationships between the men and women in these marriages. Most of the information on the practice during this period comes either from later affidavits and reminiscences or from reports of disaffected members of the church at the time—none of which, for a variety of reasons, can be considered entirely reliable historical sources for delineating how plural marriage was understood and practiced by those involved at the time. William Clayton provides the best contemporaneous evidence that at least some plural marriages in Nauvoo during Joseph Smith’s lifetime involved conjugal relations—just as they did later in Utah—and nothing in the 12 July 1843 revelation on plural marriage provides any doctrinal reason for why any authorized plural marriage could not have included such relations. At the same time, there is insufficient evidence to conclude that all Nauvoo plural marriages or sealings were consummated. Although Joseph Smith had many children with Emma, no progeny from any of his plural marriages have been identified.

Given the sensitivity of the topic, it is no surprise that clear references to plural marriage are virtually absent from Joseph Smith’s Nauvoo journals. Some entries, however, may be best understood—or at least partially understood—in light of the practice, although a significant amount of ambiguity remains even after a careful examination of the context and supporting sources. For example, a revelation dated 2 December 1841 for Marinda Nancy Johnson Hyde (recorded in a 25 January 1842 entry of Smith’s journal) closes by counseling her to “hearken to the counsel of my servant Joseph in all things whatsoever he shall teach unto her, and it shall be a blessing upon her and upon her children after her.” Decades later, Hyde reported that this revelation had been delivered to her shortly after Joseph Smith had taught her the “doctrine of celestial marriage” and that she “followed the council of the prophet Joseph as above instructed” and continued to hope for “the fulfilment of the promises and blessings” contained in the revelation. In addition, a 1 May 1869 affidavit signed by Hyde attests that she was “married or sealed” to Joseph Smith in May 1843. Assuming Hyde’s memory accurately reflects events of 1841–1843 and that the “doctrine of celestial marriage” about which she learned included plural marriage, it would be reasonable to conclude that the revelation’s reference to “all things whatsoever” Smith would teach her included a marriage or sealing to the Mormon leader. But Joseph Smith could have counseled Hyde about many other issues in 1841 as well. Her husband, Orson Hyde of the Quorum of the Twelve, for example, had left on a mission to Europe and the Middle East in April 1840, leaving Hyde and her children to rely on others for much of their support until his return in December 1842.

Several later documents suggest that several women who were already married to other men were, like Marinda Hyde, married or sealed to Joseph Smith. Available evidence indicates that some of these apparent polygynous/polyandrous marriages took place during the years covered by this journal. At least three of the women reportedly involved in these marriages—Patty Bartlett Sessions, Ruth Vose Sayers, and Sylvia Porter Lyon—are mentioned in the journal, though in contexts very much removed from plural marriage. Even fewer sources are extant for these complex relationships than are available for Smith’s marriages to unmarried women, and Smith’s revelations are silent on them. Having surveyed the available sources, historian Richard L. Bushman concludes that these polyandrous marriages—and perhaps other plural marriages of Joseph Smith—were primarily a means of binding other families to his for the spiritual benefit and mutual salvation of all involved. (2:xxiv-xxvii)

4. Concerning the Mormon quest, beginning with Joseph Smith, to harmonize reason and revelation.

He was, moreover, no enemy of learning. An early revelation explained that “truth is knowledge of things as they are, and as they were, and as they are to come,” and his followers were urged to seek that kind of truth. They were to “obtain a knowledge of history, and of countries, and of kingdoms, of laws of God and man, and all this for the salvation of Zion.” A revelation commanded them to open a school, where, among other things, the students studied grammar as well as theology. In that same spirit, they established a school at which the students studied Hebrew under the tutelage of a Jewish instructor. “Teach one another,” they were enjoined, “words of wisdom; yea, seek ye out of the best books words of wisdom: seek learning even by study, and also by faith.” The Nauvoo City Council moved to establish a university soon after the charter was granted. Godly knowledge, to be sure, outranked secular learning in Smith’s thinking, but revelation was not set in opposition to reason. “The glory of God is intelligence,” one revelation declared, “or, in other words, light and truth.” Among his many superlative qualities, God was the most intelligent of all beings. Church members were told to seek knowledge as part of their salvation. “If a person gains more knowledge in this life through his diligence & obedience than another, he will have so much the advantage in the world to come.” Combining a set of apparently conflicting impulses, Smith left a complex legacy for his people. His revelations sustained a literal belief in scriptural inspiration yet promoted learning and knowledge as if religion and the Enlightenment were compatible. He never wavered in his belief that God had spoken to him but made it an article of faith to let all men “worship how, where, or what they may.” While reviving traditional Christian faith, he was equally a prophet of the coming age. (1:xxxiv-xxxv)

These are just some of the things that the Joseph Smith Papers are shedding further light on.

What an exciting time for those interested in Mormon history. I can’t wait for additional volumes of the Joseph Smith Papers to be printed!

1 thought on “From the Joseph Smith Papers”