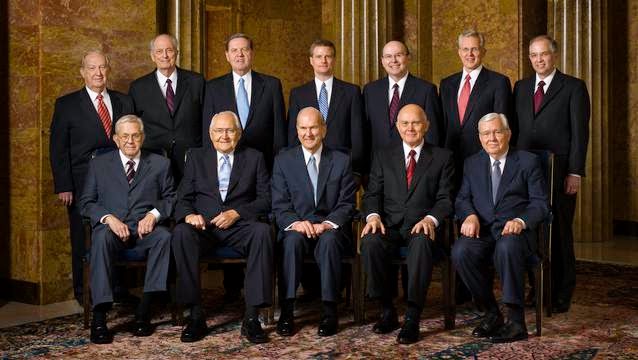 Readers of this blog will recall that I had some choice words for John Dehlin because of his continual claiming that President Monson suffers from dementia. In his recent interview with Kate Kelly, Dehlin once again made the claim that President Monson has dementia. At one point in his interview, Dehlin mentions that “[s]ome people are speculating that there’s a power vacuum in the Church right now.” (Given that Dehlin himself has speculated about a farfetched “power vacuum,” I find it more than a little disingenuous how he phrased this, as if it’s not he, but others, who are doing the speculating.) Kate Kelly wisely demurred (for the most part) from commenting about President Monson’s alleged mental health problems, but that didn’t stop Dehlin from pulling out all the stops.

I’ve probably talked to 50 people who work directly with the church in some significant capacity who all confirm that President Monson has some form of dementia and that unless he’s got handlers around him, and unless he’s reading a speech, he’s unmanageable and incoherent, and you know that doesn’t mean he can’t be friendly to a child and wink to a crowd or wiggle his ears or read a teleprompter, but in terms of really managing the church, he’s over 90. He’s past his capacity given dementia. Do you ever think about that stuff and that might might be why–you know if the prophet’s not speaking, it can’t be Boyd K. Packer that responds to you, but if the prophet’s not able to even think about it, let alone really respond to it, thus we don’t have statements from the Brethren, and thus we get statements from PR, and is it possible that it’s this power vacuum where someone like a Ballard or a Clayton might feel empowered to come after a you or a me, when otherwise a strong leader wouldn’t allow that?

This is a remarkably revealing comment from Dehlin. Let’s break it down.

“I’ve probably talked to 50 people who work directly with the church in some significant capacity who all confirm that President Monson has some form of dementia.”

For the first time we finally get some kind of indication from Dehlin where he is getting his information. According to Dehlin, it’s 50 people “who work directly with the church in some significant capacity” that have told him this. Immediately I can still think of problems with this, however. One of the commenters on the blog post, going by the alias Left Field, said it well.

If we can reliably trace this rumor back to an a [sic] known person who examined the patient and who is qualified to make a diagnosis, then I’ll pay more attention. Dehlin claims to know fifty people in the [Church Office Building] who confirm the rumors. There’s fifty people who have first-hand information and are willing to spill their guts to John Dehlin? Sounds more like fifty people willing to pass on the gossip *they* heard. I’d be more impressed if he knew one or two people and could explain the source of their knowledge. Sometimes gossip turns out to be true, but gossip is still gossip.

This is fundamentally my problem with Dehlin continuing to perpetuate these rumors about President Monson’s health. Even now, when he gives some kind of indication where he is getting his information from, Dehlin has done little more than confirm he didn’t hear it from President Monson’s neighbor’s dentist. But whom does Dehlin specifically have in mind when he says that people in the Church of “some significant capacity” have told him this? Apostles? Seventies? A receptionist who works in the Church Office Building? Who? The way Dehlin has worded this raises more questions than it answers. Until Dehlin is more specific about whom he has spoken with in the Church, we’re essentially back to square one.

Besides the not-so-subtle ageism in this comment, and besides the pesky fact that President Monson isn’t even 87 yet, what kind of possible meaningful criteria has Dehlin used to establish the validity of this observation, as if it were some kind of scientifically calibrated fact? (Hopefully he has something more robust than how he conducted those surveys on why people leave the Church, at least.) If he hasn’t, and he is just spouting an opinion, then why should we take Dehlin seriously at all? Any bloke can share an opinion about President Monson’s health or capacity to lead the Church, but what worth does it have for the subject under consideration?

But this next comment is the crown jewel of Dehlin’s entire statement, as it perfectly reveals with the utmost transparency what Dehlin’s game is. Remember in my last post when I summarized Dehlin’s likely point for bringing this topic up as basically being, “If President Monson was in his right mind, he’d agree with me [Dehlin]. Because he has dementia, there must be a power vacuum among the Brethren and one or more of them is out to get me, just like they did with the September Six! That’s the only possible explanation for why I am being summoned to a disciplinary hearing”? Keep this in mind as you read the following from Dehlin:

Do you [Kelly] ever think about that stuff and that might might be why–you know if the prophet’s not speaking, it can’t be Boyd K. Packer that responds to you, but if the prophet’s not able to even think about it, let alone really respond to it, thus we don’t have statements from the Brethren, and thus we get statements from PR, and is it possible that it’s this power vacuum where someone like a Ballard or a Clayton might feel empowered to come after a you or a me, when otherwise a strong leader wouldn’t allow that?

With this comment we can see exactly why Dehlin cares if President Monson has dementia. Let me explain. (We will ignore for a minute that the Brethren have come out with a statement about Kate Kelly’s quest to gain priesthood ordination for women.)

Anyone who has followed Dehlin’s work knows he has made it an imperative for his narrative and image that he comes across as the good guy, the guy who’s just out there to help, the guy who’s there to give you a shoulder to cry on, and, above all, the guy that Brother Bob or Sister Suzy from Typical Mormon Ward in Anywhere, Utah can trust with their faith and testimony when they encounter trouble. Anything, therefore, that could even potentially threaten this image that Dehlin has so carefully made for himself must either be suppressed (cf. Greg Smith’s paper) or spun to do damage control (cf. Dehlin’s claim that his pending disciplinary action is because he’s simply trying to help X marginalized group in the Church [e.g. people with questions, LGBT individuals, etc.])

With this comment we can see Dehlin conjuring yet another attempt to salvage the image he’s made for himself, as well as explain the disciplinary action incurred by his confederate Kate Kelly. (As if Kelly’s excommunication needed any more explaining than what was already laid out by her bishop.) What Dehlin has done is suggest that the “strong leaders” (President Monson, I suppose) in the Church are incapacitated (thanks to things like dementia), which has left a “power vacuum” in the Church. This has created opportunities for bullies like Elder Ballard and Elder Clayton to surreptitiously excommunicate Kate Kelly, or for the Public Affairs department to go rogue and release press statements without authorization condemning Ordain Women. Thus Dehlin and Kelly’s public image is saved. You see, it’s not their fault that they are facing Church discipline because of their apostate actions. It’s those old, white, male, cisgendered, heteronormative fogies in the Church Administration Building that are leading a witch hunt now that an incapacitated President Monson is out of the picture!

(Because remember, of course, that President Monson is famous for his advocating progressive ideals about sexuality and gender roles in the Church and society [to say nothing of his fondness for the work of revisionist historians at Signature Books who have systematically tried to undermine the very foundations of the Restoration]. If only he didn’t have dementia, I’m sure he would’ve stepped in by now to personally stop whatever conspiring apostles were trying to give Dehlin and Kelly the boot.)

In short, Dehlin simply cannot accept that his and Kelly’s apostate behavior is what’s responsible for the weight of Church discipline coming down on them, so he is attempting to manufacture a conspiracy in the hierarchy of the Church to explain all of this away and save face with the public.

If there is any other possible reading of these comments from Dehlin, I’m all ears.

Of course, Dehlin never outright claims this is the case, because he has no evidence for it. But he can play coy by throwing out claims of having sources of “some significant capacity” or cunningly word his accusation as a hypothetical question or scenario. (As if to say, “Don’t get mad at me! I’m just asking questions!”) And if nothing else, just the impression of nefarious things going on at 47 East South Temple can be enough to sway people to Dehlin’s narrative, which is all he needs.

Let these comments from Dehlin sink in, dear reader, and then ask yourself if these are the words of a man who genuinely sustains the Brethren or cares about the priesthood structure of the Church. For my part, so long as Dehlin keeps perpetuating this narrative, which he has manufactured from innuendo, question begging, hearsay, and cynically ascribing nefarious motives to the Brethren, I simply cannot take any of his feigned words of support for the Brethren or the Church, such as they are, seriously.

[N.B. For the record, I’m not disputing the possibility that President Monson has mental health issues. For all I know he does. What I am disputing are those who are using rumors and hearsay to perpetuate apostate narratives that undermine faith in the Brethren. It’s one thing to say, “President Monson has (or might have) mental health issues, so we should be caring and sensitive and pray for him and his family.” It’s quite another to say, “President Monson has dementia, which means there’s a power vacuum, which means the Brethren are stomping out dissent by unauthorized means, which means people like me (Dehlin, Kelly) are being persecuted by bullies like Packer or Oaks or Ballard. Oh, and make sure you keep repeating this on the Internet so everyone knows!”]