When Jeremy Runnells accused Brian C. Hales of being an “amateur,” he assured me that “[t]he real scholars in the field of polygamy have issues with many of Hales’ conclusions and interpretations.”

I asked Runnels who exactly these “real scholars” were, and also specifically asked where they had published their rebuttals of Brian’s work. Remember, before releasing his three-volume series Joseph Smith’s Polygamy, Brian had published his research in such venues as the Journal of Mormon History and the Mormon Historical Studies journal, two of the premier peer-reviewed, academic journals on Mormon history.

My wait appears to be over, as Runnells has recently updated his website to include the following comments on Brian’s work.

1. A statement from Dan Vogel on the comments section of one of John Dehlin’s podcasts.

2. An unpublished paper written by D. Michael Quinn and delivered at the 2012 Mormon History Association. (Note: Brian has responded to this paper here.)

3. A statement by Richard Bushman on the dust jacket of Brian’s Joseph Smith’s Polygamy.

4. A statement by Todd M. Compton on the dust jacket of Brian’s Joseph Smith’s Polygamy.

5. A statement by Lawrence Foster on the dust jacket of Brian’s Joseph Smith’s Polygamy. 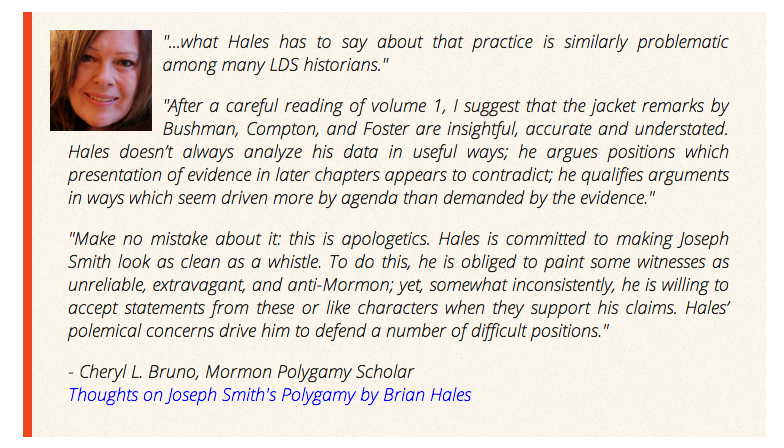 Mind you, this comes after Runnells’ statement that, “Brian heavily interprets the facts based on his biases. This is the key difference between apologists and scholars. This is why Brian C. Hales is not a scholar.” I am puzzled that Runnells is so naive to think that this is what separates the scholarly wheat from the apologetic tares (as if “scholars” are lifeless automatons without bias or assumptions that influence how they interpret data and evidence), and that he would try to use this tactic to discredit Brian, seeing as how it was Runnells himself who conceded, “I never claimed to be a scholar or expert or that my letter is an academic paper.” What should we call Runnells then, if not a scholar? An ex-Mormon apologist, perhaps?

But a bigger problem for Runnells, of course, is that none of these statements collected by him come from peer-reviewed sources. Remember, I specifically asked what published work had refuted Hales. The only one of these that could even begin to qualify would be Quinn’s paper, which was presented at an academic conference. But even then, Quinn’s paper (as far as I know) has not been published. So even it does not qualify.

Perhaps the most perplexing comment posted by Runnells, however, comes from “Mormon historian” Thomas Kimball.

Leaving aside his questionable assumptions about the achievability of impartiality or his bizarre claim that Brian lacks “specificity in his reporting,” I am assuming this is the same Thomas Kimball who is the “marketing director for Signature Books.” His bio on the Signature Books website mentions no academic training in history, nor does it mention any publications on Mormon history to his name. I am therefore genuinely curious to know why Runnells thinks Kimball qualifies to be bestowed the exalted title of “Mormon historian,” whereas Brian does not. Perhaps Kimball has some publications that I’m unaware of. Google only turned up a personal essay in Sunstone, but that was it. If so, I’d be happy to take a look at them. (I am also curious to know where exactly Kimball made this comment, since Runnells did not provide a source.)

And if Brian is an “amateur” for being an anesthesiologist and yet opining on Mormon history, then what are we to make of “marketing director” Kimball? It seems abundantly clear to me that Runnells is simply playing a game of “people I agree with are ‘scholars,’ but people I disagree with are ‘amateurs’.” It’s a fun game to play, to be sure, but not very helpful in the long run. It also shows that Runnells seems perfectly fine with employing a double standard when it suits his anti-Mormon purposes.

In addition, Runnells has also misrepresented Bushman, Compton, and Foster. Since Runnells and his likeminded chums on the Internet seem to love using graphics to illustrate their point, below is a graphic comparison of the excerpted quotes produced by Runnells and the originals as they appear on the back of Brian’s book. (You can also find these images on the FairMormon wiki.)

Do you notice the distortion? Runnells is guilty of quote mining. He has selectively chosen only those parts of these quotes that indicate some kind of disagreement with Brian. When read in their entirety, however, these quotes actually praise Brian for his scholarship! Bushman says that with Brian’s research “[t]here has never been a more thorough examination” of plural marriage. Compton calls Brian a “conservative Mormon scholar” (!) who has produced a “a landmark in the historiography of Mormon polygamy,” and admires “the depth of his research.” Foster, for his part, compliments Brian as “an exceptionally thorough, meticulous, and evenhanded researcher and assessor of Joseph Smith’s complex and controversial polygamous practices,” and praises his research as “path-breaking and indispensable.” And why did Runnells omit Danel Bachman’s comments? Maybe because Bachman said Brian’s research “will now be the standard against which all other treatments of this important subject [including Runnells’] will be measured.”

Remember that scholars will always have disagreements, especially over complex and controversial subjects like Joseph Smith’s plural marriage. That’s only to be expected. The historical sources on Joseph Smith’s polygamy are not so unambiguous or clearcut that scholars are just going to sit down an automatically agree on everything, and the boilerplate language of Bushman and others that not everyone may agree with Brian isn’t anything particularly radical or damning. Runnells’ attempt to exploit these quotes in such a pedantic manner, however, shows he is grasping at straws.

But the distortion and misrepresentation by Runnells does not end with the three scholars quoted on the dust jacket of Brian’s book. Here, for instance, is a part of Bruno’s blog post that Runnells conscientiously avoids reproducing in his attack on Brian.

Yet, despite the various difficulties Hales has with analysis and handling of evidence, this set is nevertheless a “must-have.” It is a significant milestone as one of the first rigorous historical treatments of Joseph Smith’s polygamy from an apologetic standpoint.  It is clearly the single greatest guide to available resources on the practice of polygamy in Joseph Smith’s Nauvoo. And, it will without any doubt shape the arguments regarding the centrality of plural marriage in early Mormon theology, as well as arguments on precisely what that plural marriage means historically and theologically for Latter-day Saints.

Upon reading the original post by Bruno, one will quickly notice that this statement rests snugly between the second and third paragraphs as quoted by Runnells. I wonder why Runnells decided to omit it. What’s more, why didn’t he at least bother to use ellipses to indicate he had omitted this text? Was he just lazy, did he not actually read the original source, or did he purposefully not want his readers to know there was something missing, lest they go look it up for themselves?

But Bruno has more to say about Brian’s work.

In future writing and conversation on the subject of Joseph Smith’s polygamy, the issues that Hales has set forth will demand first attention. There is little doubt that Brian has done a substantial work in laying out the major topics and giving the pertinent documentation. From this base, others will be able to make their own interpretations.

Whether or not you are inclined to agree with his conclusions,  I encourage you to purchase these volumes and enter this discussion. Read the evidence and Brian’s analysis, and decide for yourself what theory best accounts for this fantastic presentation of the facts.

Bruno may be critical of some of Brian’s positions or arguments, but for some inexplicable reason I get the impression that she is nevertheless impressed with Brian’s work. Far from the impression given by Runnells’ cherry-picking, it is evident to me that Bruno has some very positive things to say about Brian’s research.

What have we learned from all of this? Above all, the conclusion is unavoidable that Runnells was either dishonest or irresponsible in how he represented at least four of these quotes.

Let me conclude this post with a couple of assessments and observations.

1. I have no doubt that Vogel, Compton, Quinn, and others who have expressed reservations with Brian’s analysis may have valid criticisms or points to consider. The data on Joseph Smith’s plural marriage is complex and highly ambiguous, and Brian certainly does not have the final say. That being said, it is downright ludicrous for Runnells to think that a few lines hastily scribbled off on the comments section of a website or the back of a dust jacket or some blog constitutes sufficient proof that Brian’s views on plural marriage have been refuted and can therefore so casually be brushed aside. The fact of the matter is that these commenters and others have at least found Brian’s work important enough to take time to engage it in some manner. (Quinn’s paper, and Brian’s response, shows the level of argumentation and discussion this topic can reach.) We might hope that Runnells would extend Brian the same courtesy, but given the zeal he has exhibited in his idealogical crusade to defame the Prophet Joseph Smith by any means necessary, I doubt he will.

2. Runnells, for all of his smoke and mirrors and rhetorical posturing, has yet to substantially refute Brian’s arguments. He has promised to respond to Brian’s “hit piece” on Rational Faiths, but even then I suspect what we will get from Runnells is the sort of flippant, casual dismissal that is characteristic of his treatment of other LDS scholars. (That is, when he even bothers to engage other LDS scholars.) But why should Runnells stop with Brian’s blog post? Why not demonstrate his prowess by systematically refuting the entirety of Brian’s corpus of research, if he can? Surely the man who spent the better part of a year using Google to cobble together his celebrated letter could make mincemeat of the five years-long intensive research of Brian and his assistant Don Bradley.

3. It is clear that Runnells either (A) doesn’t care about employing double standards, or (B) is oblivious to the fact that he’s employing double standards. For him to sneeringly dismiss Brian as an “amateur” and in the same breath hold up Thomas Kimball as some kind of authoritative “Mormon historian” is nothing more or less than a brazen double standard. If Runnells wants to be taken seriously at all, he needs to be consistent in how he classifies his “amateurs” and his “historians” and by what criteria.

4. Runnells’ flagrant misrepresentation of his sources indicates he either (A) did not read them carefully (if at all), or (B) was lazy, or dishonest, in his analysis. Either way, this does not speak well to Runnell’s analytical ability. If we can’t trust him to represent simple things (e.g. easily accessible quotations in English) correctly, then why should we trust him to represent complex things (e.g. Egyptian iconography or Mesoamerican archaeology) correctly?

Perhaps I’m just stating the obvious, but after all of this I remain profoundly skeptical (in fact highly dubious) of the propriety of Runnells’ methods, his presentation of the evidence, and his conclusions drawn therefrom.

4 thoughts on “The “Real Scholars” of Jeremy Runnells”