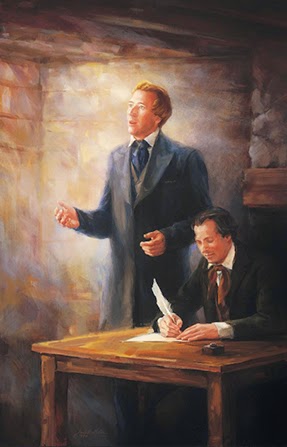 [This blog post was written by my good friend Brandon Habermeyer, a BYU graduate in philosophy and film studies. It has also been cross-posted at the FairMormon blog.]
I remember hearing a quote in my institute class from the late Hugh Nibley, who is reported to have said something along the lines of, “In order to be a good Latter-day Saint you need to have an infinite capacity for boredom.” This quote, I think, humorously holds some truth, but for certain reasons that I think it shouldn’t be true. Put differently, true, honest discipleship does not afford us the chance to ever get bored. And the reason for that, I believe, is found in the reflective margins of the ninth article of faith, which will be the basis of this post today.
“We believe all that God has revealed, all that He does now reveal, and we believe that He will yet reveal many great and important things pertaining to the Kingdom of God” (Article of Faith 9). For me this article of faith reveals one of the more fascinating paradoxes of Mormonism. We believe in continuing revelation. Because we believe in continuing revelation it seems that we cannot have a theology that is any more than provisional, or temporary, because to claim otherwise is to claim that we’ve reached a plateau, a conceptual end, a spiritual license to cease from asking, knocking, and seeking. To claim that our doctrine, in other words, is absolute and immune to change, has no need for further clarification and articulation, and represents the final, inalterable word of God seems to establish what in sectarian language we call a “creed.” And creeds, by their very nature, cannot be trumped by further light and knowledge. From the perspective of the Prophet Joseph Smith, creeds were not looked favorably upon. Joseph taught, “The creeds set up stakes and say, ‘Hitherto shalt thou come, and no further,’ which I cannot subscribe to.”[1] A few months before the Prophet had similarly expressed, “I want the liberty of believing as I please; it feels so good not to be trammeled.”[2]

Our founding prophet believed that creeds fixed limits on human ingenuity and closed the doors for truth and further light and knowledge to spring from any source, regardless the label. The astounding paradox here, however, is that even Joseph would soon come to learn that this sort of untrammeled, unbounded freedom that he wanted the Saints to experience and enjoy had to be regulated and ordered within a community of restraints, lest it spin wildly out of control. We can bring to mind here several examples from church history.
Take, for example, the extravagant behavior of people possessed by spirits at the camp meetings that Joseph attended. These were people who exhibited uncontrolled, pseudo-spiritual emotions, believing themselves in possession of divine revelation, yet were neither edifying nor enlightening to those participating.[3] Another example we can consider is Hiram Page, who, like Joseph, was also receiving revelations from a seer stone, yet, according the historical account, was receiving revelations that “were entirely at variance with the order of God’s house, as laid down in the New Testament, as well as in our late revelations.”[4]
Suddenly Joseph was faced with a very challenging question. He wanted at one point for everyone to voice scripture and see God. Though without procedures, without order, leadership or law, the question would remain how he could avoid the pitfalls of other charismatic religions that did not circumscribe boundaries for human expression. And would differences of opinions about what counts as divine revelation oblige him to then tolerate a diversity of views indefinitely? Well, according to Joseph the answer was no. There had to be a single spokesmen divinely appointed whose amplification of authority at the center would in turn amplify and energize the authority of the entire congregation.
And that is a wonderfully fascinating and unique paradox to consider, because while the structure of the church from an outsider’s perspective may look like tyranny or despotism, from an insider’s perspective it looks like ordered benevolence—the kind that means to empower each of us individually, as well as collectively. To get a taste for how rich this paradox is, consider a passage from Richard Bushman, a reputable and faithful church historian.

Revelation meant freedom to Joseph, freedom to expand his mind through time and space, seeking truth wherever it might be. But [Joseph also had] a desire for order [to] balance the freeing impulse. By licensing his followers to speak with the Holy Ghost, he risked having the whole movement spin out of control. Against the centrifugal force of individual revelation, Joseph continually organized and regulated. Though he was the chief visionary of the age, he showed little sympathy for the extravagant behavior of people possessed by spirits. He preferred edification and orderly worship to the uncontrolled emotions of the camp meeting…[This] balance between freedom and control makes it difficult to keep Mormonism in focus. Was it authoritarian or anarchic, disciplined or unbounded?[5]

That is a really good question because it addresses the tension of our want for an open canon, and by implication continued revelation, yet also our need for stakes, order and authority, all which can be seen in the Prophet, as he was often torn between the impulse to obliterate the creeds yet also sanction them within a legalistic vocabulary of authority, priesthood, laws, and ordinances. These outward manifestations, which are believed to be eternal and unchanging, are what give our religion its pulse, its structure, its feelings of safety and superiority, but they can also be great stumbling blocks for those who may have suffered abuse of authority in the setting of organized religion.
I would like to shift gears a bit and focus on the tension inherent in revealed religion and what it implies for how we as members of the church interpret revealed doctrine in the light of our continual need to clarify and expound what has already been given. And I would like to provide some suggestions on how we can be anxiously engaged in this latter-day work by performing what is probably the most oft repeated phrase in the New Testament; “to ask, knock, and seek” revelation for ourselves, as well as our families.
Towards the end of his life the Prophet lamented, “I have tried for a number of years to get the minds of the Saints prepared to receive the things of God, but we frequently see some of them . . . fly to pieces like glass as soon as anything comes that is contrary to their traditions.”[6] Something that really astounds me about this quote is to consider Joseph’s audience. He’s speaking specifically about members of the church who, because of their “traditions,” or perhaps rigid posture towards interpreting doctrine, immediately “fly to pieces like glass” whenever new revelation, new articulation, or new clarification is given to what has already been established. I think there’s some truth to that. I think sometimes we, as members of the Church, are perhaps too comfortable in our traditions. But we should be careful about unconsciously settling into inherited, even popular, traditions, at it was President Harold B. Lee who taught that one of the functions of the Church is “to comfort the afflicted and to afflict the comforted.”[7]
I’ve had friends of mine tell me that because we live in the “dispensation of the fullness of times,” and that because we belong to “the only true and living church upon the face of the whole earth” (D&C 1:30), that this must unequivocally mean that our quest for truth and understanding has come to an end. They’ve said things to me like, “We have it all right here in the standard works,” an attitude that seems to say: “A Quad! A Quad! We have got a Quad, and there cannot be any more Quad.” This is somewhat of an ironic attitude because, as Bushman points out, “The Book of Mormon . . . prepares the way for itself by ridiculing those who think the Bible is sufficient.”[8] But it also warns against anyone who restricts God in the present from speaking anywhere and anytime, even if His voice at times appears to go against the grain of rigid orthodoxy (2 Nephi 29).
Elder Neal A. Maxwell warned that “such members move out a few hundred yards from the entrance of the straight and narrow path . . . thinking, ‘Well, this is all there is to it’; and they end up living far below their possibilities.”[9] The belief that our search for truth can come to an end because we think we already possess all the truths pertinent to our salvation is, I believe, one of the more subtle attitudes that lulls us into the mistaken belief that “all is well in Zion.” It is to incorrectly believe: (1) that we already understand fully what has been given, and (2) that we need not educate ourselves beyond the standard works, despite the Lord’s mandate to “seek out the best books” and to “seek learning, even by study and also by faith” (D&C 88:70, 74, 77-80).
This pacified attitude has been rightfully called “the myth of the unruffled Mormon,” which Frances Menlove describes as follows:

This myth [of the unruffled Mormon is] simply the commonly held picture of the Mormon as a complete, integrated personality, untroubled by the doubts and uncertainties that plague the Protestant and oblivious to the painful searching and probing of the non-believer. The Mormon is taught from Primary on up that he, unlike his non-Mormon friends, knows with absolute certainty the answers to the [thorniest] problems of existence, that in fact his search has come to an end, and that his main task in life is to present these truths to others so that they too may end their quests.[10]

1 thought on ““We Believe All That God Has Revealed””