Jeremy Runnells has a bad habit of misquoting people. As I showed on my blog a little while ago, he misquoted the printed endorsements of Brian Hales’ three-volume Joseph Smith’s Polygamy, for example. Most recently, he has misquoted both a dead and a living Latter-day Saint apologist, namely, B. H. Roberts and Daniel C. Peterson.

Allow me to explain.

In his reply to Peterson’s 2014 FairMormon presentation “Some Reflections On That Letter To a CES Director,” Runnells begins his characteristically sarcastic and dismissive polemic with a complaint that Peterson is a nasty apologist (any surprise?) who resorts to such lowbrow tactics as calling ex-Mormons who disagree with him “zombies.” Runnells quotes Peterson as follows:

Notice how careful Runnells is to inform his readers that Peterson “compare[d] me and CES Letter supports . . . to zombies with no brains.”
Scandalous, right? Only a nasty apologist like Peterson would do such a thing.
Except, of course, Peterson wasn’t calling Runnells or anyone else a zombie. He was calling the arguments (in this case the Spalding theory) that are used by anti-Mormons like Vernal Holley zombies. “The idea is that these just keep coming back,” with the antecedent to “these” clearly being “the Solomon Spalding theory” mentioned right before. “I mean, you shoot them between the eyes and they don’t stop,” once again referring to the Spalding theory as the antecedent. This can also be ascertained by the relative pronoun “which” referring back to “the Solomon Spalding theory.”
I suspect why Jeremy might be confused. Peterson used a plural pronoun for a singular antecedent. We can forgive Peterson for his grammatical slip, as he was speaking somewhat extemporaneously. We cannot so easily forgive Runnells, however, since a quick look at Peterson’s past publications will show he has used this metaphor a number of times before, and in no instance did he ever compare the zombies with any people, but with the arguments they make.
From Peterson’s 2005 FairMormon address “Reflections on Secular Anti-Mormonism”:

I will, as advertised, reflect on “secular anti-Mormonism.” I’m grateful for the assignment because, frankly, anti-Mormonism of the evangelical kind has come, with a few exceptions, to bore me intensely. It’s not only that it tends to be repetitious and uninteresting–I think I’ve mentioned here before the film that my friend Bill Hamblin and I have laughed about doing: Bill and Dan’s Excellent Adventure in Anti-Mormon Zombie Hell. It’s not merely that the same arguments reappear ad nauseam, no matter how often they’ve been refuted, and that reviewing essentially the same book for the thirty-second time grows tiresome. (You’ve heard the definition of insanity as when you keep doing the same thing over and over and over again, and expect to get different results.) It’s also the deep streak of intellectual dishonesty that runs through much of the countercult industry, the triumphalism that exaggerates and even invents problems on the Mormon side while effectively pretending that no problems remain to be addressed on the so-called “Christian” side.

This was reprinted in the FARMS Review that same year as follows:

Anti-Mormonism of the evangelical kind has come, with a few exceptions, to bore me intensely. It is not only that it tends to be repetitious and uninteresting. (My friend and colleague William Hamblin and I have laughed about doing an autobiographical film entitled Bill and Dan’s Excellent Adventure in Anti-Mormon Zombie Hell.) It is not merely that the same arguments reappear ad nauseam, no matter how often they have been refuted, and that reviewing essentially the same book for the thirty-second time grows tiresome.

Here’s Peterson writing back in 1997:

I have joked about the film that my colleague William Hamblin and I want to produce: Bill and Dan’s Excellent Adventure in Anti-Mormon Zombie Hell. Like others who occasionally feel called upon to survey the dreary precincts of the fundamentalist anti-Mormon demimonde, we are growing tired of the tendency—very widespread among these crusading ministries and publications—endlessly to repeat arguments that have been answered years ago, to ignore counter evidence and opposing interpretations, to proceed in blissful and sometimes even defiant ignorance of crucial data.

Here is Peterson on his blog in 2012 once again clearly calling the theory the zombie, not the people making it. “Truly, the Spalding theory is very much like a zombie: Shoot it between the eyes and it just keeps on coming. Why? Because it has no brain.” Speaking of a recently published rebuttal to the Spalding theory, Peterson once again called the theory “zombie-like,” not its adherents. “A recent attempt to resuscitate the zombie-like Spalding Theory doesn’t fare too well, I’m afraid.”
Besides simply noticing the context of Peterson’s remarks in his FairMormon presentation, all Runnells needed to do was check out Peterson’s use of this metaphor in the past to clearly see he was not talking about any individual, but arguments like the Spadling theory that anti-Mormons keep making against the Church as being like brainless zombies.
Given how badly he misquoted Peterson (making a cute little meme of him running away from a horde of zombies to really drive the point home), it is fairly awkward that Runnells titled his reply “A Zombie’s Reflections on that Mormon Apologist’s Reflections,” as if to (presumably) deflect Peterson’s nasty jab at him by wearing the (misapplied) zombie label with pride!
At this point I don’t think I need to point out how badly this attempt at sarcasm has backfired on Runnells.
Runnells Misquotes B. H. Roberts
In response to Brian Hauglid’s blog post at Rational Faiths on the Book of Abraham, Runnells enlists Elder B. H. Roberts with a damning quote that sets the tone for Runnells’ attack on Hauglid.
Seems pretty bad, right?
Well, at this point you probably know where this is heading.
Leaving aside the fact that Runnells introduced a typo in his quotation, it turns out that Elder Roberts has been badly misquoted. If you follow the citation provided by Runnells, you’ll discover the context of Elder Roberts’ remark.

In 1912 a widespread interest was awakened in the Book of Abraham by the publication of a brochure, by Rt. Rev. F. S. Spalding, D. D. Episcopal Bishop of Utah, under the title Joseph Smith, Jun., as a Translator. The bishop submitted the facsimiles of some of the parchment pages from which the Book of Abraham had been translated, (copies of which accompany this chapter) to a number of the foremost of present day Egyptian scholars. . . . Speaking of the result obtained from the submission of these facsimiles to these foremost Egyptologists, Bishop Spalding says: “It will be seen that there is practically complete agreement as to the real meaning of the hieroglyphics, and that this meaning is altogether different from that of Joseph Smith’s translation.” (Joseph Smith, Jun., as a Translator, p. 19). He also says that “The opinions were obtained from the scholars themselves, and in no case did one man know the opinion of another” (Ibid). The seeming triumph of the bishop’s test of the “Mormon” Prophet’s ability to translate ancient languages correctly by inspiration from God, was much commented upon throughout the United States, and especially by the religious press; and the “collapse of Mormonism” was confidently looked for in some quarters; for if Joseph Smith’s translation of the Egyptian parchment could be discredited, and proven false, then doubt would be thrown also upon the genuineness of his translation of the Book of Mormon; and thus all his pretensions as a translator would be exposed and come to naught. “It is the belief,” wrote Bishop Spalding, “that the honest searchers for truth among the Latter-day Saints will welcome the opinions of authoritative scholars, and, if necessary, courageously readjust their system of belief, however radical a revolution of thought may be required, that the following judgments of the world’s greatest Egyptologists have been ascertained.” (Joseph Smith, Jun., as a Translator, p. 19).

Elder Roberts was paraphrasing the argument of Franklin Spalding, the anti-Mormon author/editor of the pamphlet referenced above, as well as the expectation of others that the Church would fall because of this new attack. He was not providing his own belief on the matter. In fact, Elder Roberts went on to say almost the exact opposite of what Runnells portrays him as intending.

Nothing of this kind happened however, “Mormonism” was not moved a peg by the critique. So far as known there were not a score of Latter-day Saints whose faith was affected by the Spalding brochure. There were no Egyptian scholars in the church of the Latter-day Saints who could make an effective answer to the conclusions of the eight scholars who in various ways pronounced against the correctness of Joseph Smith’s translation of the Egyptian parchments that so strangely fell into his hands; but a number of articles were written by elders of the church pointing out the bias of the scholars and some evident defects in the treatment of the subject; and also reviews of Bishop Spalding’s arguments.

So not only was Elder Roberts not concerned with these attacks, he also mentions material that he felt pointed out “evident defects in the treatment” of the Book of Abraham by Spalding. 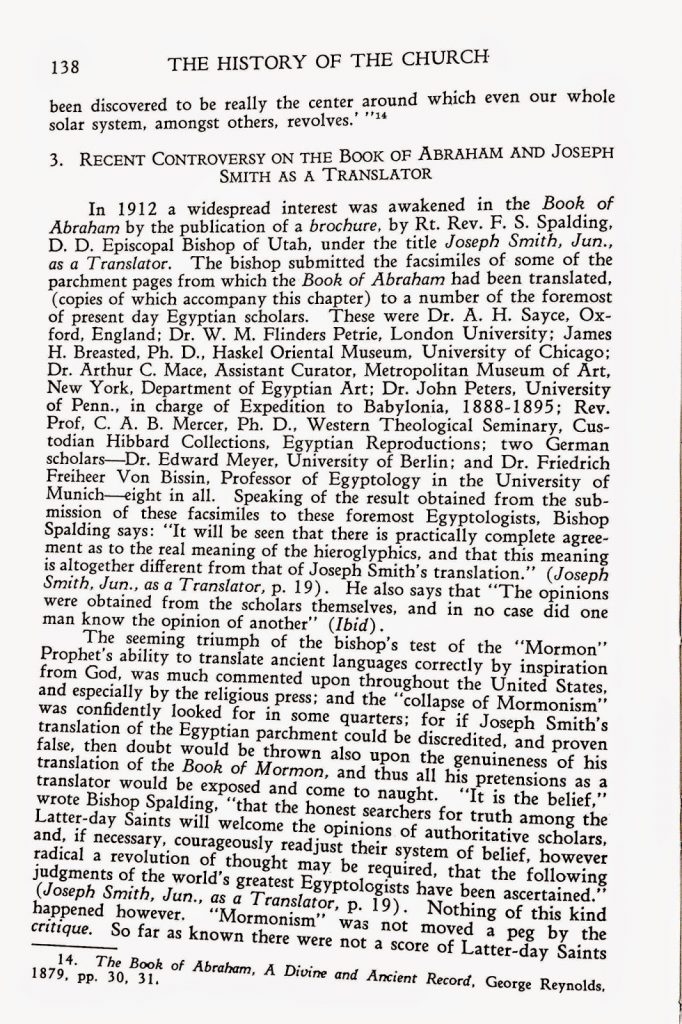 On a related note, it is interesting to observe that Runnells introduces Elder Roberts as “LDS historian, General Authority and scholar.” Elder Roberts was certainly all of these things, but notice what Runnells left out. He left out “foremost defender of Mormonism of the past century.” I can only presume that Runnells omitted the fact that Elder Roberts was a committed apologist for the Church because Runnells despises LDS apologists and wants to portray Elder Roberts as a “historian” and “scholar” who agrees with him. After all, only “historians” and “scholars” agree with Runnells, and the people who disagree with him are merely “apologists.” It’s a clever rhetorical trick, but not, ultimately, very persuasive.
At this point I’ve seen Runnells abuse enough of his sources that I cannot take any of his claims at face value. It would be one thing if Runnells was perhaps fudging on the wording of these sources, for example, but that he has misrepresented them so badly demonstrates a lack of rigor in his research and presentation.
To end on a note of irony, consider this comment at the beginning of Runnells’ response to Peterson.
These two misrepresentations from Runnells may or may not be “deliberate” (Runnells may simply have been terribly sloppy in his research, as I suspect he was), but they are blatant misrepresentations nonetheless.