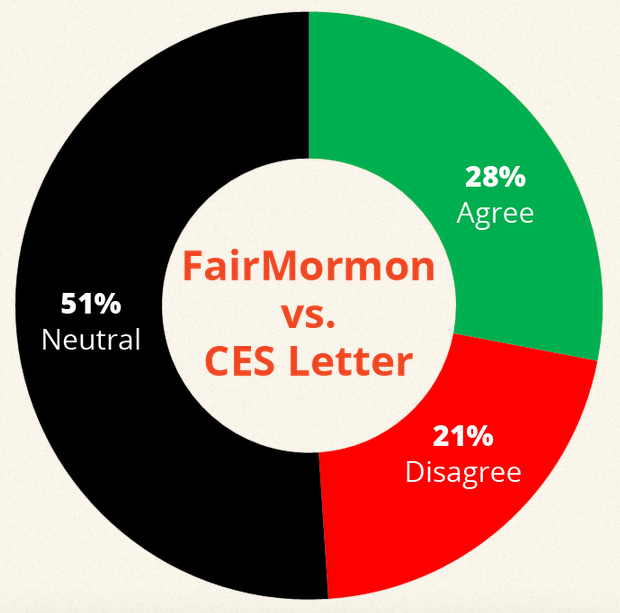 In his “Debunking FairMormon’s Debunking,” Jeremy Runnells provides a donut chart that shows FairMormon supposedly agreeing with 79% of his “Letter to a CES Director.”

This has turned into a popular meme with many ex-Mormons, who triumphantly proclaim that Runnells is so sharp that FairMormon has conceded to him on 79% of his claims. With such a damning statistic, Runnells’ supporters have crowed throughout the Internet that their patron saint has stopped those pathetic Mormon apologists dead in their tracks! Runnells’ letter is the long-awaited silver bullet that will finally take down Mormonism. After all, even the Church’s best and brightest at FairMormon could only refute 20% of Runnells’ claims!

First of all, let’s address Runnells’ assumption that FairMormon’s silence on a topic means it agrees with him. This is a common fallacy that essentially automatically assumes that in a debate silence equals consent. In fact, silence does not always equal consent or agreement. Basically, what Runnells has done is get trapped in Warnock’s dilemma.

The problem with no response is that there are five possible
interpretations:
1) The post is correct, well-written information that needs no
follow-up commentary.  There’s nothing more to say except “Yeah, what
he said.”
2) The post is complete and utter nonsense, and no one wants to waste
the energy or bandwidth to even point this out.
3) No one read the post, for whatever reason.
4) No one understood the post, but won’t ask for clarification, for
whatever reason.
5) No one cares about the post, for whatever reason.

Warnock’s dilemma can easily be applied to this situation. Runnells has simply assumed number 1 above. However, this assumption is unfounded. Besides the fact that Runnells offers no justification for this assumption, FairMormon has, it turns out, officially responded to this claim, making it very clear where it stands on this matter.

Jeremy Runnells has claimed that FairMormon has agreed with him on a large percentage of various claims he has made, even going so far as to claim agreement on items that FairMormon did not respond to. With regard to historical facts, Mr. Runnells’s citations are sometimes incorrect and his interpretations, even of correctly cited historical facts, are unwarranted. In short, FairMormon disagrees entirely with the conclusions reached by Jeremy Runnells.

Pretty straightforward, right? But why, then, has this ex-Mormon claim persisted despite the fact that FairMormon official disavows any such alleged agreement with Runnells, 79% or otherwise? If I had to wager, I’d bet it has something to do with the fact that FairMormon didn’t couch its response in the form of a snarky meme or cute little graphic. Since Runnells and many of his followers have the intellectual sophistication and maturity of a high school sophomore, it isn’t surprising that they’d miss something that wasn’t first created on memegenerator.net.

More to the point, I think I know why Runnells and his supporters are confused. You see, narrative history is more than simply collecting raw historical data and presenting it an organized fashion. This might describe documentary history, such as the work of the Joseph Smith Papers Project, but the kind of history that most people enjoy reading and debating about, and the kind of history Runnells (poorly) attempts to do in his anti-Mormon tract, is more involved than that. Writing in his introduction to Herodotus’ Histories, Donald Lateiner of Ohio Wesleyan University explains,

Every historian selects, omits, and organizes his or her data. It cannot be avoided. Every historian assesses the accuracy of what s/he hears and tries to present the accepted residue and explanations for it in a coherent, unified narrative. Every historian interprets that narrative by intrusive evaluations and hypothetical alternatives to what happened. Better historians “torture their evidence” (Thucydides’ vivid image) to produce a substantial package in a convincing and lucid manner.

But it’s actually deeper than that. Besides disagreeing with Runnells 100% on the conclusions he reaches, FairMormon is also critical of Runnells for his misuse of the historical sources. There are so many examples of this that I can only encourage readers to look for themselves at FairMormon’s wiki. Suffice it to say for now that Runnells’ problem runs deeper than merely constructing a faulty historical narrative.

As an aside, it is naïve in the extreme to suppose one can be completely “objective” in crafting historical narratives. As human beings we all have our own biases and ideological blinders that make any such “objectivity” (in the positivist sense of the word) in historiography next to impossible. We are also finite beings who are hampered by cultural and linguistic barriers that separate us from the objects of our study. This is explained well by Rick Duerden.

[The] combination of language and history complicates our notions of history just as it complicates our notions of language. Thus, because language is not a simple and transparent medium, our statements about the past are not clear windows on history, nor are they perfect mirrors, direct reflections of a past world; histories we write are constructs, shaped by what we take from old texts and by what we decide to put into the new texts we ourselves write. Histories are the way we choose to represent the past to ourselves. Like our own memories, they are not storehouses of objective fact, but the images and fictions which we choose to believe. We all color our memories somewhat; I select and retell to make the past explain the present, to make my memory justify my current consciousness. In the same way, the biases and ideology of the historian become part of the story. New historicism requires a fervent self-consciousness about our own commitments and prejudices. The critic is not outside history and language, calmly and objectively commenting; the critic too is located in history, in a culture, with an ideology that makes some things invisible, some things important.

As much as the Runnellites like to claim that they’re simply showing people the cold, hard facts about Joseph Smith’s fraud and amorality, they are, in fact, merely participating in a historiographical culture with a specific ideology that leads them to “represent the past to [themselves]” in such a way to reinforce their decision to stop believing in the claims of the Church. Now, to be fair, I readily acknowledge that I too participate in my own historiographical culture with its own ideological baggage. I claim no special powers of “objectivity” when it comes to analyzing Mormon history. However, I try to be as honest as I can when confronting issues in Church history that may conflict with my paradigm. I can also honestly say that I think the cynical, Joseph-Smith-as-a-huckster-and-immoral-fraud narrative perpetuated by Runnells is, at its core, bogus, and not sustained by the best critical reading of the historical evidence.
To bring this all home, when Runnells and his supporters claim that FairMormon agrees with him on 79% of the claims in the “Letter to a CES Director,” they are misleading others into thinking this implies agreement with his conclusions and the narrative he has created to present the historical data. I will charitably assume that this stems from ignorance, and not from any kind of malice. Be that as it may, it is simply irresponsible for Runnellites to claim that FairMormon whimperingly agrees with 79% of the “Letter to a CES Director.” This myth, while perhaps serviceable for sustaining ex-Mormon cognitive dissonance, should be exposed for what it is: a lazy attempt to score cheap rhetorical points and nothing more.