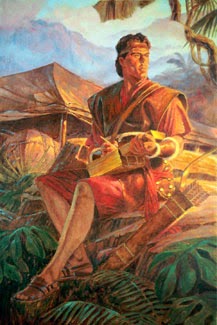 [Note: Be sure to check out my follow-up to this post here.]

David Bokovoy very recently has posted an article on the subject of historicity and scripture. If I understand his post correctly, Bokovoy approvingly cites Joseph Spencer and Adam Miller in support of the position that one can transcend debates about “historicity” when it comes to matters of scripture, since scripture pertains to eternal truths that are above mere questions of the historical past.

Bill Hamblin has already posted the first of what appears to be a future series of questions for Bokovoy on this matter. Hamblin asks:

Does historicity ever matter in scripture?  Is it important that there be some ontological connection between religious claims and reality.  More specifically, does the historicity of Jesus matter?  Are the gospels just as meaningful and important if Jesus didn’t exist (as the Jesus-myth crowd believes)?  Or, if Jesus did exist, does it matter if he really rose from the dead, or if his disciples were just hallucinating?

I myself have weighed in on this matter, specifically with regards to what I call the imperative for a historical Book of Mormon. If you want to know my position on this topic, at least as it applies to the Book of Mormon, I would refer you to my paper.

For the record, lest there is any possible misunderstanding:

1. I do not believe the necessity for the Book of Mormon’s historicity is the same as any necessity for inerrancy. I am not a fundamentalist, and I reject scriptural inerrancy and infallibility for any work in the canon. I wholeheartedly agree with Brother Brigham on this point.

I do not even believe that there is a single revelation, among the many God has given to the Church, that is perfect in its fulness. The revelations of God contain correct doctrine and principle, so far as they go; but it is impossible for the poor, weak, low, grovelling, sinful inhabitants of the earth to receive a revelation from the Almighty in all its perfections. He has to speak to us in a manner to meet the extent of our capacities. (“The Kingdom Of God,” [8 July 1855] Journal of Discourses 2:314)

2. I agree in essence with what Bokovoy said in the beginning of his post.

Biblical authors were not historians, at least not in the modern sense of the term. They were storytellers. Their accounts were certainly sacred, but they were also entertaining, and sometimes even political and crude. Biblical stories tell us something about the way their respective authors understood the past, but they don’t always tell us something about “the” past. The original authors who produced the Bible created stories about prophets, kings, and heroic warriors that were carefully crafted to teach valuable ideas concerning divinity and its relationship to humanity, especially the family of Israel.

I believe this is equally the case with the Book of Mormon. As such, I do not equate the Book of Mormon’s historicity with its absolute “literalness.” While I accept the basic historicity of the Book of Mormon (i.e. the historical reality of the Lehite, Mulekite, and Jaredite migrations, the appearance of a resurrected Jesus to the Nephites, Moroni depositing the plates in upstate New York, etc.), I am totally comfortable with embellishments, narrative liberties, redactions, literary crafting, etc., in the text by the authors. In fact, I would be surprised if this didn’t happen in the text. I therefore do not believe that the historicity the scriptures and the literary crafting of the scriptures are mutually exclusive, much less with the Nephite scriptural record.

3. Although I strongly disagree with attempts to turn the Book of Mormon into inspired fiction, and have yet to encounter a coherent explanation for the Inspired Fiction Theory, I do not question the sincerity or faithfulness of individual members of the Church who may subscribe to said theory. I only question their attempts to reconcile such a belief with the foundational claims of the Church, as well as their reasons for subscribing to such a theory.

I hope this clears things up as to my position. I look forward to any future exchanges between Bokovoy and Hamblin on this topic.

2 thoughts on “Historicity and Scripture Revisited”