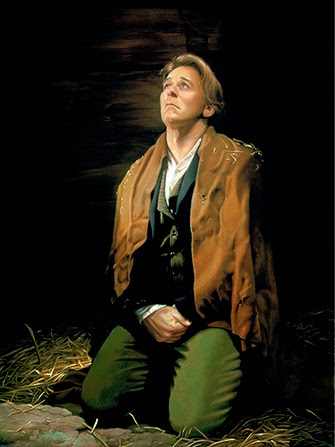 FacebookTwitterGoogleRedditSubscribe
I have problems with people casually throwing out accusations of “unrighteous dominion” at Kate Kelly’s and John Dehlin’s priesthood leaders. The phrase, of course, comes from Doctrine and Covenants 121.

We have learned by sad experience that it is the nature and disposition of almost all men, as soon as they get a little authority, as they suppose, they will immediately begin to exercise unrighteous dominion. (D&C 121:39)

If we look at D&C 121 in its historical context, I believe we see that Joseph Smith had some very specific things and circumstances (and even people) in mind when he warned against priesthood holders exercising “unrighteous dominion.”
For starters, we need to understand that this section of the D&C comes from the middle of Joseph’s lengthly letter to the Church (through bishop Edward Partridge) dated March 20, 1839. (You can read the letter at the Joseph Smith Papers here.) In this letter, Joseph, among other things, decries the deplorable conditions he and the Saints were in at this time. Historian Steven C. Harper describes these conditions and the actions of some of Joseph Smith’s most trusted brethren that landed him there.

In a cramped and filthy dungeon room without beds, bathrooms, warmth, or adequate food, Joseph passed his darkest days. He was awaiting trial for a capital offense without hope for due process of law as his wife, children, and beloved followers were robbed of their property, stripped of their civil liberties, and driven midwinter by a mob acting under the guise of official orders from the governor, aided and abetted by a host of apostates. Indeed, many of Joseph’s most trusted and stalwart brethren had forsaken him. (Making Sense of the Doctrine and Covenants: A Guides Tour Through Modern Revelation [Salt Lake City: Deseret Book, 2008], 447.)

Who were these apostates that, through their betrayal of the Prophet, landed him in Liberty Jail? They included former apostles Thomas B. Marsh, Orson Hyde, and William E. McClellin, as well as others, such as Sampson Avard (the founder of the infamous Danite band) and William W. Phelps. Each of these men held prominent positions in the Church either locally–––such as Avard, a member of the Far West high council–––or in the upper hierarchy, and each of them in some way contributed to Joseph ending up in jail.
It was these circumstances and the actions by these once-faithful leaders that Joseph was almost certainly responding to when he spoke of “unrighteous dominion” being a threat to the stability of the Church and its members. He was, I am convinced, reacting to and warning against the kind of things these dissidents had done to cause Joseph and the Church major grief in Missouri. (There are plenty of handy monographs I can recommend, such as Alexander L. Baugh’s fantastic volume A Call to Arms: The Mormon Defense of Northern Missouri [BYU Press, 2000] or Leland H. Gentry’s Fire and Sword [reprint; Greg Kofford, 2009] that more throughly document what these dissidents had done to cause problems.) Joseph even names Avard specifically in his letter as one who had caused the Saints many “sufferings” because of his “wickedness,” so it seems to me that this stuff was on his mind as he wrote.
As such, “unrighteous dominion” isn’t just whenever a priesthood leader does something you don’t agree with. It’s when a priesthood leader in the Church attempts to use his position for self-aggrandizement, puffing up his pride, bolstering his control, or exploiting others. Fundamentally, it comes down to betraying the duties of the priesthood, especially when things get tough, or to secure the praise of the world. Joseph says just as much in his letter. “Behold, there are many called, but few are chosen. And why are they not chosen? Because their hearts are set so much upon the things of this world, and aspire to the honors of men” (D&C 121:34–35). Here is Harper once again, who summarizes this well.

“[Those who commit ‘unrighteous dominion’] cannot have power in the priesthood if they cover their sins, gratify pride, have vain ambition, or exploit the weak and the impoverished,” which sins these dissidents Joseph was responding to had committed. (Making Sense of the Doctrine and Covenants, 450.)

Notice too that “unrighteous dominion” comes at the end of a list of highly unflattering and sinful behavior that should never be exhibited by a priesthood holder. “[W]hen we undertake to cover our sins, or to gratify our pride, our vain ambition, or to exercise control or dominion or compulsion upon the souls of the children of men, in any degree of unrighteousness,” that, Joseph says, is when “the heavens withdraw themselves; the Spirit of the Lord is grieved; and when it is withdrawn, Amen to the priesthood or the authority of that man” (D&C 121:37).
So here is my question for anyone who wants to accuse Kate Kelly’s or John Dehlin’s priesthood leaders of “unrighteous dominion,” or of otherwise having had their priesthood authority “withdrawn” because of their alleged participation in such. What, exactly, have they done that remotely qualifies as anything listed above? Remember, Joseph was responding to very specific problems facing the leadership of the Church in Missouri in 1838–39. He was responding to these very things being done by even some of his most trusted brethren. How, then, exactly have Kelly’s or Dehlin’s leaders: (A) set their hearts “upon the things of this world”; (B) “aspire[d] to the honors of men”; (C) “undertake[n] to cover [their] sins”; (D) “gratif[ied] [their] pride”; or (E) attempted to “exercise control or dominion or compulsion upon the souls of the children of men”?
I don’t want generalities here. I want specifics. What specific actions have Kelly’s or Dehlin’s leaders undertaken that qualify as “unrighteous dominion,” given the conjoining behaviors attending such laid out by D&C 121? The revelation is very specific in naming what kind of behavior qualifies a priesthood holder to lose his authority and power because of “unrighteous dominion.” I’m sorry, but simply excommunicating someone isn’t enough. It is the prerogative of bishops and stake presidents, as judges in Israel, to employ such measures when they feel it necessary (and after having undertaken the proper protocol). If, say, it could be shown that Kelly’s or Dehlin’s leaders excommunicated them out of spite, hatred, or jealously, or to cover up their own sins and transgressions, then you might have something. Until then, any accusation of “unrighteous dominion” against them is simply ludicrous.
In fact, I’d challenge anyone reading this to go look at Bishop Harrison’s letter to Kelly or President King’s letter to Dehlin and show me where their tone, attitude, or demeanor in any way reflect these characteristics above.
I am perfectly satisfied that Bishop Harrison and President King have in no way exercised “unrighteous dominion” upon Kate Kelly or John Dehlin. I am likewise perfectly satisfied that any accusation of such leveled against Harrison and King by Kelly’s or Dehlin’s apologists is little more than empty rhetoric that both fundamentally misunderstands what D&C 121 has to say about “unrighteous dominion” and is meant to unduly inflame the public’s passions against these brethren.
Finally, I want to end by drawing attention to verses 16–17 in D&C 121.

Cursed are all those that shall lift up the heel against mine anointed, saith the Lord, and cry they have sinned when they have not sinned before me, saith the Lord, but have done that which was meet in mine eyes, and which I commanded them. But those who cry transgression do it because they are the servants of sin, and are the children of disobedience themselves.

Let this be a warning against those who would so casually toss around accusations of “unrighteous dominion” against any of the Lord’s anointed, including Kate Kelly’s or John Dehlin’s priesthood leaders.

1 thought on “On “Unrighteous Dominion””