As announced in various news outlets (here, here, and here) John Dehlin has been excommunicated from The Church of Jesus Christ of Latter-day Saints.

Below is the letter (taken from here; see also here) sent by President Bryan King to Dehlin, dated February 9, 2015. This letter details exactly why Dehlin has been excommunicated. 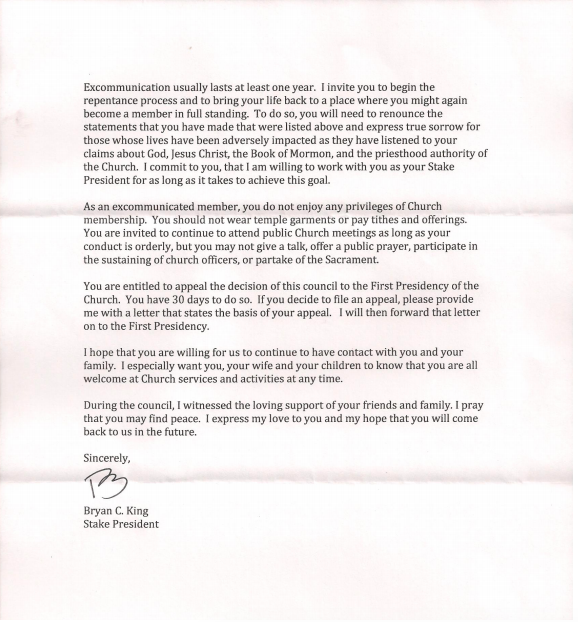 Note the specific reasons why Dehlin was excommunicated:
1. “Your teachings disputing the nature of our Heavenly Father and the divinity of Jesus Christ.”
2. “Your statements that the Book of Mormon and the Book of Abraham are fraudulent and works of fiction.”
3. “Your statements and teachings that reject The Church of Jesus Christ of Latter-day Saints as being the true Church with power and authority from God.”
Do you see any mention of supporting LGBT rights or Ordain Women?
Make sure you read the entire letter. It is very clear, precise, and reasonable.
This, of course, won’t stop Dehlin and his supporters from obfuscating and perpetuating the narrative that Dehlin is being punished for having questions, and that he is an LGBT/Ordain Women martyr.
This letter represents, in the mind of the Church, why Dehlin is being excommunicated, to wit:

[Y]ou do not have the right to remain a member of the Church in good standing while openly and publicly trying to convince others that Church teachings are in error.

The Church has responded to Dehlin’s excommunication here. Also, be sure to read the piece by MormonVoices here.