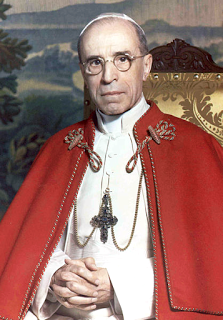 I recently celebrated my birthday. (Being single at 25, I believe I am now officially a “menace to society.”) Per my usual habit whenever I get gift money, I bought myself some books off of my Amazon wish list. One of the books I purchased is Lawrence Boadt’s Reading the Old Testament: An Introduction (2nd ed.). Boadt, who was Catholic priest (C.S.P.) by vocation before his passing in 2010, approaches the Old Testament from an explicitly Catholic perspective. It was therefore not surprising when I encountered the approving citation of Pope Pius XII’s 1943 encyclical Divino Afflante Spiritu in the book’s introduction.

What is the literal sense of a passage is not always as obvious in the speeches and writings of the ancient authors of the East, as it is in the works of our own time. For what they wished to express is not to be determined by the rules of grammar and philology alone, nor solely by the context; the interpreter must, as it were, go back wholly in spirit to those remote centuries of the East and with the aid of history, archaeology, ethnology, and other sciences, accurately determine what modes of writing, so to speak, the authors of that ancient period would be likely to use, and in fact did use.

For the ancient peoples of the East, in order to express their ideas, did not always employ those forms or kinds of speech which we use today; but rather those used by the men of their times and countries. What those exactly were the commentator cannot determine as it were in advance, but only after a careful examination of the ancient literature of the East. The investigation, carried out, on this point, during the past forty or fifty years with greater care and diligence than ever before, has more clearly shown what forms of expression were used in those far off times, whether in poetic description or in the formulation of laws and rules of life or in recording the facts and events of history. The same inquiry has also shown the special preeminence of the people of Israel among all the other ancient nations of the East in their mode of compiling history, both by reason of its antiquity and by reasons of the faithful record of the events; qualities which may well be attributed to the gift of divine inspiration and to the peculiar religious purpose of biblical history.

As both an Ancient Near Eastern Studies graduate and as a Latter-day Saint who accepts the Bible as more than a mundane book but a book of scripture, I heartily endorse these remarks from Pius XII. In fact, I would say that my academic career at BYU was in large part oriented towards trying to strike the kind of position Pius XII advocates here. It’s a position that I believe is wholly in harmony with what’s taught in the Doctrine and Covenants (D&C 88:78–80, 118; 90:15; 93:53) and what was taught by Brigham Young.

Unfortunately for my inner-ANES nerd, this is not the position that was delineated by the First Presidency (at the time Ezra Taft Benson, Gordon B. Hinckley, and Thomas S. Monson) in a 1992 official statement (which was included with slight variation in the 2010 edition of the Church’s handbook). “Many versions of the Bible are available today,” the statement uncontroversially and straightforwardly reads. “Unfortunately, no original manuscripts of any portion of the Bible are available for comparison to determine the most accurate version. However, the Lord has revealed clearly the doctrines of the gospel in these latter-days. The most reliable way to measure the accuracy of any biblical passage is not by comparing different texts, but by comparison with the Book of Mormon and modern-day revelations” (emphasis added). As I read it, this statement from the First Presidency essentially dismisses the sort of critical studies Pius XII stressed were at times necessary to uncover the meaning of the Bible. Instead of engaging the Bible critically, the statement appears to say, in order to resolve ambiguities or problems in the biblical text you should just compare the Bible with modern LDS scripture and call it good.

What’s more, the First Presidency goes on to say, “While other Bible versions may be easier to read than the King James Version, in doctrinal matters latter-day revelation supports the King James Version in preference to other English translations.” I confess that I find this statement truly baffling. What “doctrinal matters” does modern revelation preference in the KJV over other contemporary English translations of the Bible? Perhaps the First Presidency here is hearkening back to President J. Ruben Clark’s objections towards the Revised Standard Version that appeared in his 1956 volume Why the King James Version. Among other things, President Clark objected to the language of the RSV that appeared to deemphasize the divinity of Jesus or gloss over doctrinal matters highly valued by Latter-day Saints (such as the ordination and role of the apostles in the New Testament church). Perhaps this is what the First Presidency meant in 1992 when it said that “latter-day revelation supports the King James Bible,” since we Latter-day Saints draw from the religious vocabulary of the KJV in framing our own theological discourse on a whole bunch of topics.

Even so, I am truly conflicted over the 1992 statement because it appears to run contrary to the paradigm I have formed since even before my formal studies at BYU. There’s no stuffing the exegetical and critical genie back into the bottle when it comes to how I now read the Bible. On one level it would be nice if I could go back to what Philip Barlow called the “hermeneutical Eden” that most Latter-day Saints dwell in, “innocent of a conscious philosophy of interpretation.” It would be nice if I didn’t have to worry about the Documentary Hypothesis, or the Synoptic Problem, or the historicity of the exodus, or the authorship of the pseudo-Pauline epistles. It would also be nice if the ancient authors and redactors of the biblical books were proto-Latter-day Saints in every detail, who believed and thought %100 like we do in the Church today when it comes to doctrinal and moral matters. But I really don’t have a choice anymore. I can’t read the Bible and not have these issues on my mind.

To be fair, I think I agree with what I think is the basic point being made by the First Presidency. It’s true that readers of the Bible can become so bogged down in fretting over critical issues that they miss the forest for the trees. As a book of scripture, the Bible can and should be read primarily as a book of God’s dealings with his children. And not just that, but also as a book of inspired teachings that are relevant and authoritative here and now, and not just in the Iron Age or classical Antiquity. I am nevertheless dismayed at both the framing of the issue in and the reasoning behind the 1992 statement. The reason I really dig Pius XII’s encyclical is because I absolutely believe that Latter-day Saints (and other believing Christians and Jews, for that matter) can engage in a critical or academic study of the Bible while still remaining believers in the Bible as scripture. It’s not an either/or situation. Those committed to belief in the Bible as scripture have no need to fear critical study of the biblical texts. This is, as I read it, basically what Pius XII is getting at. To be sure, this doesn’t mean that it’s always going to be easy reconciling these two (i.e. critical and devotional) approaches to scripture. Nor, on the flip side, does it mean that we’re supposed to automatically surrender our theological positions or faith convictions to whatever trendy fad theory du jour is being bandied about in academia. Rather, what I think the Pope is basically saying is that if we’re going to take the Bible seriously, we owe it to ourselves to engage the Bible not only theologically and from a position of faith but also critically and from a position of reason.

That’s what I was taught to do while studying the Bible at BYU. That’s what I believe is commanded in latter-day scripture. That’s the pattern that has been set for me by Joseph Smith and Brigham Young and many other committed and faithful Latter-day Saint disciple-scholars. And that’s what will instill a deep love and appreciation for the Bible. I know it has for me, at least.