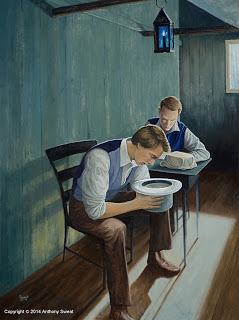 Not long ago I posted a note from Michael McKay and Gerrit Dirkmaat on why the gold plates were necessary despite Joseph Smith translating the Book of Mormon by revelatory means. Here is a follow-up by McKay and Dirkmaat published just this month.

With Joseph looking into the hat at the seer stones, what need was there for Joseph to even have the plates in his possession? While most of the Book of Mormon translation accounts say little in this regard, the plates may well have served several purposes. Their mere existence may have instilled in Joseph with confidence that the words that appeared on the stones were from an ancient record. In the face of persistent pestering, carrying and possessing the plates would have sustained his confidence that the translation process was authentic. His mission was to “translate the engravings which are on the plates” (D&C 10:41), and he spent some time scrutinizing and transcribing some of the characters on them. Yet the translation usually occurred while the plates lay covered on the table (although some accounts suggest that the plates were sometimes kept in a nearby box under the bed or even hidden in the Whitmers’ barn during translation). In addition, the plates encouraged belief in the minds of needed supporters, such as Emma, the Whitmer family, and the Three and the Eight Witnesses, each of whom spoke of having various experiences touching, hefting, feeling, and seeing the plates. The text of the Book of Mormon is abnormally self-aware of the plates; it focuses again and again on the provenance of and the sources by which Mormon and Moroni compiled the gold plates. It essentially tracks the gold plates and their source material from person to person until the plates end up in the hands of Joseph Smith. The Book of Mormon even prophecies of Joseph’s possession and translation of the record. Therefore, the physical plates fulfill thousands of years of preparation, and the witnesses provide authentication of the historicity of the plates. The plates were therefore indispensable for validating the ancient nature of the Book of Mormon.

So I ask again: what’s the big deal? Seems pretty straightforward to me.

While we’re at it, here’s a nice thought from Steven C. Harper:

When it comes to the Book of Mormon witnesses, the question is which historical documents is one willing to trust? Those whose faith has been deeply shaken sometimes find it easier to trust lesser evidence rather than the best sources or the overwhelming preponderance of the evidence. But that choice is not a foregone conclusion. It is neither inevitable nor irreversible. . . . Why not opt to believe in the direct statements of the witnesses and their demonstrably lifelong commitments to the Book of Mormon? This choice asks us to have faith in the marvelous, the possibility of angels, spiritual eyes, miraculous translation, and gold plates, but it does not require us to discount the historical record or create hypothetical ways to reconcile the compelling Book of Mormon witnesses with our own skepticism.