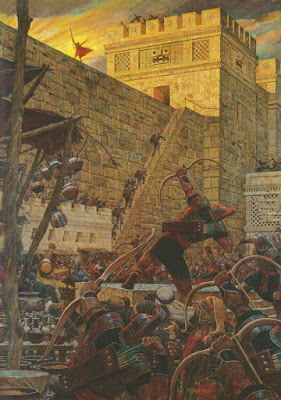 In his “Letter to a CES Director,” Jeremy Runnells claims that the story of Samuel the righteous Lamanite preaching repentance to the apostate Nephites in Helaman 13–16 demonstrates Joseph Smith was guilty of plagiarizing Ethan Smith’s book View of the Hebrews. (On this accusation generally, see here, here, here, here, here, and here.)

Runnells offers the following “parallels” between the two texts to substantiate his argument:

Upon closer inspection, these parallels begin to fall apart.

First, what Runnells doesn’t tell us is that the passage in question from View of the Hebrews is in reality quoting an incident recorded by Josephus (Wars 6.5.3). In this account, Jesus son of Ananus is depicted as an apocalyptic prophet of sorts (such were common at the time, and Jesus of Nazareth himself has been categorized as such by many New Testament scholars) foretelling the destruction of Jerusalem by the Romans in the first century AD. Josephus depicts Jesus as a Jewish “plebeian and a husbandman” who caused a ruckus for “seven years and five months.” Contrast this with Samuel, who is depicted as a Lamanite outsider coming into the “land of Zarahemla” and merely preaching for “many days” before he was tossed out by the people (Helaman 13:2). Only when God commands him to return does Samuel go “upon the wall” of the city because he had been barred entrance (Helaman 13:4), unlike Jesus, whom Josephus reports “went about by day and by night, in all the lanes of the city.” Only at the end of his life and ministry did Jesus go “upon the wall” of Jerusalem to preach during a break in the Roman siege. It was at this time, Josephus says, that Jesus was killed by a stone (not “stones” as Runnells claims) hurled by a Roman siege engine, not an angry mob. In Helaman 16 “many” Nephites, fed up with Samuel, threw stones and arrows at the prophet and sent foot soldiers to capture him (Helaman 16:2–6). Unlike poor Jesus, Samuel escapes “unto his own country” and is never heard of again (Helaman 16:7–8).

So Ethan Smith wasn’t inventing a fictional character. He was actually referencing an ostensibly historical figure from 1st century Palestine who did basically the same thing as Samuel the Lamanite at basically the same time, only for much longer: cry doom against the people. Jesus and Samuel were merely following the venerable Israelite tradition of Jeremiah and other Hebrew Bible prophets who did the same thing in their own respective times. Thus, far from being detrimental to the Book of Mormon, this actually shows the Book of Mormon is rooted in the same ancient prophetic tradition that spanned Israel’s history from Jeremiah in the 7th century BC to the time of Jesus Christ in the 1st century AD.

This may seem like a trivial thing, but it actually demonstrates that Runnells is playing fast and loose with the Book of Mormon. It never once says “wo, wo to this city” or “wo, wo to this people” in the passages from Helaman that he cites.

What is thus a supposed mark against the Book of Mormon is actually evidence for its antiquity.

11 thoughts on “Does Helaman 13–16 Plagiarize View of the Hebrews?”