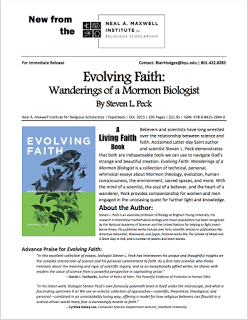 As an article of faith, The Church of Jesus Christ of Latter-day Saints affirms, “We believe all that God has revealed, all that He does now reveal, and we believe that He will yet reveal many great and important things pertaining to the Kingdom of God” (Article of Faith 9). Among the many “great and important things” that are yet to be fully revealed are the details of the Creation. “Yea, verily I say unto you, in that day when the Lord shall come, he shall reveal all things,” says an 1833 revelation to Joseph Smith. “Things which have passed, and hidden things which no man knew, things of the earth, by which it was made, and the purpose and the end thereof” (D&C 101:32–33). In the meantime, the Lord has commanded Latter-day Saints to “seek . . . out of the best books words of wisdom” (D&C 88:118). Undoubtedly this includes the best books on the natural sciences. Accordingly, there have been many influential Latter-day Saint scientists, including James E. Talmage (geology), John A. Widtsoe (biochemistry), Henry Eyring (chemistry), Philo T. Farnsworth (electrophysics), Harvey Fletcher (physics), and Richard G. Scott (nuclear physics), to name only a few. In addition to their noteworthy scientific work, these Latter-day Saints also delved, to varying degrees, into Mormon theology and grappled with how to harmonize the truths of God with the truths of science.

With his new book Evolving Faith: Wanderings of a Mormon Biologist (published by the Neal A. Maxwell Institute for Religious Scholarship as a new volume in the institute’s “Living Faith” series), the Latter-day Saint evolutionary biologist and ecologist Steven L. Peck, an associate professor of biology at Brigham Young University, has secured his position as one of the great contemporary Latter-day Saint scientific-theological expounders. His anthology of writings (which first appeared in previous venues) addresses such topics as evolution, environmentalism, ecology, consciousness, and creation from a faithful Latter-day Saint perspective. Peck shares scientific, theological, and personal insights into these and similar topics in, ultimately, an attempt to get Latter-day Saints to “embrace good science and the truths of the gospel without compromising either one” (p. 7). As Peck insists, “Both science and faith are important and valid lenses through which we come to understand the world and our place in it” (p. 7).

Evolving Faith begins, wisely, with a discussion of the scientific method compared to a revelatory-based epistemology. “I have found that both science and religion can make vital contributions to the ways we understand the universe in its fullness” (p. 11). The key, Peck argues, is to properly understand each category, including their limitations, and thus avoid confusion or dogmatism. “Those who use science to attack religious perspectives are engaging in a blatant misuse of science,” Peck writes. However, “Religion is sometimes used inappropriately to dismiss science as a legitimate way of knowing” (p. 11). To avoid this trap, Peck explains the scientific method and urges Latter-day Saints to shun such things as scriptural “literalism,” or “the risk of robbing the scriptures of their intended effect” by insisting they only be read in a hyper-literal or fundamentalist paradigm (p. 17). “The purpose of scripture is to connect us to deeper, more important realities,” Peck reminds us, “about which science can offer no insight” (p. 17). By adopting a more nuanced paradigm concerning the relationship between reason and faith, science and scripture, Latter-day Saints can largely (though, admittedly, not always entirely) avoid stumbling blocks that may damage faith or testimony. Likewise, by eschewing literalism and fundamentalism, Peck reassures his reader that faith can be strengthened.

The scriptures facilitate contemplation of the more profound aspects of the universe, enabling us to experience the influence of the Spirit of God and opening grander and more prescient truths about the meaning of existence and our place in the universe. These truths have little to do with the mechanical workings of the universe–––they relate only to the spiritual realities that open us to a relationship with God and his other children on a higher level than the surface realities obtained by objectively inclined science. (pp. 17–18)

After laying this groundwork, Peck moves swiftly onto such topics as the philosophical underpinnings of subjectivity as an epistemology (pp. 23–44), evolution (pp. 45–78), and consciousness (pp. 79–106). Peck’s exploration into each of these subjects, while each interesting in its own right, left me variously satisfied. His thoughts on subjectivity and how Latter-day Saints might view consciousness from a doctrinal perspective (particularly in light of D&C 131:7–8) were deeply interesting, but I confess I was a tad disappointed in his argument for the compatibility of evolution and Latter-day Saint theology. Peck covers the science behind evolution well enough, and his enthusiasm for science and evolution is admirable, but I wasn’t enthralled by his conclusions on how it relates to Mormon theology. Not that I necessarily disagreed with him, but rather I was left wanting more. “Our doctrines,” Peck concludes, “informed by evolution, answer questions about why such a cruel and wasteful process was chosen for creation and resituate the problem of evil” (p. 73). This may very well be, as others have also argued. But I felt that in his treatment Peck offered little beyond a series of questions with only “speculative” (a word peppered throughout the chapter) answers. To be fair, Peck himself does not pretend to have the final word on the matter, and he wisely avoids the sort of dogmatism he had just barely decried. Nevertheless, I was left wanting more. Maybe it is unrealistic of me to expect it, given our limited revealed knowledge on the topic, but I was hoping Peck would give a more substantive theological harmonization with evolution than he did.

The final part of Evolving Faith is a collection of Peck’s musings on such topics as environmentalism (pp. 139–156), theodicy (pp. 165–172), and sacred space (pp. 191–202). Concerning the first, Peck makes a convincing case for Mormon environmentalism. Even if Mormon environmentalism may not always align with modern political environmentalism, Peck insists that “LDS theology [nevertheless] provides a strong environmental ethic. Reasons for caring for creation are clear and justified from scripture, prophetic utterances, and the teachings of LDS leaders and scholars” (p. 148). Some of these “leaders and scholars” include Elder Marcus B. Nash and Hugh Nibley. In this regard, Peck is in good company. I thus welcome Peck’s call to environmental care and consciousness among Latter-day Saints, who owe it to themselves and everyone else on the earth to protect and conserve the resources God has granted us on our terrestrial home.

In the end, I would judge Evolving Faith an admirable step in the right direction. Latter-day Saints need not fear science, even when it appears to contradict their doctrine. “Is there any conflict between science and religion?” Henry Eyring once rhetorically asked. “There is no conflict in the mind of God, but often there is conflict in the minds of men.” This is only natural, as while on this mortal sojourn, filled as it is with its limitations, ambiguities, contradictions, and nuances, “we see through a glass, darkly” (1 Cor. 13:12). But rather than retreating away from this conflict, Peck encourages Latter-day Saints to charge forward and think critically and robustly about science, scripture, nature, and God. Readers may not agree with all of his answers, and in some cases may be left wanting more (as I was in one instance), but Peck is nevertheless to be lauded for his enthusiasm and thoughtfulness. His meditations on not just science but also such issues as suffering, holiness, and awe for creation reflect a maturity that should be welcomed in contemporary Latter-day Saint discourse.

I would therefore recommend Evolving Faith as a wholesome exploration into how science can inform our understanding of God’s awe-inspiring Plan of Salvation.