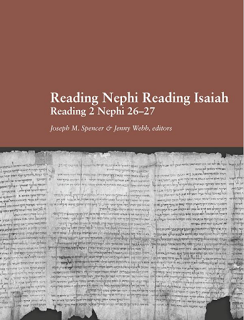 “And now I, Nephi, write more of the words of Isaiah, for my soul delighteth in his words. For I will liken his words unto my people, and I will send them forth unto all my children” (2 Nephi 11:2). Nephi’s effusive love for Isaiah is well-known to readers of the Book of Mormon. Unfortunately, that love is often not found on the part of Nephi’s modern audience, which frequently skips over the seemingly cryptic passages of the 8th century Judean prophet as reproduced in 2 Nephi.

Thankfully, through the diligence of a handful of commenters, Isaiah’s words, and how Nephi read Isaiah’s words, have been illuminated for the benefit of those who otherwise might have difficulty working through “the Isaiah chapters.” In the late 1990s FARMS produced a volume dedicated to studying Isaiah in the Book of Mormon. Book of Mormon Central not too long ago released a slew of KnoWhys that addressed this topic. And earlier this year the Maxwell Institute republished Joseph Spencer’s excellent book An Other Testament: On Typology.

The latest on Isaiah in the Book of Mormon comes once again from the Maxwell Institute. Edited by Joseph Spencer and Jenny Webb, Reading Nephi Reading Isaiah: Reading 2 Nephi 26–27 is a welcomed addition to the growing library of works on how the Book of Mormon interacts with the words of Isaiah. The volume collects a number of essays that touch on “what it means to read Mormon scripture in a Mormon context” (p. 2). To explore this, the contributors focused on how Nephi reads Isaiah in 2 Nephi 26–27. What they reveal is that “in these chapters, Nephi carefully reads the writings of Isaiah (specifically Isaiah 29) in a multifaceted process that involves copying, interpreting, contextualizing, repurposing, recontextualizing, and prophesying–––all at once” (p. 2). As such, “Nephi’s own rereading of Isaiah’s original text powerfully illuminates what it means to actively but faithfully engage in the difficult and unavoidable creative work of reading scripture” (p. 2).

The offerings in include: “Nephi, Isaiah, and Europe” (pp. 17–32), “How Nephi Shapes His Readers’ Perceptions of Isaiah” (pp. 33–58), “Slumbering Voices: Death and Textuality in 2 Nephi” (pp. 59–74), “Seals, Symbols, and Sacred Texts: Sealing and the Book of Mormon” (pp. 75–88), “On the Moral Risks of Reading Scripture” (89–104), and “Works of Darkness: Secret Combinations and Covenant Displacement in the Book of Mormon” (pp. 105–122). While I didn’t dislike any of the offerings, some were more engaging and others. I was, for example, deeply interested in Jenny Webb’s novel thesis that Nephi, in his reappropriating and “likening,” symbolically “kills” Isaiah as an author. Taking her cue from Roland Barthes’ famous concept of “the death of the author,” Webb writes, “Death is the act through which the voices of the righteous are transfigured so that they may be brought forth as the words of the book, as scripture. . . . Isaiah ‘lives’ in Second Nephi, a formidable textual force that has stopped many of the intrepid reader, only to ultimately ‘pass away’ into Nephi’s own prophecy. Nephi assumes his prophetic mantle and authorship through the symbolic killing of Isaiah as his (Isaiah’s) words are buried beneath Nephi’s decontextualization in order to meet Nephi’s own prophetic necessities” (pp. 70–71).

This compliments the observations of Heather and Grant Hardy (the latter of whom also has an excellent treatment of Isaiah in the Book of Mormon). They argue that Nephi’s likening of Isaiah directly “shapes his readers’ perceptions” of the biblical prophet (p. 57). In other words, when we read 2 Nephi we are not so much looking at what Isaiah meant in his prophecies as we’re looking at what Nephi wants us to think about Isaiah.

Nephi’s signature strategy is to use his own vision of God’s providential plan for the Lehites (from 1 Nephi 11–14) as a template for understanding the destiny of the entire house of Israel. Into this framework, Nephi fits particular passages from Isaiah and other brass plates prophets, and, in the subsequent extrapolation from the part to the whole, he articulates a comprehensive sequence of anticipated events. (p. 56)

So, when readers encounter Nephi’s selections of and commentary on Isaiah, they should be aware that he is guiding them through a specific interpretive framework that he wants them to utilize in understanding these passages.

This critical method might trouble readers with more fundamentalist assumptions about the nature of scripture, but hopefully instead of perceiving such as some kind of an attack (the authors are highly reverential towards both Isaiah and Nephi), said readers will recognize the strength and meaning found in this form of scriptural exegesis. Hopefully they will pay close attention to George Handley’s provocative essay “On the Moral Risks of Reading Scripture,” which emphasizes that, while scripture study is crucial, “what we are reading in scripture is always partial, incomplete, and stained by human weakness” (p. 104). Accordingly, we need to be patient with “our broken readings” of scripture until further light and knowledge incrementally guides us to stronger, more robust, more faith-fulfilling understanding (p. 104).
In short, Reading Nephi Reading Isaiah is excellent. Each essay is thought-provoking and offers fascinating insights into 2 Nephi specifically and scripture reading generally. Readers of the Book of Mormon who seriously want to understand the Isaiah chapters therein should pick up a copy of this book.