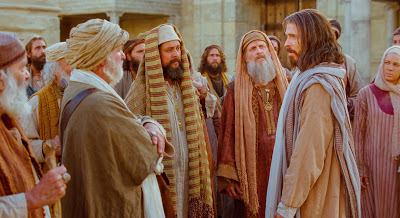 In Judaism exists the concept of the khumrot (חומרות), or proscriptions that are implemented to safeguard the halakhah (הלכה)–––the body of Jewish religious laws–––from being transgressed. The khumrot of Orthodox Judaism are not the laws themselves, but are instead measures taken to ensure the faithful do not even come close to breaking the laws.

Jewish khumrot have been articulated over time in response to a law given in Deuteronomy. “If you build a new house, you must construct a guard rail around your roof to avoid being culpable in the event someone should fall from it” (NET Deuteronomy 22:8). The Mishnah (Pirkei Avot 1.1) puts it this way:

No less than the great Rabbi Akiva himself is quoted in the Mishna (Pirkei Avot 3.13) as insisting, “Tradition is a safety fence to Torah” (מסורת סייג לתורה).

That believers would want to make “safety fences around the law” is completely understandable, and even commendable. It is wise to set boundaries and parameters that help us keep God’s commandments. Jesus himself did exactly this with the commandments prohibiting murder (Matthew 5:21–26) and adultery (Matthew 5:27–30), in how we make oaths and vows (Matthew 5:33–37), in how we pray (Matthew 6:5–15), and with a host of other issues.

At the same time, however, Jesus was not afraid to break down “fences around the law” that he felt were troublesome, burdensome, unnecessarily proscriptive, or missed the point of the original law entirely. For instance, Jesus and his disciples healed on the Sabbath (Matthew 12:10–13; Mark 3:1–6; Luke 13:10–17) and worked for food on the Sabbath (Matthew 12:1–9; Mark 2:23–28; Luke 6:1–12) in direct contradiction to the “fences around the law” (of keeping the sabbath holy) that his religious rivals and antagonists had established.

(To be sure, the rabbinical articulations of the khumrot postdate Jesus by some time, but the basic idea is still essentially the same.)

While the impulse to build “fences around the law” is understandable and has merit, the problem believers quickly encounter is when they mistake the fences for the laws they are protecting. This was the problem Jesus had with his interlocutors who accused him of wrongdoing or transgressing God’s commandments. Jesus’ normal response was to point out their hypocrisy, since they themselves were, in his mind, no longer keeping the commandments out of devotion to God as much as they were obsessing over the man-made minutiae they themselves had accrued over centuries of tradition.

Woe to you, experts in the law and you Pharisees, hypocrites! You give a tenth of mint, dill, and cumin, yet you neglect what is more important in the law—justice, mercy, and faithfulness! You should have done these things without neglecting the others. Blind guides! You strain out a gnat yet swallow a camel! (NET Matthew 23:23–24)

This impulse to build fences around the law, as well as the attending dangers of doing such, exists today. Members of The Church of Jesus Christ of Latter-day Saints have over time built their own “fences around the law.” Individually, culturally, and institutionally.

A few examples will suffice.

First, there is the cultural proscription against watching R-rated movies. This may doubtless seem pedantic to mention, but nowhere in the scriptures is watching R-rated movies condemned as sinful. Rather, the scriptures teach us to “stay away from every form of evil” (1 Thessalonians 5:22) and seek after “anything virtuous, lovely, or of good report or praiseworthy” (Article of Faith 13).

In order to protect these scriptural teachings, Mormons have built a fence around the law by enacting cultural prohibitions against R-rated movies. Some enterprising Mormons have even devoted no small amount of time and labor to provide filtering services for movies that do all the work for you. With the click of a button you can remove all of the R-rated content found in movies.

The rationale, of course, is that “anything virtuous, lovely, or of good report or praiseworthy” won’t include vulgarity, violence, sexuality, or other challenging or offensive content not deemed “wholesome” enough for viewing. Thus, R-rated movies are intrinsically off limits.

I need not spend too much time pointing out the many questions, problems, or ambiguities with this particular Mormon khumra. Others have done that already. (See the discussions, from different angles, here, here, here, here, and here.) What’s important to point out for now is that many who raise the khumra against watching R-rated movies are confusing it with the scriptural teachings themselves.

Second, the Church has produced a pamphlet for teenagers that perfectly encapsulates both the wisdom and pitfalls of building fences around the law. 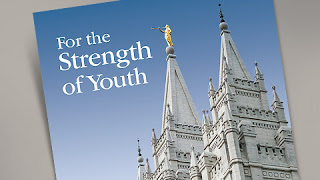 For the Strength of Youth could almost be read as a rabbinical tractate. It is filled with rules, regulations, and proscriptions for the Church’s youth that, in theory, are meant to help them keep or otherwise interpret the commandments and live godly lives. These latter-day khumrot range from how and when to date, how to prevent situations where one might break the law of chastity, what media to watch (but notice it says nothing about R-rated movies!), what dress and speech is preferable and when, and how to observe the sabbath (sound familiar?).

I want to emphasize that much in For the Strength of Youth is wise and helpful. I am by no means advocating that Church members just chuck the entire thing out the window. However, I personally know many members of the Church who have, it seems, mistaken the guidelines and counsel given in this publication for the commandments themselves. Additionally, I have read many accounts (including many that are horribly awkward or outright disturbing) of those who have had negative experiences in the Church because of members or leaders who demanded exacting or pharisaical interpretations of publications such as For the Strength of Youth (or the Church’s Handbook).

If we are not diligent, we, like Jesus’ antagonists, are at risk of confusing the weightier matters of the law with institutional and cultural accumulations that, while well-intended, can alienate and distress more than help.

To put a fine but quick point on it, I’ll simply direct readers’ attention to this blog post by a gay BYU alumnus. It’s difficult for me to see how this particular fence around this particular law (the Law of Chastity) is helpful more than hurtful when it comes to LGBT members of the Church.

Ultimately, I think the message of Jesus is to move beyond making fences around the law and become the kind of disciple where the fences aren’t even necessary. “Be ye therefore perfect, even as your Father which is in heaven is perfect” (Matthew 5:48; cf. 3 Nephi 12:48). Of course, as fallible human beings living in a fallen world this will not be possible to do all at once, and not without the Saviour’s help.

But we can at least strive for it.

2 thoughts on “Latter-day Khumrot and “Fences Around the Law””