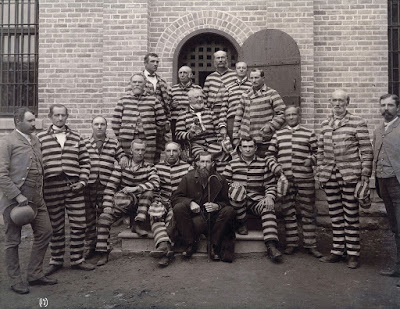 That there could be any Mormons who espouse Islamophobia truly baffles me. Like, seriously. I cannot wrap my mind around it. If anyone should by sympathetic to the plight of a denigrated and (often maliciously) misunderstood and misrepresented religious minority in the United States, it should be us.

And here’s why. What
follows is a basic reconstruction of the popular 19th century
American view towards Mormons and Mormonism. This captures the essence of what you
find 19th century Americans were saying about Mormonism in newspapers,
popular media, academic literature, sermons, and even government reports.

See if it sounds at all familiar to what you hear today about Muslims and Islam in some circles.

You are living in
America’s Gilded Age. Just a few years ago America tore itself apart with civil
war. But since then the nation is starting to heal itself and is binding up old
wounds. A new national identity is being forged that will unite Americans once
again. Your nation has made unbelievable
advances in industry, technology, culture, and commerce. Through American
ingenuity and by Divine Providence you can truly be proud of your place at the
pinnacle of modern civilization. Your culture is the epitome of white Protestant capability.

But there remain threats to
this Pax Americana. Threats to white
Protestant American identity and stability.

Not just Chinese and Irish
immigrants and Roman Catholics, mind you. Out in the desert wasteland of Utah
are the Mormons. Sure, they talk about being a Christian religion that values
freedom and peace, but make no mistake about it. This is
not a benign religion. The Mormons are a very real and immediate threat
to America.

Within living memory they have introduced anti-Christian superstitions and
humbugs with their blasphemous talk of modern revelations and new scripture. Led
by their fanatical false prophet Joe Smith, an American Mahomet, the Mormons have not just
blasphemed God, but have usurped the law, have attempted to forcibly seize
power, have robbed and pillaged American settlements, have murdered innocents,
and continue to deceived gullible dupes day by day. They were so violent and
unlawful, in fact, that that they had to be forcibly exterminated from states such
as Missouri and Illinois to maintain the peace and keep American citizens safe.

Now they have set up a theocracy in the desert
where their prophet controls every aspect of their lives. Economic and
political power rest in the hands of a few men who claim direct inspiration
from God. And the Mormons blindly follow these sinister prophets. They are
authoritarian and vote en bloc according to the commands of their leaders. Brigham
Young and others preach blood atonement, which allows for the murder of
dissenters and apostates. They oppress women by practicing polygamy, a vile, immoral corruption that was introduced by the lecherous Joe Smith. This monstrous affront
to any sense of civilized Christian morality has no place in America, and must
be put down by law. (Which is why, thankfully, the Supreme Court upheld
anti-polygamy laws in 1878, thus protecting traditional marriage and society at large.)

Their missionaries travel
far and wide to trick people, especially gullible women, into joining their
cult. Then they steal any of their property or money by their “law of consecration”
(which is really just a scheme for Mormon leaders to become rich). Yes, that’s
right. Mormons have a religious law that they one day hope to impose on all
Americans. Just read their scriptures, which speak of this law (as well as other religious laws) being imposed
when Jesus returns and the Mormons claim our lands for themselves. (They tried
that in Missouri in the 1830s, but were thankfully stopped.)

When non-Mormon “Gentiles”
came through their territory, the Mormons massacred them. That’s how intolerant and bloodthirsty the
Mormons are. The Mormons are so restless that the army had to send an expeditionto Utah to pacify them. Civilly disobedient to the extreme, the Mormons openly defied
the army and federal laws that were enacted to stop their theocratic madness
from claiming more victims. They are a pack of lawless thugs terrorizing our country.

America won’t be safe from
the Mormons if they were to gain any power. American democracy will perish if
Mormon fanaticism is allowed to flourish. Mormonism is an assault on the very
moral fabric of society. That’s why “President Rutherford B. Hayes’ secretary
of state William Evarts wrote to US diplomats asking them to seek help from
European governments to keep Mormon converts from traveling to the US. And in
1883 President Grover Cleveland asked Congress to ‘prevent the importation of
Mormons into the country,’ according to ‘Immigration and the ‘Mormon Question’ by William Mulder.”

And why not? After all,
scientists and medical authorities have proven that “Mormons [are] racial
outsiders,” and more racially comparable to inferior races such as blacks and orientals than to us whites. Mormons are “not merely a theological
departure from the mainstream, they [are] racially and physically different.”
We need to stop our white Protestant culture from being overrun by the racially
inferior Mormons. We need to stop the white genocide happening in this country.

That’s why we are going to strip Mormons of their rights (right to vote, hold office, hold property, worship as they please, etc.) for our own safety and protection. We need strong leaders who know how to be tough negotiators and who can restore law and order in our country. We need secure boarders from Mormon immigrants until we can figure out what’s going on here.

1 thought on “Make America Great Again! (By Protecting it from the Mormons)”