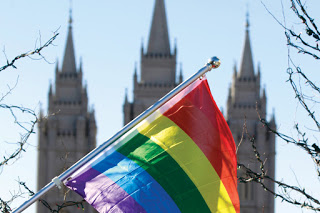 During his mortal ministry, Jesus commanded his disciples to restrict their preaching to the house of Israel.

Then Jesus summoned his twelve disciples . . . [and] sent [them] out with the following instructions: Go nowhere among the Gentiles, and enter no town of the Samaritans, but go rather to the lost sheep of the house of Israel. As you go, proclaim the good news, ‘The kingdom of heaven has come near.’ (Matthew 10:1, 5–7)

This policy of restricting the preaching of the gospel to the “lost sheep of the house of Israel” was eventually altered, but only after Jesus’ mortal ministry. As recounted in Acts 10, the vision received by one Cornelius, “a centurion of the Italian Cohort” and “a devout man who feared God” (Acts 10:1–2), catalyzed revelation on the part of Peter, the president of the first century church, if you will (vv. 9–16).

The result of Cornelius’ conversion (Acts 10:44–48) was the taking of the gospel to the Gentiles. It also resulted in immediate criticism of Peter by members of the church.

Now the apostles and the believers who were in Judea heard that the Gentiles had also accepted the word of God. So when Peter went up to Jerusalem, the circumcised believers criticized him, saying, “Why did you go to uncircumcised men and eat with them?” (Acts 11:1–3)

The acceptance of (uncircumcised!) Gentiles into the church was too shocking for these pious Jewish members. It was too drastic of a paradigm shift for these members to accept. What was true for Joseph Smith’s day was, evidently, also true in the first century, namely, that members of the church were prone to “fly to pieces like glass as soon as anything [came] that [was] contrary to their traditions.”[1]

The subsequent schism and division in the early church over the issue of Gentile converts was so pronounced, in fact, that the leadership of the church convened a council to determine a (hopefully unifying) course forward (Acts 15). But problems persisted, and personalities within the church clashed. Famous is the stance derived by Paul, who emphasized the grace of Christ as sufficient for Gentile converts, not adherence to Mosaic rites. Paul, however, faced considerable opposition among the so-called Judaizers of the church, or early Christians who insisted on Gentile adherence to the Law of Moses, specifically circumcision.

This example from the primitive church brings to mind what is one of the foremost vexing social issues facing the Church of Jesus Christ today: the church’s stance on same-sex marriage and the position of lesbian, gay, and bisexual (LGB) members of the church. The manifestation of this controversy may be easily explained by what is basically the theological and moral equivalent to when an unstoppable force (the progress of LGB advocacy) collides with an immovable object (the quite literally cosmic heteronormativity of The Church of Jesus Christ of Latter-day Saints).

I will not hash out the fine details of the controversy in this post. Anybody who has paid any attention at all to this matter will undoubtedly be familiar with what the stakes and parameters of the debate are. Suffice it to say for now that despite the hopeful patience of some, and the thought-provoking (though debatable) theological musings of others, at this point it is next to impossible for me to imagine the Church changing its theological and moral position on same-sex marriage. For better or for worse, I simply cannot fathom such a thing happening. I of course might ultimately be wrong, but for now my glance at the discursive and administrative tea leaves does not vouchsafe any change towards acceptance of same-sex marriages in the LDS Church.

(As a quick side note, I understand that transgender Mormons have some similar complications as LGB members of the Church, but their unique concerns are in many regards different from the focus of this post, and are therefore not going to be addressed at this time.)

Let us suppose that at the next General Conference President Thomas S. Monson were to stand before the pulpit in the Conference Center and announce that he had received revelation permitting same-sex sealings in the temple. Let us even suppose that a gay couple had come to him, much like Cornelius had come to Peter, and that their interaction with the prophet catalyzed the reception of a revelation that fundamentally upended the prevailing paradigm.

For starters, it would have to be acknowledged that this would be without question the most consequential theological and ecclesiological development in Mormon history. The only thing that would come close to being as consequential for the development and identity of the Church would be the abandonment of plural marriage at the end of the nineteenth century. But even then, theologically the allowance of same-sex marriages in the Church would be wholly unprecedented. Heterosexual monogamy can be easily derived from Mormon scripture; indeed, it is arguably the default. The same emphatically cannot be said of same-sex marriage.

Additionally, the entire conceptual framing of the Mormon cosmos would need to be fundamentally refashioned. Latter-day Saint teachings about eternal marriage and exaltation, to say nothing of orthodox sexual ethics (the Law of Chastity), would need a complete system reboot. The presentation of the endowment would need to be totally rewritten, with key narrative, covenantal, and doctrinal points of the temple liturgy being stripped of their heteronormative vestments. The canon would need to be expanded (Official Declaration 3?), and decades of attempts to do systematic Mormon theology would have to start over from scratch.

But besides Mormon theology and cosmology being fundamentally changed, what might be the temporal consequences of such an earth-shattering revelation? What might happen to the membership of the Church? To answer this question, I think the most illustrative historical example would be the announcement of the end of plural marriage. I am confident you would see schisms in the Church, with ultra-orthodox members resisting this development. I am fairly sure you would see a new wave of Mormon fundamentalism arise in response to this change. This fundamentalism would center around preserving a heteronormative Mormon cosmos. Fundamentalists of this persuasion, much like their polygamist predecessors a century ago, would muster arguments for how and why President Monson was either a false or fallen prophet.

I suspect that after the initial shock most members of the Church would come to accept this new paradigm. As with the jettisoning of polygamy, Church members would simply learn to adapt to the changing theology and ecclesiology. It would, I suspect, take time, but I think we would see a similar trend of Mormon transition into the new status quo that was seen a century ago.

In terms of Mormon apologetic discourse, I could foresee both lay members and General Authorities justifying this change the same way the revelation on the priesthood was justified. I can imagine a talk from an apostle in a subsequent General Conference going something like this: “Forget everything that I have said, or what President [Gordon B. Hinckley] or President [Russell M. Nelson] or whoever has said in days past that is contrary to the present revelation. We spoke with a limited understanding and without the light and knowledge that now has come into the world.”

What’s more difficult to predict would be the reaction of non-Mormons. I can imagine the reactions ranging from congratulatory salutations to resentment against the Church for just now “catching up” to bewilderment to dismissal. (“This ‘revelation’ was simply conjured to relieve political pressure.”) I am absolutely certain that ex-Mormon and progressive agitators would loudly bray about how they were right all along. Most assuredly a certain podcaster from Logan, Utah would be nothing if not supremely ungracious in this triumphant victory over homophobic bigotry, as he would suppose it to be.

And ultimately, what would this mean for LGB members of the Church? It would at once open a whole new world of possibilities and personal identities. It would be a stepping out of the closet into a post-heteronormative Narnia; a land of undiscovered and unchartered identity-territory.

Mind you, in none of this am I saying whether such a change would be a good thing or a bad thing. I am simply wondering as a sort of thought exercise what it might look like if it were to happen, and how looking at past examples (such as the one from the New Testament described above) might help our understanding if such dramatic changes were to ever arrive.

39 thoughts on “Of Gays and Gentiles: A Thought Experiment”