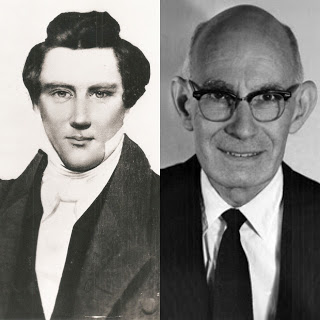 On March 26, 1830, the Wayne Sentinel announced the publication of the Book of Mormon by the Palmyra, New York printer E. B. Grandin. The book purports to be “an abridgment of the Record of the People of Nephi” written on plates of gold. The discoverer and translator of these plates, Joseph Smith, Jr., explained that upon completing the translation, the plates were returned to the custody of the angel that had directed him to the plates’ location. Thus, there is no original manuscript that remains for examination; only the testimony of those who had seen and handled the plates, and of course the printed translation.

A century later, another Smith, Morton by name, announced the discovery of a heretofore unknown letter written by the influential early Christian theologian Clement of Alexandria. The letter includes quotations of what purports to be a lost “secret Gospel” of Mark. In this “secret Gospel” Jesus attends to a youth “wearing a linen cloth over his naked body” and teaches him “the mystery of the kingdom of God” through the night. As with Joseph Smith before him, Morton Smith did not furnish any original manuscripts, but instead offered photographs of the text and a translation with commentary.[1]

The respective controversies continue unabated to this day.

Recently I encountered something interesting by one of Morton Smith’s defenders. Writing in the Journal of Biblical Literature, Scott G. Brown of the University of Toronto came to Smith’s defense by placing the burden of proof on those who level accusations of fraud. “For the case against Smith to merit serious consideration, it must meet the standards of legal prosecution, which means the ‘prosecutors’ must establish beyond reasonable doubt that the letter is a forgery, offer evidence connecting Smith with the manuscript, and demonstrate that the accused had the ability, opportunity, and motive to produce it.”[2]

Brown explains that those who accuse Smith of fraud typically employ three theories to explain the forgery: “(1) Smith forged the letter in order to discredit Christianity with evidence that Jesus was a homosexual; (2) he forged it as a hoax or joke for the personal satisfaction of duping his colleagues; and (3) he forged it as a controlled experiment in order to study how scholars respond to new evidence.”[3] These three theories Brown dismisses as being based on insufficient or circumstantial evidence at best or outright distorting Smith’s actual scholarship and claims at worse.

None of the three general hypotheses of motive bears scrutiny. The Gay Gospel Hypothesis is the bitter fruit of a widespread polemical distortion of Smith’s thesis that still poisons discussions of this subject. The Hoax Hypothesis requires us to ignore or disbelieve the abundant evidence that Smith took this text very seriously and generously assisted anyone who studied it. The Controlled Experiment Hypothesis was untenable even before [scholars] devised it, for had Smith been studying how scholars react to new evidence he would not have published his own theories about the text.[4]

Brown also points to “the private evidence of Smith’s sincerity, the large investment in time required to plan out and produce a compelling forgery of Clement, and the years of work that Smith devoted to the authentication and defense of this document” as further evidence against fraud. All told, “after three decades of speculation, Smith’s prosecutors have failed to demonstrate motive, a vital element in any case of forgery that is based on circumstantial evidence.” As such, Brown insists that the burden of proof remains on those who claim Smith fabricated the text.[5]

Whether or not the Secret Gospel of Mark is authentic, there are some interesting parallels that may be drawn between how Brown has defended (Morton) Smith and how Mormon apologists have defended (Joseph) Smith.

First, Daniel C. Peterson has traced the development of various theories to explain away the Book of Mormon and has shown how, one by one, these theories have either been exposed as lacking any real evidence or are not compelling enough on their own to withstand scrutiny, and so have been modified or even abandoned over the years.[6] As with the various (contradictory) theories that have been raised to explain the Secret Gospel as a hoax, Peterson notes that the various (contradictory) theories to explain the origin of the Book of Mormon cannot account for the available evidence. “The fact is, the falsehood of the Book of Mormon has no more been demonstrated to the satisfaction of all serious observers than has its truth. But what is even more striking is that critics of the Book of Mormon have not yet been able even to formulate a coherent counterexplanation, a unified global theory, with which to challenge the traditional story of the book’s origins.”[7]

Additionally, Mormon apologists have pointed to the “the private evidence of [Joseph] Smith’s sincerity, the large investment in time required to plan out and produce a compelling forgery of [the Book of Mormon], and the years of work that [Joseph] Smith devoted to the authentication and defense of this document” as evidence against fraud. “Most of the detailed sources [concerning the coming forth of the Book of Mormon] were written by believers,” explains Joseph Smith’s biographer Richard Bushman, “and to follow them too closely infuses a narrative with their faith. Secular historians are, therefore, more inclined than Mormons to suppress source material from Joseph’s closest associates.”[8] No serious scholar of early Mormonism today doubts the sincerity of Joseph Smith and his confederates in the production of the Book of Mormon (Oliver Cowdery, Martin Harris, David Whitmer, Emma Smith, and others). Of course, one may or may not believe Joseph’s account of the coming forth of the Book of Mormon, but what cannot credibly be maintained is that the Prophet acted out of consciously duplicitous motives. A veritable mountain of Joseph Smith’s personal papers decisively disproves any claims of insincerity, cynicism, or malice on his part.

Given these tactical similarities, if Brown is permitted to insist that the burden of proof yet rests on those who level accusations of fraud at (Morton) Smith, might we wonder why the Mormons are not allowed to insist the same when it comes to (Joseph) Smith and the Book of Mormon? After all, faithful Mormon scholars have provided ample justification for belief in the Book of Mormon’s authenticity, and have answered (to varying degrees of satisfaction, admittedly) accusations of fraud against the text. At what point do the tables turn, and the burden of proof shifts away from defenders of the Book of Mormon’s authenticity onto the shoulders of skeptics, who have neither accounted for this positive evidence nor the failings of their own theories?

It’s worth pointing out that C. Wilfred Griggs has asked similarly pertinent questions, and has likewise used Morton Smith’s claims as a point of comparison for the Book of Mormon.

An instructive example of how to treat a text such as the Book of Mormon has recently been provided through the providence of manuscript preservation and recovery. In 1958, Professor Morton Smith of Columbia University was examining manuscripts in a monastery near Jerusalem when he happened upon a two-and-a-half-page text purporting to be a letter of Clement of Alexandria (c. 150-c. 215) to a certain Theodore. The letter does not correspond to any previously known texts of Clement and there is no known Theodore who associated with the Alexandrian theologian. The paper on which the text was found is a heavy white binder’s paper commonly found on books in Venice during the seventeenth and eighteenth centuries, and the handwriting on the paper is dated variously from the late seventeenth century to the early nineteenth century. By scholarly consensus, Smith was able to establish 1750, plus or minus fifty years, as the date of the writing of the manuscript. Although the scribe is acknowledged to be experienced, as noted by good spelling and correct use of accents (the language is Greek), the nature of the writing indicates he was in a hurry. It is therefore impossible to tell whether he is responsible for the high quality of the text or is simply copying a work of unusually good literary and grammatical attributes.

The material in the letter was totally unexpected, especially since it speaks favorably of a Secret Gospel of Mark which was essentially sacramental or ordinance-oriented and which depicted Jesus as a mystagogue for Christians who wished to become perfect by being led as “hearers into the innermost sanctuary of the truth hidden by seven veils.” With the modern paper, modern handwriting, and unfamiliar and unexpected contents one would expect to have all the ingredients for a first-class forgery, but Smith moves on to what he considers “the primary test for authenticity,” namely, the examination of the text in terms of its claimed historical and literary context. After nearly 450 pages of comparing the style, language, and contents of the short text with already known ancient sources, Smith concludes that he had found a copy of an authentic letter of Clement, and “the consequences for the history of the early Christian church and for New Testament criticism are revolutionary.”

If a two-and-a-half-page text can elicit 450 pages of analysis and commentary in an attempt to determine its authenticity, one would not expect less from the scholarly world in the case of the Book of Mormon.[9]

Perhaps simply because Joseph Smith invoked supernatural forces in his account of the recovery of the Book of Mormon, the burden of proof will, in the minds of skeptics, at least, always remain on the side of defenders of the text’s authenticity.

More likely, though, I suspect things will remain how they are in the current discourse because “the Book of Mormon has not been universally considered by its critics as one of those books that must be read in order to have an opinion of it.”[10]

While this might be understandable, it is far from acceptable, and if scholars are going to be consistent in their judgements, and free themselves of double standards, then they must afford (Joseph) Smith the same courtesy they have afforded (Morton) Smith.

[1]: Morton Smith, Clement of Alexandria and a Secret Gospel of Mark (Cambridge: Harvard University Press, 1973); The Secret Gospel: The Discovery and Interpretation of the Secret Gospel according to Mark (New York: Harper & Row, 1973).

2 thoughts on “A Tale of Two Smiths”