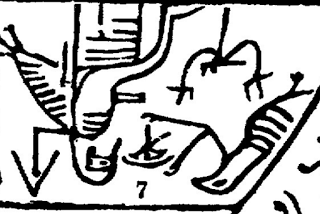 The Prophet Joseph Smith interpreted Figure 7 in Facsimile 2 as follows: “Represents God sitting upon his throne, revealing through the heavens the grand Key-words of the Priesthood; as, also, the sign of the Holy Ghost unto Abraham, in the form of a dove.”

The deity being represented in this figure is almost certainly Min (Mnw).[1] Min is one of Egypt’s oldest deities, having been worshipped as early as the Pre-Dynastic Period. Although Min had various attributes, he is best known as a fertility god, and was represented as a divine paragon of “male sexual potency.”[2] Common iconographic depictions of Min show him grasping an erect phallus (an obvious symbol of sexual potency, fertility, creation, procreation, rejuvenation, etc.) with his left hand and raising his right arm to the square (perhaps in a smiting pose) while holding a flail (a symbol of kingship).[3] Although rendered somewhat crudely in Facsimile 2, the elements of the erect phallus and the upraised arm with a flail are visible in Figure 7.

That Min would at once assume the roles of divine procreator who gives life and divine king who upholds the cosmos is understandable from the viewpoint of ancient Egyptian religion. As Ian Shaw explains,

Although Egyptian art shied away from depicting the sexual act, it had no such qualms about the depiction of the erect phallus. . . . The three oldest colossal religious statues in Egyptian history, found by Petrie in the earliest strata of the temple of Min at Koptos . . . where essentially large ithyphallic representations, probably of Min. . . . This celebration of the phallus appears to be directly related to the Egyptians’ concerns with the creation (and sustaining) of the universe, in which the king was thought to play a significant role – which was no doubt one of the reasons why the Egyptian state would have been concerned to ensure that the ithyphallic figures continued to be important elements in many cults.[4]

Christina Riggs similarly comments that “near naked goddesses, gods with erections, and cults for virile animals, like bulls, make sense in [ancient Egyptian] religious imagery because they captured the miracle of life creating new life.”[5] So too concludes Karel Van der Toorn, who observes that Min was “regarded as the creator god par excellence” in ancient Egypt, as fertility and (male) sexuality was “subsumed under the general notion of creativity.”[6] Min is not alone in this regard. Spell 527 from the Pyramid Texts explicitly links male sexuality with the creation of the cosmos (in this case the birth of Shu and Tefnut from the primordial creator god Atum): “Atum evolved growing ithyphallic, in Heliopolis. He put his penis in his grasp that he might make orgasm with it, and the two siblings were born–––Shu and Tefnut” (COS 1.3).

Little wonder then that another hypocephalus simply identifies Min as “the great god” in its own description of the deity.[7]

Naturally, this overt sexuality has horrified many of Joseph Smith’s more genteel sectarian enemies. Jerald and Sandra Tanner and James White, being the self-respecting Evangelical counter cultists that they are, voice their outrage that this crass pagan “pornography” hardly befits the God of the Bible.[8]

Ignoring for now that the God of the Bible actually is depicted as a sexual being (much to the discomfort of modern sectarians),[9] and that often breathtakingly explicit sexual language and imagery is used throughout the Hebrew Bible to describe God’s relationship with Israel,[10] the complaint that Joseph Smith’s reappropriation of this “pagan” sexual imagery somehow constitutes “pornography” ultimately says more about these critics’ attitude towards sex than it does about the propriety of sexuality in religious iconography.

(Oddly enough, I’m unaware of the Tanners or White being upset with barechested depictions of the Virgin, and have not seen them call nude depictions of Jesus on the cross “pornography.”)

But beyond mere polemics, what does the fact that the Prophet employed this sexual iconography in the Book of Abraham say about the Mormon attitude towards religious sexuality? After all, Latter-day Saint theology affirms not only an embodied God, but a sexual God (as much as we’d sometimes like to downplay this when talking with non-Mormons in ecumenical capacities). Joseph Smith’s Nauvoo-era revelations make it clear that exaltation in the Celestial Kingdom carries with it not only physicality (resurrection), but also a sexual dynamic (eternal marriage and “the continuation of seeds” [Doctrine and Covenants 132:19]).

With this in mind, I think one can feasibly see the ithyphallic Min in Facsimile 2 (“God sitting upon his thrine”) as, in fact, the exact opposite of pornography. Recall that pornography derives from the Greek πορνογράφος, or literally “writing of harlots,” which we might extrapolated broadly to mean writing or depictions that are unbecoming or unsuitable for those wishing to pursue a life of holiness. The opposite, then, of pornography would be what my friend and classicist David Delbar calls agathography (from the Greek ἀγαθός–––”good, noble”). Where pornography attempts to debase and profane the sacred nature of sexuality by commodifying it as just another cheap, exploitative thrill meant to sate the appetite of the natural man, agathography exalts, protects, and even celebrates sexuality as the ultimate telos of godliness.

Figure 7 of Facsimile 2 undeniably falls under this agathographic category. The point of this iconography is emphatically not to arose sexual passions (at least not in a profane way). Rather, this imagery is meant to draw the viewer’s attention towards the Divine (“God sitting upon his throne”) in sacred space (“revealing through the heavens the grand Key-words of the Priesthood,” i.e. the temple) by the aid of divine revelation (“as, also, the sign of the Holy Ghost unto Abraham, in the form of a dove”).[11] It is meant to enshrine sexuality as the ultimate divine Good (ἀγαθός). Again, sectarian prudes may object to this if they wish, but in so doing they reveal little more than their insecurity about sex, their theological squeamishness, and their selective reading of Scripture. (The last I checked, the duet of two lovers that drew heavily from Canaanite and Egyptian erotic love poetry known as the Song of Songs is still part of the biblical canon.)

We might cite additional examples, but this should sufficiently illustrate my point concerning agathography. Not only is this paradigm entirely consistent with Mormon (and biblical) theology, it also opens new hermeneutical pathways that prompt us to reconsider the radical (and beautiful) vision of the Prophet Joseph Smith concerning humanity and divinity.

[11]: Incidentally, there is something to be said about the presentation of the wḏȝt-eye of Horus to Min by the figure Nehebkau and Joseph Smith’s comment that this involves “the grand Key-words of the Priesthood.” Of course, wḏȝ in Egyptian carries the meaning of “hale, uninjured,” and “well-being.” Raymond O. Faulkner, A Concise Dictionary of Middle Egyptian (Oxford: Griffith Institute, 1962), 74–75. The wḏȝt-eye is the “whole” or “sound” eye of Horus and had an apotropaic function in Egyptian religion. The venerable Wörterbuch defines wḏȝ as “unversehrt sein” and “wohlbehalten sein,” and can be used to describe the wholeness, soundness, and health of the physical body (and the parts thereof), the soul, or, more abstractly, one’s moral character. Adolf Erman and Hermann Grapow, Wörterbuch der aegyptischen Sprache (Berlin: Akademie Verlag, 1958), I:399–400. With this in mind, consider the name of the second token of the Melchizedek Priesthood, as revealed to those who pass through the veil of the temple into the presence of the Lord. See the commentary in Nibley and Rhodes, One Eternal Round, 304–322.