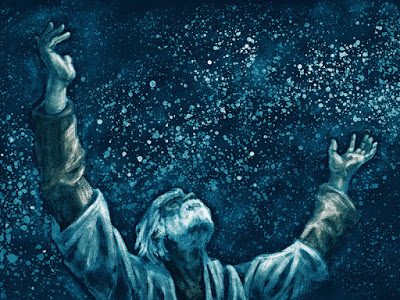 The Book of Abraham contains a number of hidden gems that you might miss if you read the text too quickly. Take Abraham’s vision of the cosmos and the divine council in Abraham 3. Most people remember this chapter for its vivid depiction of Kolob, a star “set nigh unto the throne of God” (Abraham 3:9). But a careful reading of the text reveals additional elements that add depth and sophistication to the account of Abraham’s stargazing.

For instance, a close reading of Abraham 3 uncovers a subtle Leitwort. Notice the emphasis on Abraham seeing the stars before him and how this is thematically linked with God seeing the spirits in the pre-mortal council.

And I saw the stars, that they were very great, and that one of them was nearest unto the throne of God; and there were many great ones which were near unto it. (v. 2)

The connection runs deeper than mere vocabulary, however. After seeing a tiered, hierarchical physical cosmos of planets and stars (vv. 1–17), Abraham is then showed a tiered, hierarchical spiritual cosmos of spirits and intelligences (vv. 19–28). A single axial verse effortlessly rotates the emphasis from a physical cosmos to a spiritual cosmos: “Howbeit that he made the greater star; as, also, if there be two spirits, and one shall be more intelligent than the other” (v. 18). Just as there are tiered stars and planets, with Kolob being the greatest and closest to the throne of God (v. 9), so too there are tiered spirit-intelligences, “[some] being more intelligent than the other” (v. 19), with one preeminent Intelligence being “like unto God” (v. 24).

But why might God show Abraham a vision of a geocentric cosmos only to then launch into a discussion of the pre-mortal council? The answer is seen right before the axial turn: “And the Lord said unto me: Abraham, I show these things unto thee before ye go into Egypt, that ye may declare all these words” (v. 15).

In other words, the Lord had intentions of commissioning Abraham to utilize his astronomy lessons for didactic purposes. This makes perfect sense from an ancient perspective. Unfortunately, we do not have the text of the Book of Abraham that narrates how Abraham taught the Egyptians astronomy, although we do have Facsimile 3, which illustrates such.

Furthermore, as John Gee pointed out back in 2009, there’s very likely a nice Egyptian pun being employed here. The Egyptian words for spirits/souls (ȝḫw) and both the non-circumpolar (ỉḫmw-wrḏ) and circumpolar (ỉḫmw-sk) stars are phonetically similar, and would’ve played nicely for Abraham’s Egyptian audience.  That is, Abraham was shown the never-setting circumpolar stars (ỉḫmw-sk) and then the pre-mortal spirits (ȝḫw), which “shall have no end . . . for they are gnolaum [Heb: ʿlm], or eternal” (v. 18).

(Another likely pun can be seen in the description that God “stood among those that were spirits [ȝḫw], and he saw that they were good [ȝḫt]” [v. 23].)

This repetition of Abraham seeing is not limited to the Book of Abraham. As summarized by Everett Fox, Genesis also utilizes the same Leitwort (“to see”; rʾh) in the Abraham narratives.

At the outset of Abraham’s journey to Canaan, which signals his entry into biblical tradition as an independent personality, God sends him off to a land that he will “let him see” (12:1). Arriving in the land, Abraham is granted a communication from God, expressed by the phrase “YHWH was seen by Avram . . .” (12:7). God subsequently promises the land to him and his descendants (“see from the place that you are . . . for all the land that you see, to you I give it and to your seed, for the ages” [13:15]). “Seeing” comes to the fore in the story of Abraham’s concubine Hagar; her encounter with God’s messenger ends with her addressing a “God of Seeing” (16:13). Further meetings between Abraham and God (17:1, 18:1) likewise express themselves visually, with the latter scene, where God announces Isaac’s impending birth at Abraham’s tent, almost unique in the Bible for its bold picture of God appearing directly to human beings.[1]

Little wonder that Martin Buber would afford Abraham the title of seer. “Abraham sees God with the eye of his action and so recognizes Him. . . . Abraham becomes a prophet, but a seer is what he was from the very first moment when God ‘let Himself be seen’.”[2]


And of course, all of this has been brought into focus by another “choice seer” (2 Nephi 3:7) that God has raised in the latter days.

1 thought on “Abraham the Seer”