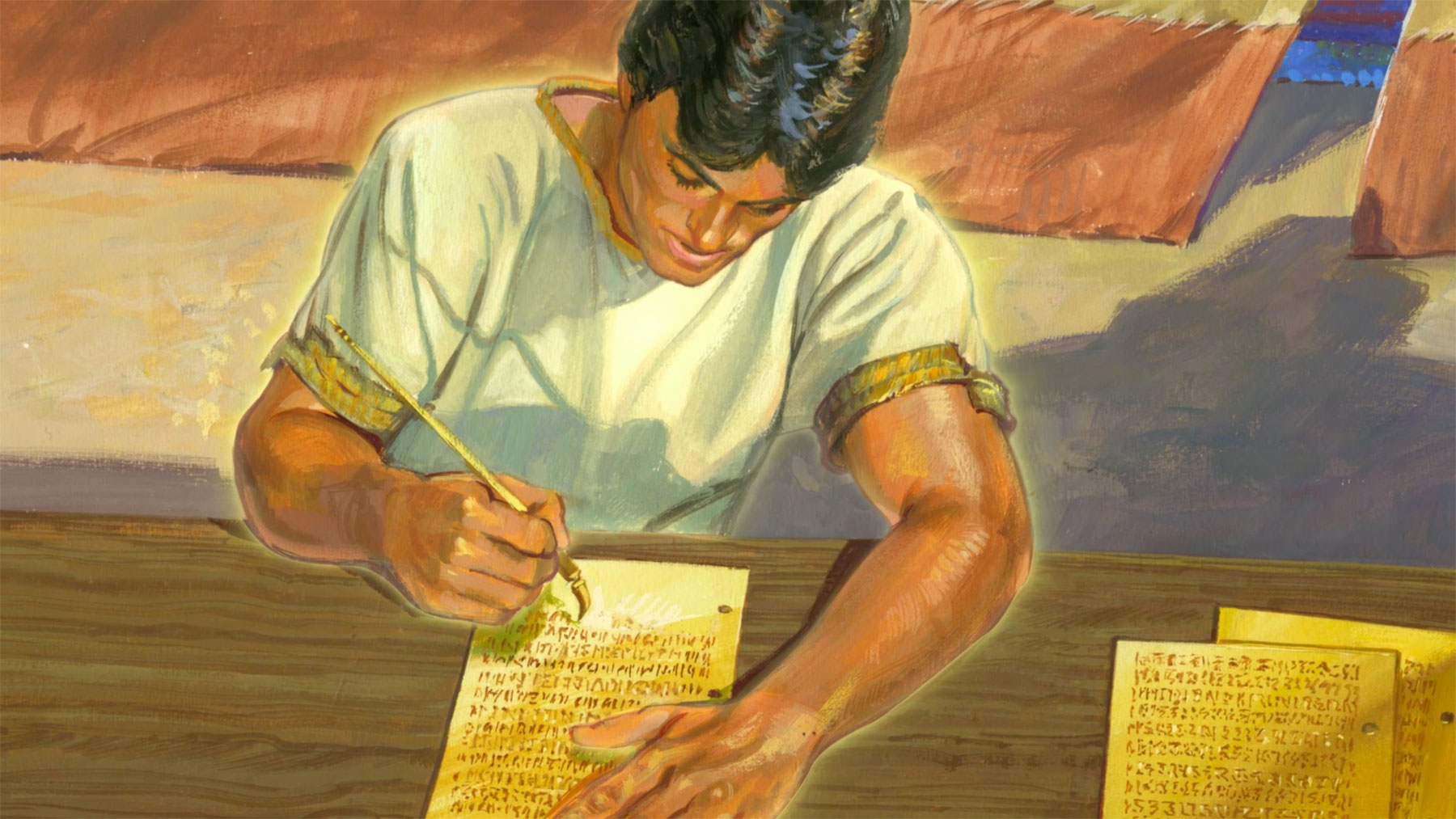 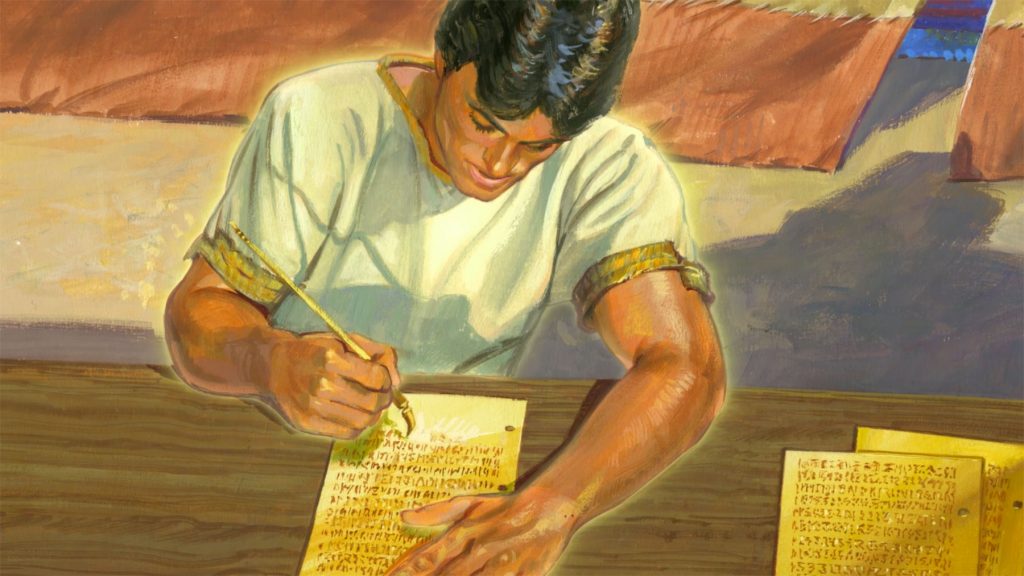 Two of the authors who contributed to the composition of the Book of Mormon, Nephi and Moroni, both claim at the end of their respective records that they will meet the reader of the book at the judgement bar of God and testify to him or her concerning the truthfulness of their writings and teachings.

Here is Nephi in the concluding verses of his record:

And now, my beloved brethren, and also Jew, and all ye ends of the earth, hearken unto these words and believe in Christ; and if ye believe not in these words believe in Christ. And if ye shall believe in Christ ye will believe in these words, for they are the words of Christ, and he hath given them unto me; and they teach all men that they should do good. And if they are not the words of Christ, judge ye—for Christ will show unto you, with power and great glory, that they are his words, at the last day; and you and I shall stand face to face before his bar; and ye shall know that I have been commanded of him to write these things, notwithstanding my weakness. (2 Nephi 33:10–11)

Concerning those who “will not partake of the goodness of God, and respect the words of the Jews, and also my words, and the words which shall proceed forth out of the mouth of the Lamb of God,” Nephi warned that “these words shall condemn you at the last day.” Nephi’s warning assumes, indeed takes for granted, that he really exists, that he will exist at the day of judgement, and that he will meet the reader and testify against them should they ignore his teachings. “For what I seal on earth, shall be brought against you at the judgment bar” (vv. 14–15).

Compare this with Moroni’s concluding remarks at the end of the Book of Mormon. “I exhort you to remember these things,” Moroni writes, “for the time speedily cometh that ye shall know that I lie not, for ye shall see me at the bar of God.” Not only that, but, Moroni adds, God himself will enter the picture and probe those facing Moroni with a pointed rhetorical question: “Did I not declare my words unto you, which were written by this man, like as one crying from the dead, yea, even as one speaking out of the dust?” Confronted by such irrefutable proof at the day of judgement, Moroni modestly concludes, “And [so] God shall show unto you, that that which I have written is true” (Moroni 10:26–29)

Once again, the rhetorical logic behind this passage is crystal clear: although the Book of Mormon will be met with skepticism and outright mockery (something Moroni anticipated [Ether 12:23–25]) by an incredulous latter-day audience, the authors of the book will have the last word at the day of judgement when the tables are turned and the derision of the unbeliever is replaced with the powerful testimony of these prophetic (and now deified) authors.

This is all fine and good from a Latter-day Saint theological and eschatological perspective. What struck me in my studies recently, however, is the fact that the Quran, the sacred book of revelation for adherents of Islam, makes a similar claim for itself. In Surah 4 (An-Nisâ’) of the Quran we encounter a portrait of Jesus (‘Îsa) as a messenger of God (Allah) who will stand as a witness at the day of judgement against unbelieving Jews who, on the one hand, reject Jesus as a prophet of Allah, and blasphemous Christians who, on the other, exalt him as the Son of God: “Yet, there is none among the People of the Book [i.e. Jews and Christians] but will believe in him before his death, and on the Resurrection Day he (Jesus) will bear witness over them” (4:159).

The testimony Jesus will give against blasphemers at the day of resurrection and judgement is that which is made plain in Allah’s revelation to Muhammad: that Jesus was mortal, not divine (3:59), that he was not crucified but instead was assumed by God “up to Himself” (4:157–158), and that Muhammad enjoys prophetic priority (61:6).

Logically speaking, the matter is not complicated: both the Quran and the Book of Mormon could be wrong (both of their respective sets of claims about the afterlife could be fraudulent), but both cannot be right. Someone is going to be standing at God’s judgement bar at the last day testifying about something, but it cannot be the Book of Mormon’s Nephi/Moroni and the Quran’s Jesus at the same time, since they will be testifying about doctrines that are fundamentally opposed to each other. (Need I quote the numerous passages in the Book of Mormon that affirm the divinity, crucifixion, and physical resurrection of Jesus, the Holy One of Israel, and the Son of God?)

Now this may be a small point, but it is one that reinforces the argument I have maintained for many years now: the historicity of the Book of Mormon (that is, the historical reality of the existence of the Nephites and their record-keeping prophets) is intrinsically tied to the authenticity and weight of its doctrinal and moral teachings. If Nephi and Moroni actually existed, and enjoyed prophetic inspiration to know what would transpire on the day of judgement, and wrote a sacred record (which was then delivered to the boy seer Joseph Smith to be translated by the gift and power of God) in part detailing such, then this immediately compels us to accept their testimony over the Quran’s concerning the eschatological role of Jesus at the day of judgement.

Of course, you don’t have to accept Book of Mormon historicity to live its teachings and precepts and accept its prophetic messages. I’m not just entirely sure why you would if you don’t, since the book’s theology, to say nothing of its eschatology, is premised on the assumption that the people it describes were and are real and will one day meet you face to face, making it clear once and for all “that that which [they] have written is true.”

1 thought on “The Book of Mormon, the Quran, and Eschatology: A Note on Historicity”