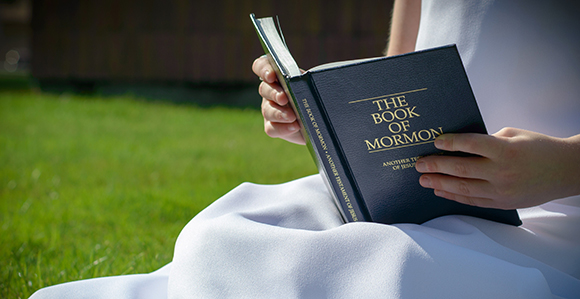 When asked by the New York Times to name a book that people might be surprised to discover on his bookshelf, the illustrious physicist and mathematician Freeman Dyson responded, “The Book of Mormon: Another Testament of Jesus Christ. . . . [T]he book tells a dramatic story in fine biblical style. The reader has to wait with growing tension almost until the end of the story to reach the final climax, when Jesus arrives in America and founds his second kingdom here.”1

Dyson is not the only non-Mormon to appreciate the Book of Mormon for its dramatic narrative, compelling characters, deep theological and doctrinal contributions, and rich literary quality. The contemporary literary scholar Grant Shreve, who holds a Ph.D. in American Literature from Johns Hopkins University, recounts, “When I first picked up the Book of Mormon in preparation for a dissertation on religion and the rise of the American novel, I didn’t expect to fall in love with it.” But fall in love with it he did, having what he described was “an aesthetic experience” reading a book he found comparable to Herman Melville and Harriet Beecher Stowe. Shreve observes a “recent embrace of the book by literature scholars,” and predicts that the Book of Mormon will continue to find positive academic exposure in courses on American literature.2

Finally, Laurie F. Maffly-Kipp, introducing the publication of the Penguin edition of the Book of Mormon (an act which canonizes the book as a “classic” of world literature, incidently), affirmed, “However one decides to think about this book, it is a fascinating tale well worth reading for a number of reasons.”3

These citations from prominent non-Mormon voices concerning the Book of Mormon, and others like them which could be multiplied, may, however, mislead an unsuspecting reader into believing that the book is worthy of any sort of genuine scrutiny or (God forbid) fair, evenhanded analysis free of prejudice or ideological partiality.4 In fact, whatever paltry merit the Book of Mormon may have to commend for itself, and whatever its pitiful apologetic defenders may insist otherwise, the simple fact is that the entirety of the Book of Mormon (a book of some nearly 270,000 words) can be easily distilled into one modest blog post. This is most fortuitous, given that the world these days, or at least the online world, demands complex issues and texts be crammed down to 300 characters or less. While I, alas, cannot abridge the Book of Mormon into 300 characters, what I can do is summarize the most (perhaps only) important parts, including those which are tremendously useful in any online comment section, Facebook rant, or meme.

I thus present, for the benefit and edification of busy people online who cannot reasonably be expected to read a complicated religious text with no trending hashtags, what I affectionally call the Reddit Abridgement of the Book of Mormon.

THE FIRST BOOK OF NEPHI
His Racism and Ministry

THE SECOND BOOK OF NEPHI

“. . . And he had caused the cursing to come upon them, yea, even a sore CURSING, because of their iniquity. For behold, they had hardened their hearts against him, that they had become like unto a flint; wherefore, as they were WHITE, and exceedingly FAIR and DELIGHTSOME, that they might not be enticing unto my people the Lord God did cause a SKIN OF BLACKNESS to come upon them . . . cursed . . . cursing . . . cursing . . . And now I, Nephi, write more of the 1769 KJV errors of Isaiah, for my soul delighteth in this smoking gun . . . white and delightsome.”

THE BOOK OF JACOB

“. . . Wherefore, my brethren, hear me, and hearken to the word of the Lord: For there shall not any man among you have save it be one wife, and concubines he shall have none; and please freak out because this contradicts D&C 132 and BTW did you know Joseph Smith married 14 year olds?!1!. . . . their skins shall be whiter than yours.”

THE BOOK OF ENOS

THE BOOK OF MOSIAH

“. . . And we began to till the ground, yea, even with all manner of seeds, with seeds of corn, and of wheat, and of barley. . . And now Abinadi said unto them: I would that ye should understand that God himself shall come down among the children of men, and shall redeem his people. And because he dwelleth in the flesh, he shall be called the Son of God, and having subjected the flesh to the will of the Father, BEING THE FATHER AND THE SON–the Father because he was conceived by the power of God, and the Son, because of the flesh; thus becoming the Father and the Sons–And THEY ARE ONE GOD, yea, the very Eternal Father of heaven and of earth. And thus the Book of Mormon did become subject to Joseph Smith’s earliest conception of God, which was classical Nicene Trinitarian . . . except for all those places where it isn’t. But there was one among them whose name was Alma, which we used to think was a Latin female name but then it was verified a century later as an authentic male Hebrew name that is paired with an appropriate wordplay in this verse so we have since had to shut up about this one, but we sure did have joy in our works for a season, . . . wine . . . and the people began to be very numerous, and began to scatter abroad upon the face of the earth, yea, on the north and on the south, on the east and on the west, which obviously means every last person on the entire American continent was either a Nephite or Lamanite and we should easily be able to find their DNA.”

THE BOOK OF ALMA

THE BOOK OF HELAMAN

THE BOOK OF NEPHI

FOURTH NEPHI
THE BOOK OF NEPHI

THE BOOK OF MORMON

“. . . COMOROS ISLANDS MAN I’M TELLIN’ Ya . . . And now, behold, we have written this record according to our knowledge, in the characters which are called among us the Reformed Egyptian™, so if 21st century scholars don’t know what this is when this book gets published then you have a green light to mercilessly deride anyone who believes it.”

THE BOOK OF ETHER

THE BOOK OF MORONI

“. . . And when ye shall receive these things, I would exhort you that ye would ask God, the Eternal Father, in the name of Christ, if these things are not true; and if ye shall ask with a sincere heart, with real intent, having faith in Christ, he will manifest the truth of it unto you, by the power of the Holy Ghost CONFIRMATION BIAS COGNITIVE DISSONANCE UNRELIABLE SUBJECTIVE FUZZY FEELINGS COGNITIVE DISSONANCE IT’S A MYTH CES LETTER!1!!”

[Postscript, January 31, 2018: The primary author of what I call the Reddit Abridgement of the Book of Mormon is my friend Tanner Johnson, who sent it to me a few weeks ago. He gave me permission to post it here on my blog. I made a few modifications, such as some additional jokes and the introductory paragraphs, and then posted it. Based on our conversation it sounded to me as if Tanner wanted to remain anonymous. This was a mistake, however, that I only realized upon re-reading our correspondences and talking again with Tanner. For that I apologize.]

5 thoughts on “The Book of Mormon (Abridged for Reddit)”