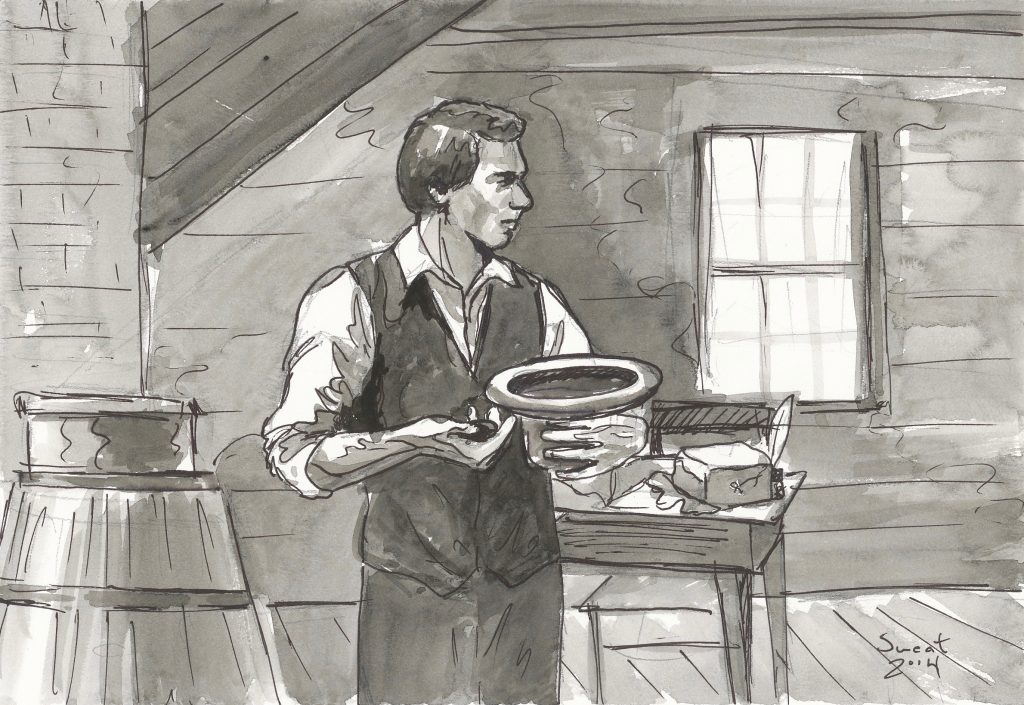 These claims have been repeated by the Stoddards elsewhere (here and here, for instance). The underlying assumption which appears to be guiding the Stoddards’ arguments is that seer stones are satanic, as is anything else related to the occult, and Joseph Smith, being a true prophet, would never engage in such behavior.

Joseph Smith never used a seer stone in the translation of the Book of Mormon.

This claim is easily refuted by even a cursory look at the surviving historical record. The history of Joseph Smith’s use of both the Nephite Interpreters and his personal seer stone in the translation of the Book of Mormon, as well as the provenance of Joseph’s seer stone(s), has been clearly delineated by Latter-day Saint historians.2 This history, once confined mostly to academic journals and monographs, has slowly made its way into mainstream and official Church narratives.3

Joseph Smith was never involved in any “occult” activities.

By “occult” what the Stoddards mean is what is otherwise called “folk magic” by historians. As with Joseph Smith’s use of seer stones, the Smith family’s involvement in folk magic has been abundantly documented.4 The question is not really whether Joseph Smith participated in this culture, but the extent to which he participated in it and what that might have meant to him and his early prophetic career.5 Contrary to the Stoddards’ assumption, early nineteenth century American folk magic was not seen as incompatible with authentic Christian religion by practitioners.6 Joseph Smith did downplay his involvement in folk magic later in his life, most likely in an attempt to quiet pervasive anti-Mormon accusations of indolence and deceit, but he never outright denied such.7 The Stoddards might be scandalized by the idea that Joseph Smith ever practiced money digging and related “magical” activities, but Joseph Smith himself wasn’t.

Claims that Joseph Smith ever used a seer stone in the translation of the Book of Mormon or was ever involved with folk magic come exclusively from anti-Mormons or apostate dissidents and are therefore untrustworthy.

[Martin Harris] also stated that the Prophet translated a portion of the Book of Mormon, with the seer stone in his possession. The stone was placed in a hat that was used for that purpose, and with the aid of this seer stone the Prophet would read sentence by sentence as Martin wrote, and if he made any mistake the sentence would remain before the Prophet until corrected, when another sentence would appear. When they became weary, as it was confining work to translate from the plates of gold, they would go down to the river and throw stones into the water for exercise. Martin on one occasion picked up a stone resembling the one with which they were translating, and on resuming their work Martin placed the false stone in the hat. He said that the Prophet looked quietly for a long time, when he raised his head and said: “Martin, what on earth is the matter, all is dark as Egypt.” Martin smiled and the seer discovered that the wrong stone was placed in the hat. When he asked Martin why he had done so he replied, to stop the mouths of fools who had declared that the Prophet knew by heart all that he told him to write, and did not see by the seer stone; when the true stone was placed in the hat, the translation was resumed, as usual.8

Now, the first part my husband translated, was translated by the use of Urim and Thummim, and that was the part that Martin Harris lost After that he used a small stone, not exactly black, but was rather a dark color.9

I know Mormonism to be the truth; and believe the Church to have been established by divine direction. I have complete faith in it. In writing for your father I frequently wrote day after day, often sitting at the table close by him, he sitting with his face buried in his hat, with the stone in it, and dictating hour after hour with nothing between us.10

As with Joseph Smith’s involvement with folk magic, the issue at hand isn’t whether the Prophet ever used a seer stone, but when he used it, how he used it, and how to parse the terminology (“stone[s],” “spectacles,” “Urim and Thummim,” etc.) used in the historical sources, since this terminology is sometimes conflated in later recollections. Contrary to what the Stoddards claimed in their FIRM Foundation presentation, this is not a matter of historians just blindly believing whatever fits their revisionist theories, but applying the tools of critical historical scholarship to make sense of the surviving data.

What the Stoddards are really fearful of here is credible historical scholarship which challenges their fundamentalist beliefs. Because the Stoddards cannot countenance the idea that Joseph Smith was involved with the “occult,” or that Joseph Fielding Smith was mistaken in his outdated assessment of the history of the translation of the Book of Mormon, they are desperate to discount any new scholarship which contributes to their cognitive dissonance. But because they cannot refute the careful scholarship of professional historians, they instead seek to pathologize it. Hence their solemn warning during their FIRM Foundation presentation that narratives about the translation of the Book of Mormon which include talk of seer stones will confuse and demoralize the youth of the Church, and ultimately cause them to doubt their testimonies. But this is mere alarmist rhetoric, and does not actually address the issue at hand.

Latter-day Saint leaders who allow historians to publish narratives which include Joseph Smith using seer stones in official Church publications are victims of manipulation and potentially even outright fraud on the part of these historians, not unlike those Church leaders who were deceived by the forger Mark Hoffmann.

In order to explain how it is that seer stones are being incorporated into the official historical narrative of the Church, the Stoddards have promoted conspiracy theories about a sort of deep state of dangerous intellectuals within the Church who are, effectively, pulling the wool over the prophets’ eyes. We shouldn’t blame or criticize the current prophets who erroneously allow talk of seer stones get mainstream traction, the Stoddards clarify, because they just don’t know any better. And besides, prophets (except, it seems, besides Joseph Fielding Smith) aren’t infallible, so they’re allowed mortal failings like the rest of us. Failings like not being able to detect a cabal of rogue historians leading the youth of the Church astray with claims that Joseph Smith used seer stones and practiced folk magic, evidently.

In other words, to put a fine point on it, the Stoddards are seriously suggesting that when Elder Quentin L. Cook of the Quorum of the Twelve Apostles sat two feet away from Dr. Kate Holbrook in last month’s Worldwide Devotional for Young Adults as she went on in detail about how the translation of the Book of Mormon involved a seer stone, he was oblivious to the truth, and Dr. Holbrook is either a naive useful idiot or nefarious agent of this deep state.

The Stoddards are also seriously suggesting that the collective discernment of the First Presidency is so faulty that when it endorsed the first volume of Saints: The Story of the Church of Jesus Christ in the Latter Days, an official Church history which explicitly describes Joseph Smith’s use of a seer stone, it was unaware of the apostate schemes brewing right under its nose in the Church History Department.

This may rightly seem absurd to most, but I observed plenty of anxious audience members at the FIRM Foundation conference who nervously groaned when they heard about the irresponsibility of the “intellectuals” (a pejorative used freely throughout not just the Stoddards’ presentation, but other presentations at the conference as well) at the Church History Department. Rod Meldrum himself, after the Stoddards spoke, took the stand and lamented that seer stones had made their way into historical site guides for missionaries and institute and seminary curricula.

Rest assured, dear reader, that the good men and women at the Church History Department are not party to a nefarious conspiracy to undermine the Brethren or confuse you about Joseph Smith and early Latter-day Saint history. They are, rather, honestly attempting to communicate what we know about early Church history from surviving sources in a way that is both academically responsible and faith affirming.

9 thoughts on “Yes, Joseph Smith Really Did Use a Seer Stone in the Translation of the Book of Mormon”