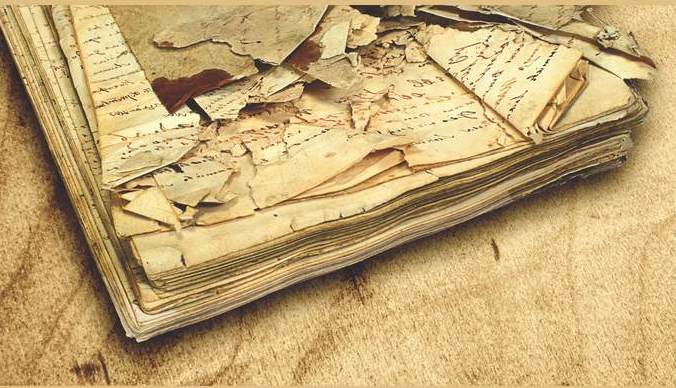 “For Latter-day Saints,” Bradley begins, “the Book of Mormon’s ‘lost 116 pages’ have taken on a kind of mythical status, as if everybody knows part of the Book of Mormon is missing, but nobody knows what was in it. The surrounding mythos has spawned its own narrative of heroes and villains, with Martin Harris’s wife Lucy being cast in the role of villain (or, for opponents of the faith, hero) for purportedly taking the manuscript and destroying it” (p. ix). What Bradley hopes to accomplish in part is to demythologize the history of the loss of the 116 pages with the latest scholarly tools and available evidence. An archival or documentary bloodhound himself who has a keen eye for detail in historical sources,4 Bradley is eminently qualified to undertake this daunting task. Additionally, Bradley hopes to use the tools of source criticism to plausibly reconstruct what he postulates was likely contained in the 116 pages. “The Book of Mormon’s lost pages are not the first notable historical manuscript to go missing, and I am not the first scholar to attempt to reconstruct a missing text,” Bradley remarks. “The work of reconstructing lost texts has a long and venerable history. Scholars have many times attempted to map out missing portions of an ancient manuscript or extrapolate the overall plot of an ancient narrative from its surviving fragments or reflections in later texts. Such problems are confronted by scholars in a range of historical disciplines” (p. x). It is therefore entirely appropriate for Bradley (or anyone else) to take a stab at reconstructing what was in the lost 116 pages while acknowledging (as Bradley wisely does) that “all historical reconstruction is probabilistic, and some facets of the past [or texts] can be reconstructed with greater certainty than others” (p. xiii).

Part 1 of The Lost 116 Pages (chapters 1–5), “consists of a history of the lost pages” and narrates “the coming forth of the Book of Mormon, telling the familiar story in an unfamiliar way in order to introduce background material needed to make sense of the lost manuscript’s translation (Chapter 3) and theft (Chapter 4).” Part 1 also details what can be said about “the physical manuscript itself, including an assessment of how much material it contained, arguing that this is more than has been assumed” (p. xv). Most of this portion of Bradley’s book will certainly be familiar to seasoned readers of early Latter-day Saint history. This is not to say that Bradley is merely rehashing previous work in this part of his book, however. On the contrary, Bradley provides fresh and deeply interesting insights into what we already know about the translation of the Book of Mormon, such as how Joseph Smith’s use of the breastplate and Urim and Thummim in the translation process mirrored or echoed the high priest of ancient Israel in his capacity as a mediator of God’s presence before Israel (pp. 51–56). What’s more, chapter 4 provides what is perhaps the best overview and analysis of the suspects behind the loss of the 116 pages. This chapter reads like something out of a whodunit mystery novel (in the best possible way) and details what we know about the circumstances behind the manuscript’s theft, the crime itself, and the suspects. Bradley narrows down three named suspects (Lucy Harris, Flanders Dyke, and Samuel Lawrence) and unnamed members of Palmyra’s local gang of money diggers as the most likely culprits (pp. 64–81). Without “spoiling” the mystery (you’ll have to buy the book!) I will say that Bradley’s argument for who among these suspects is most likely guilty for the theft of the manuscript is persuasive. 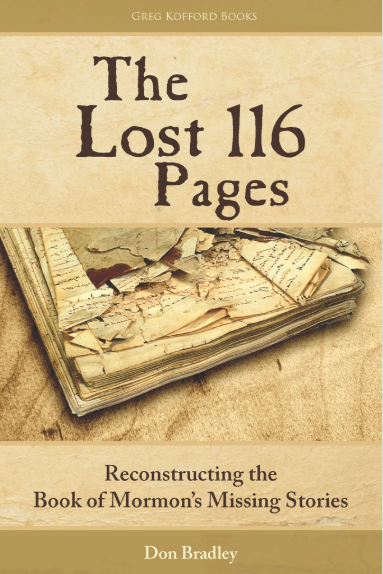 The one chapter that I found the least persuasive (chapter 5) was the chapter detailing Bradley’s argument for the length of the lost manuscript (esp. pp. 84–96). As Bradley argues, “The Book of Mormon’s internal evidence shows that the lost manuscript began with Lehi, and then covered the ensuing four and a half centuries, into the reign of King Benjamin—the same time period covered by the small plates account that replaces it” (p. 85). Because of this, and based on other factors, Bradley reasons that the amount of lost content is close to 300 pages as opposed to 116 pages (p. 96)! I can’t really articulate a coherent counterargument at this precise moment, and so will not attempt to refute or contradict Bradley’s position in any meaningful or rigorous way other than to say this strikes me on first impression as a wholly incongruous with what I assume would have been physically possible to record on the plates given their attested physical dimension.5 Still, Bradley’s position is worth carefully considering, and perhaps future studies will either reinforce or diminish the likelihood of his estimate.

Part 2 of his book (chapters 6–15) “consists of [Bradley’s] reconstruction of the history in the lost pages—its missing stories” (p. xv). The first chapter (chapter 6) in this section details Bradley’s methodology in reconstructing the lost pages, while the rest dive into the details of what Bradley thinks was most likely contained in the lost pages. This reconstruction relies primarily on two strands of evidence: the testimony of those who either themselves were privy to the content of the lost pages or who heard of this content from those who had firsthand knowledge, and clues in the pages of the extant Book of Mormon. This latter category seems like the most obvious place to turn in any attempted reconstruction of the contents of the lost pages. For example, as Bradley describes in detail (pp. 221–240) the Book of Mormon figure Aminadi. First mentioned in Alma 10 as “that same Aminadi” who interpreted the writing on the wall of the temple, it seems clear that “that the story was a familiar one and that Aminadi was a man of stature in Nephite history” (p. 223). But there is no mention to either Aminadi or the episode of his interpreting the writing on the wall of the temple in the extant Book of Mormon text. As Bradley explains, the most likely answer is that “the story of Aminadi interpreting the writing on the wall . . . would have been included in the comprehensive large plates of Nephi, of which the lost manuscript was an abridgment. . . . [G]iven that Mormon was writing for an audience whose only knowledge of the Nephites would be through his book, he could only assume the reader’s familiarity with the story if he had included it earlier in his record. Mormon’s quotation of Amulek’s cryptic allusion to Aminadi without further explanation thus attests that he had included the fuller story in the early, lost portion of his abridgment” (pp. 233–234).

While I found some of Bradley’s proposed reconstructions of the content of the lost pages more plausible than others (I found his proposed background for the sword of Laban [pp. 140–142, 176–177] somewhat tenuous), the overall trajectory of Bradley’s reconstructed narrative contained in the lost pages strikes me as more or less believable; and what’s more, in some instances downright fascinating and even exciting. Bradley’s proposition that the missing portion of Mormon’s abridgment of the large plates of Nephi featured a number of Exodus and Passover motifs in its narrative (pp. 121-192, 249-273), for instance, comes across as highly credible, given that other careful readers of the extant Book of Mormon text have picked up on similar themes,6 and amply reinforces what Bradley has very rightly noted is the overall Hebraicity, as it were, of the text (pp. 285–286). I likewise found Bradley’s discussion on the prominent role the temple and temple imagery likely played in the missing portion fascinating and, once again, very persuasive (pp. passim, but esp. 193–208, 286–287).

The conclusions Bradley draws from his study are enumerated in his final chapter (pp. 285–292), and a few are worth mentioning here. First, Bradley concludes that “one of the most striking and startling things about both the coming forth and the content of the Book of Mormon’s lost text is how Hebraic, and even specifically Jewish, they were” (p. 285). This, he says, comes as something of a surprise, and subverts naturalistic expectations that the Book of Mormon is a nineteenth-century Protestant book, since “the contents of the lost pages . . . entirely buck scholarly expectation that the Book of Mormon will behave as a New Testament-focused, nineteenth-century Christian primitivist text” (p. 286). Second, Bradley concludes that temple worship, as just mentioned, played a central role in the structure of and motifs contained in the lost pages. “Given that the Book of Mormon was so Judaic, it is not surprising that Jewish temple worship would be prominent in its pages,” Bradley writes. “And that is indeed not the truly striking thing. What is striking is that through the lens of the lost pages we see that not only was temple worship characteristic of biblical Jews prominent in the Book of Mormon’s lost pages, so was temple worship as recognizable to Latter-day Saints” (pp. 286–287, emphasis in original). This point is worth more fully exploring, and Bradley provides plentiful examples that future researchers could easily build on. Finally, Bradley marvels at how the lost portion of the Book of Mormon appeared to contain, as it were, several elements of “High Mormonism” of the Nauvoo-era. “An idea exists for many . . . that the most distinctive doctrines of the Restoration are not in the Book of Mormon,” Bradley notes. “This is sometimes expressed by critics of the Restoration in quips that ‘there is not much Mormonism in the Book of Mormon.’ Delving deeply into the Book of Mormon’s clues about what was in its lost pages straightforwardly refutes this” and forced even Bradley himself to reexamine his own once-held assumption that there wasn’t much distinctly “Mormon” in the Book of Mormon (p. 287). As Bradley elaborates,

The Restoration of the Gospel of Jesus Christ in its full bloom—what has been called “Nauvoo Mormonism”—is original and literal “Mormonism”; it is the very faith propounded by Mormon in his book, beginning in its lost pages with the first words of written revelation given to Joseph Smith. This is not only evident in what we can know of the lost text. Rather, in light of such findings about Mormon’s lost abridgment, we can better understand what it is in Mormon’s available abridgment—neither of which was meant to stand alone; each was part of a larger whole. (p. 287)

While I may have my own disagreements with Bradley over some matters pertaining to this subject, and while I find some of his arguments more persuasive than others, I cannot deny that Bradley has offered an undoubtedly important contribution to the scholarly study of the Book of Mormon and the early events of the Restoration. There can be no question that anybody wanting to discuss the history of the loss of the 116 pages and the likely content of those pages in any serious or relevant manner must engage with Bradley’s pioneering work. This is just as true for those who consider the Book of Mormon to be a work of nineteenth-century frontier fiction as for those who accept it as a translation of an ancient text. Simply put, despite whatever points of weakness or doubtfulness one might find in Bradley’s work, The Lost 116 Pages has firmly secured for itself a place in the contemporary canon of Latter-day Saint historiography and scriptural studies.