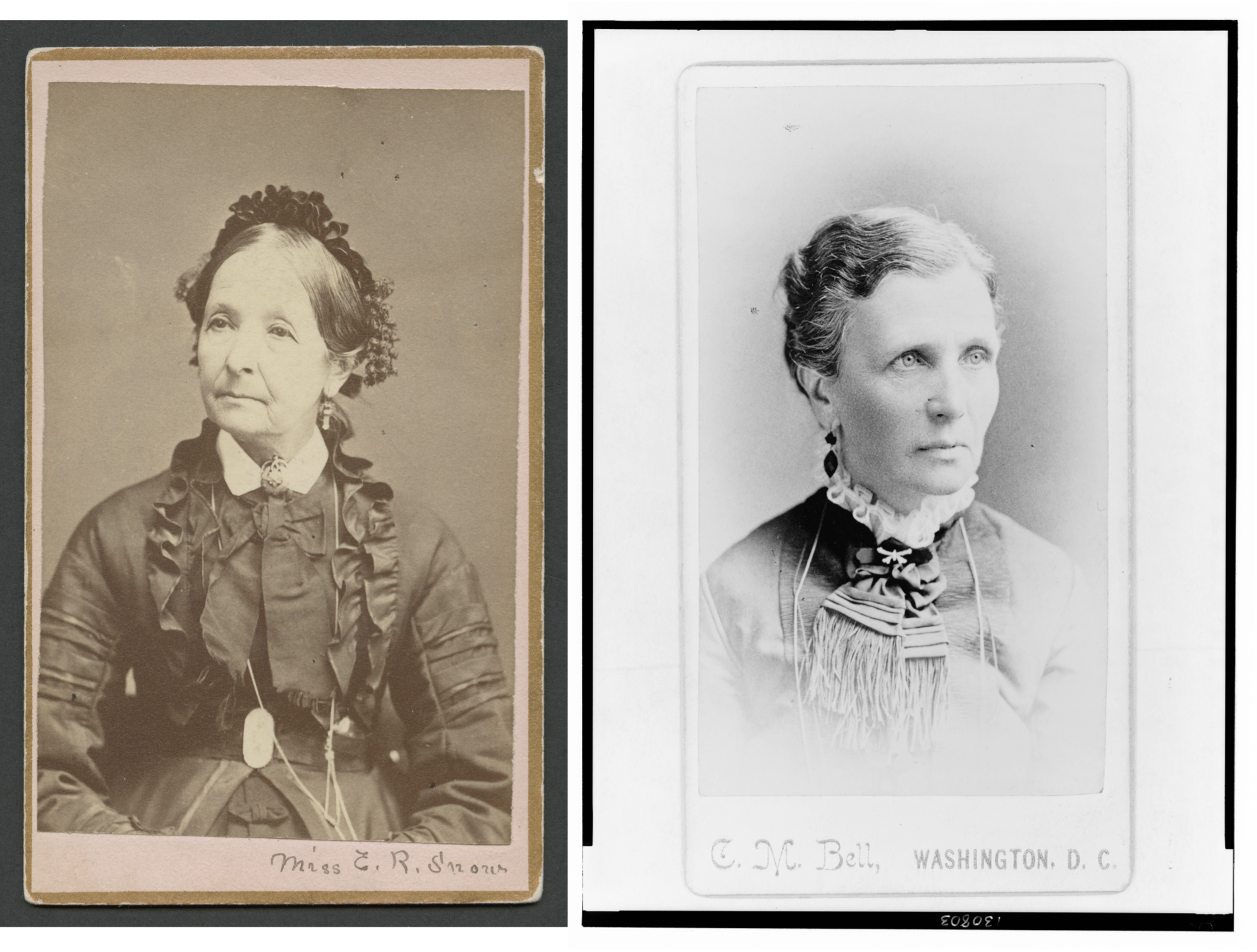 Eliza R. Snow was the second general president of the Relief Society; Emmeline B. Wells was its fifth. Both women led and built the Church in significant ways, articulated its doctrine, and influenced society and culture. Their words inspired their Latter-day Saint contemporaries and continue to provide moving testimonies of Jesus Christ and his gospel today.

Historians on the Eliza R. Snow project combed through hundreds of sources, such as handwritten minute books and nineteenth-century newspapers, to find and compile Snow’s words. Work on the Emmeline B. Wells diaries began almost twenty years ago at Brigham Young University when historians and editors Cherry Bushman Silver and Sheree Maxwell Bench began painstakingly transcribing and annotating thousands of diary entries in the forty-seven extant volumes Wells recorded between 1844 and 1920.

Together, these documents are a rich resource for anyone interested in women’s leadership, American religious history, Utah history, the woman’s suffrage movement, and the growth of The Church of Jesus Christ of Latter-day Saints.

As is to be expected with the high-calibre work of the Church History Department and the Church Historian’s Press, the online version of these documents is accompanied by historical introductions, a chronology, photographs, and biographical information about people mentioned in the sources. These publications and the accompanying contextual material can be used professionally and personally for research, lessons, and individual study.

As explained in the media brief, Eliza and Emmeline each “left a compelling record of her teachings and service—Snow in the form of discourses, and Wells in the form of diaries. Their leadership helped the Church grow spiritually and temporally from the pioneer period into the modern era. Their teachings, experiences, and wisdom remain relevant today, and these projects have made those sources easily accessible to all.” This is not, however, the first time the Church Historian’s Press has released important documents related to Latter-day Saint women’s history. The First Fifty Years of Relief Society and At the Pulpit: 185 Years of Discourses by Latter-day Saint Women are also indispensable resources for those wishing to dive deep into this subject. The voices of a variety of Latter-day Saint women besides Eliza and Emmeline are preserved in these compilations.

Below are selections from Eliza’s and Emmeline’s records reproduced in the media brief for last week’s launch event.

(Note: The following quotations were recorded by secretaries as Snow spoke. They are presented here as they are found in the original records.)

“Our calling is great & noble. We are called not only to work, but to instruct, counsil & console. The mind needs food as much as the body—indeed must have it, or it will dry, wither & perish.” (26 May 1868)

“Seek to understand the workings of the Spirit of God for it is not Trouble Greif and sadness that it Bringeth, but peace, Joy and sattesfaction.” (27 October 1869)

“We live in a day of revelation, and it is our privilege to know the mind and will of our Father, and we need not be in the dark; for there are ways by which we can be instructed. We have God’s Spirit and agency at our head; there is a way appointed by which we may know the law and will of God.” (25 June 1870)

“There are Places for A Mother to shine outside her Home[. T]his Society has a great Scope of Labor, not only in Patching quilts.” (26 September 1872)

“You can become with all the privaleges you have the wisest, and most noted women of the earth. You will increase in intelligence, you will increas in politeness & you will increse in every thing that is good, and you will become as polished stones.” (4 December 1873)

“In this Church and Kingdom there was no such thing as dividing the interests of Man & Woman that they were identical that they are coworkers in this Church for the building up of the same and strengthening of each other.” (16 September 1874)

“The Sisters have weighty duties placed upon them, and duties that cannot be accomplished singly, but require a unity of heart and feeling, we must be united as Jesus and his desciples were, and must get the holy ghost the comforter that Jesus, spoke of to help us.” (26 September 1877)

“The Spirit of God never dwells with a grumbler. we must keep in mind that we are the daughters of God and not give way to such a spirit.” (25 October 1877)

“We should try and acknowledge the hand of God in all things[.] I know that God is pleased with the daughters of Zion when they improve their time and opportunity in bearing a faithfull testimony to his work.” (14 September 1880)

“From far-off Salt Lake City comes Mrs. Emeline B. Wells, a smiling, demure, and well-bred woman. Nevertheless she is one of the crack debaters of the Council. She brings to the task an inexhaustible memory, a neat delivery, and a perfect self-possession. She is a royal enthusiast who has devoted her life to woman’s enfranchisement.” (Margherita A. Hamm, “The National Council of Women,” Peterson’s Magazine, May 1895, 5:499.)

“May Anderson paid me a great compliment which I shall never forget. … Do you know what I think of you—I think you are far and away the most wonderful woman there has ever been in this Church.” (Diary, 15 April 1908.)

Why she enjoyed the national meetings

EXCERPTS FROM THE WELLS DIARIES

Connection with the Woman’s Exponent. Wells began writing articles as Blanche Beechwood and was made assistant editor at first, then she was made editor in 1877. The Woman’s Exponent remained her paper for thirty-seven years. She accepted Brigham Young’s commission to tell the story of women by publishing dozens of biographical sketches and obituaries. Her diaries record beginnings of her newspaper career.

“Belle and Em. were indignant with me for working in the Office, as if I had to earn my living; it seems out-of-place to them, but I am anxious to acquire a thorough knowledge of an Editor’s duties.” (Diary, 24 March 1875.)

“In the morning I was busy seeing after some business matters pertaining to the office, and in the afternoon we had an excellent meeting, Sister Snow was present my husband seemed proud of my literary acquirements for once in his life called to me as I was passing and spoke to Br. [George Q.] Cannon of my being a journalist.” (Diary, 3 June 1875.)

Politics and public life. Wells became a spokeswoman for Latter-day Saint positions across the county for several decades.

“I am pleased however to have the opportunity to travel and speak in the interest of Zion and feel how blest I have been and the truth of the prophecy of Bishop Whitney upon me, when he said I should have nothing to do but to devote my whole time to writing and to literary pursuits, and that I should sit and eat and drink and converse with the nobles of the earth and tell them of the Gospel.” (Diary, 13 June 1888.)

“I have desired with all my heart to do those things that would advance women in moral and spiritual as well as educational work and tend to the rolling on of the work of God upon the earth.” (Diary, 1 August 1895.)

“I have received a letter from Aunt Zina in which she addresses me as the Cor. Sec. of the Relief Society everywhere in all its branches. Evidently my work will be more extensive in the future than it has been. Responsibilities come thick and fast upon the women of Zion. Those who will must take up the burdens and carry them.” (Diary, 12 June 1888.)

Women’s rights. Wells served on executive boards for the National Woman Suffrage Association, the National Council of Women, and the National Woman’s Press Association. She led several Utah women’s activities at the Columbia Exposition in Chicago in 1893. She was a personal friend of Susan B. Anthony, Clara Barton, Charlotte Perkins Gilman, and others.

At the Congress of Women, Columbian Exposition, Chicago: “This morning I presided over the General Congress in the Hall of Columbus—an honor never before accorded to a Mormon woman—if one of our brethren had such a distinguished honor conferred upon them it would have been heralded the country over and thought a great achievement. I succeeded very well.” (Diary, 20 May 1893.)

Political activism. Wells headed the Utah Territorial Woman Suffrage Association. She attended conventions, lobbied the legislature, helped expand the Republican Party among women in the 1890s, campaigned for woman’s suffrage in the new state constitution, ran for state office herself—and she recorded what success felt like.

“The morning papers say Hebe [Heber Manning Wells as governor] is elected . . . but what seems most propitious is that the Constitution is carried by a large majority and gives us equal suffrage—no distinction on account of sex. It is a source of gratification to women here and elsewhere— we sent off the Ballot Box to Mrs. Elizabeth Cady Stanton today—for her 80th. anniversary—it is made of Utah onyx and trimmed with silver engraved with her name and date Nov. 12. ’95 and Presented by Utah Women I am writing the letter to accompany it—which is an undertaking.” (Diary, 6 November 1895.)