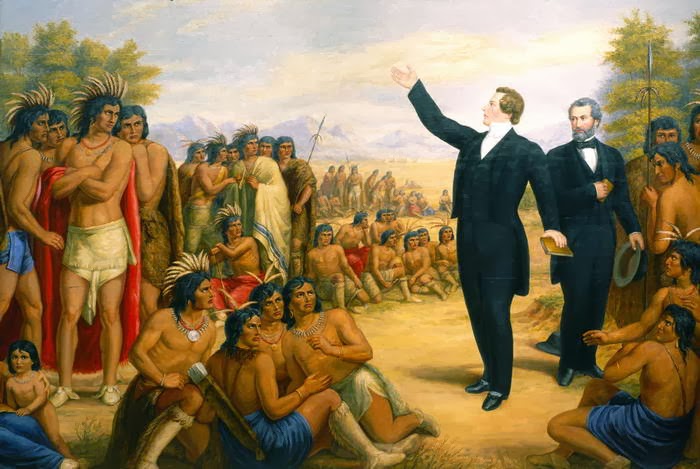 Some of the responses to the Church’s recent essay on DNA and the Book of Mormon have been rather perplexing. (The responses of certain prominent critics of the Church, who shall, for their sakes, remain nameless, were downright embarrassing.) One of the responses I’ve heard is the complaint that the essay leaves unaddressed the issue of the Doctrine and Covenants identifying Native Americans in Joseph Smith’s time as “Lamanites” (e.g. D&C 19:27; 28:8–9, 14; 30:6; 32:2; 49:24; 54:8; for more on this topic, see here.)

I don’t understand why this criticism keeps being rehashed, since it was addressed in an article published over a decade ago.

Lehi saw from the beginning that Nephites and Lamanites were labels that would include a variety of groups that could have differing biological origins, cultures, and ethnic heritages. According to the title page of the Book of Mormon, the generic term Lamanite was applied by Moroni to all the amalgamated groups whose descendants would survive right down to Restoration times as “the [American] remnant of the house of Israel.” There is no indication anywhere in the Book of Mormon that “the Lamanites” were to be a genetically exclusive line descending only from the two oldest sons in Lehi’s family.

Lest anyone think this is some kind of ad hoc redefinition of the word “Lamanite” to save the Book of Mormon from DNA evidence that supposedly condemns it, I would remind the reader that Hugh Nibley and John L. Sorenson were saying the same thing back before DNA was even an issue. (See Hugh Nibley, Since Cumorah, 2nd ed. [Provo, Utah: FARMS, 1981], 213–220; John L. Sorenson, An Ancient American Setting for the Book of Mormon [Provo, Utah: FARMS, 1985], 54–56. See also John A. Tvedtnes, “Reinventing the Book of Mormon,” FARMS Review 16/2 [2004]: 91–106; link here.)

You can read more about this and other topics related to DNA and the Book of Mormon here.