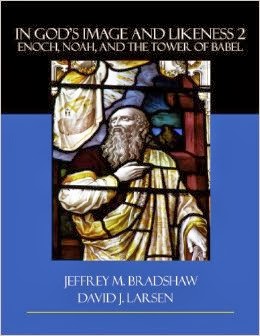 However, Bradshaw’s first book only covered up to Moses 6. So then what about the rest of the Book of Moses, including the accounts of Enoch and Noah? With David J. Larsen as a co-author, Bradshaw has now completed his commentary on the Book of Moses with In God’s Image and Likeness 2: Enoch, Noah, and the Tower of Babel, co-published by the Interpreter Foundation and Eborn Books.

If one could summarize the purpose of this sequel, it would have to be that Bradshaw and Larsen are “taking the stories of the primeval history seriously” (p. 4) and attempting to show the richness, beauty, and power of these accounts.

Given their status as targets of humor and caricature, the well-worn stories of Adam, Eve, and Noah are sometimes difficult to take seriously. However, a thoughtful examination of the scriptural record of these characters will reveal not simply tales of “piety or inspiring adventures” but rather carefully crafted narratives from a highly sophisticated culture that preserve “deep memories” of revealed understanding. We do an injustice both to these marvelous records and to ourselves when we fail to pursue an appreciation of scripture beyond the initial level of cartoon cut-outs inculcated upon the minds of young children. (pp. 4–5, internal notes removed)

After their discussion of Enoch, Bradshaw and Larsen then comment on Noah, the ark, and the flood. They discuss the events preceding and following the flood, in addition to the flood itself. Besides doctrinal discussions, their commentary on the flood also tactfully includes a brief discussion of how to reconcile the flood account with evidence from geological science that strongly contradicts belief in a global catastrophic flood. Instead, Bradshaw and Larsen posit the likelihood of a local flood that was possibly mythologized in the Genesis account to carry specific theological significance and symbolism (esp. pp. 267–271). This symbolism is actually quite interesting, as Bradshaw and Larsen point out that the Genesis flood symbolically throws the earth back into its pre-created chaotic state, when the waters of chaos reigned before the formation of the earth (see Genesis 1:1–3; cf. Abraham 4:1–2). With the emergence of a new earth from out of the waters of the flood, the account presents Noah as a type of Adam (pp. 256–259, 267, 277–279).

Of course, as might be expected in a tome covering the Book of Moses and Genesis, Bradshaw and Larsen make no small effort to draw our attention to the many links between these stories and the temple. There are simply too many wonderful insights concerning the temple in this book for me to fully describe in this review. Suffice it to say that nobody can walk away from reading this book without coming to more fully appreciate the importance and centrality of the temple and temple symbolism in the scriptures, including in the stories of Enoch, Noah, and the Tower of Babel.

In addition to their commentary on the text, Bradshaw and Larsen include what they term “Gleanings,” or reproductions of quotes by various General Authorities or scholars on topics relating to the subject being discussed in each chapter. Bradshaw and Larsen also provide numerous paintings, photos, and charts to help the reader visualize the stories they’re reading. In this regard, In God’s Image and Likeness 2 follows in the steps of its predecessor, which also stands out for its wonderful artistic reproductions.

There wasn’t much that I found in this book to criticize, and there was only one part that I really disagreed with. In their commentary on the story involving Noah and his sons in Genesis 9, Bradshaw and Larsen speculate that Noah didn’t actually get drunk from the wine that he made from a vineyard he had planted (Genesis 9:20–21), but had participated in “a ritual drinking of wine” that preceded a vision (p. 300). They base this argument on a statement attributed to Joseph Smith and an excerpt from the Genesis Apocryphon. The evidence presented by Bradshaw and Larsen is, however, tenuous. First, the statement attributed to Joseph Smith that Noah “was not drunk, but in a vision” is late and thirdhand.[4] A contemporary (and preferably firsthand) statement on this by the Prophet would be stronger evidence for their claim. Second, their appeal to the Genesis Apocryphon, while interesting, doesn’t do much to mitigate against the plain reading of the text in Genesis–––Noah got a little too carried away with his wine. It would seem that the author of the Genesis Apocryphon was trying to do the same thing that Bradshaw and Larsen are doing, that is, exonerate Noah from any wrongdoing.

Likewise, Bradshaw and Larsen’s speculation that the “sin of Ham” was that Noah’s son “was neither qualified nor authorized to enter a place of divine glory” (p. 305) is also tenuous. Their evidence, while also interesting, is not definitive, and is also derived in part from their reading of later biblical and pseudepigraphal texts and drawing parallels with the pericope in Genesis 9. While they’re reading of Genesis 9 is plausible, it is far from certain.

But my hesitancy to agree with Bradshaw and Larsen on this point doesn’t severely detract from my overall appreciation for the effort and thoughtfulness that they put into this marvelous book. In the end, I wholeheartedly agree with this statement made by Bradshaw and Larsen at the beginning of their impressive volume.

The acceptance of the book of Moses as
part of the LDS scriptural canon and, more generally, the premise that the
Joseph Smith Translation of the Bible may contain something more than naïve
personal speculations on passages that perplexed the Prophet has not only been grounds
for amusement for many non-Mormons but also has drawn criticism from some within
the tradition of the Restoration. . . . It is our firm witness that the book of
Moses is a priceless prophetic reworking of the book of Genesis, made with
painstaking effort under divine direction. Although neither “complete” nor
“inerrant,” it is a text of inestimable value that should be one of the centerpieces
of our gospel study. (pp. 17–18)

To that end, any Latter-day Saint interested in an informative and engaging scriptural commentary on the Book of Moses would greatly benefit from both volumes 1 and 2 of In God’s Image and Likeness.

[The book can be purchased at the FairMormon Bookstore or amazon.com.]

Addendum: Jeffrey Bradshaw has responded to my brief comments on Genesis 9. My review here was meant to be quick and limited, so I may not have done justice to Bradshaw and Larsen’s argument. Below are Bradshaw’s comments.

David and I qualify our explorations of an alternative interpretation of Genesis 9 as an “admittedly tentative” effort to “account for its many anomalies.” Many other respected scholars have remarked on the odd inconsistency of the Noah portrayed in Genesis 8 and Genesis 9, leading to conclusions such as that of Gordon Wenham that “the two traditions are completely incompatible and must be of independent origin.” In addition, it might be helpful to readers if you could note that the purported statement of Joseph Smith is not a completely isolated phenomenon. For example, drawing their conclusions from the Hebrew text of Genesis 9 alone (i.e., not considering the Genesis Apocryphon), Koler and Greenspahn concur with the opinion that Noah was enwrapped in a vision while in the tent, and that Ham’s sin was looking at Noah while the latter was in the course of revelation.[5]

[3]: For those unaware of or otherwise unfamiliar with the corpus of Enochic pseudepigrapha, my good friend Colby Townsend provides an overview of this literature in an appendix.

[4]: Bradshaw and Larsen (p. 300, n. 35) cite Charles Walker’s 1881 diary entry of a conversation he had with William Allen where Allen attributed the quote to Joseph Smith.