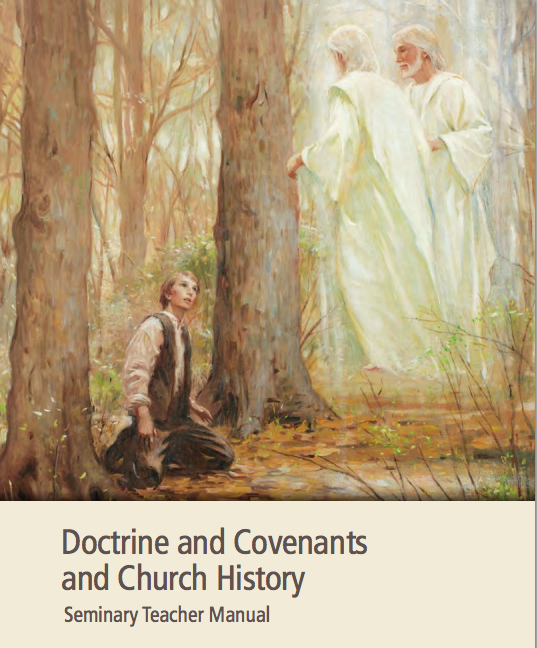 The Church has released a new edition of the Doctrine and Covenants and Church History manual for seminary students. One of the remarkable aspects of the new manual is that it includes a discussion of several sensitive topics in church history. These topics include the following.

The multiple accounts of the First Vision were prepared at different times and for different audiences. In these accounts, Joseph Smith emphasized different aspects of his experience of the First Vision, but the accounts all agree in the essential truth that Joseph Smith did indeed have the heavens opened to him and see divine messengers, including God the Father and the Lord Jesus Christ. Because the 1838 account was part of Joseph Smith’s official history and testimony to the world, it was included in the Pearl of Great Price as scripture. (p. 20)

The manual then recommends students to read articles by Milton Backman and Richard Lloyd Anderson published in the Ensign discussing the various accounts of the First Vision (pp. 20, 22).

2. There is an entire chapter devoted to the Mountain Meadows Massacre and the Utah War (Lesson 151). The manual gives a brief historical overview of the events leading up to the massacre and acknowledges the participation of “Latter-day Saint leaders and settlers” in the crime (p. 523). Besides citing an article on the Mountain Meadows Massacre published in the Ensign, the manual also reproduces this quote given by President Henry B. Eyring at the 150 year anniversary of the massacre.

The gospel of Jesus Christ that we espouse, abhors the cold-blooded killing of men, women, and children. Indeed, it advocates peace and forgiveness. What was done [at the Mountain Meadows] long ago by members of our Church represents a terrible and inexcusable departure from Christian teaching and conduct.

3. In a chapter on the history of the Pearl of Great Price there is a brief overview of the history of the Book of Abraham, including the loss and recovery of several papyrus fragments once in the possession of Joseph Smith (pp. 524–526). Included in the discussion about the Book of Abraham is this (which is actually reprinted from the Church’s Pearl of Great Price Student Manual).

In 1966 eleven fragments of papyri once possessed by the Prophet Joseph Smith were discovered in the Metropolitan Museum of Art in New York City. They were given to the Church and have been analyzed by scholars who date them between about 100 B.C. and A.D. 100. A common objection to the authenticity of the book of Abraham is that the manuscripts are not old enough to have been written by Abraham, who lived almost two thousand years before Christ. Joseph Smith never claimed that the papyri were autographic (written by Abraham himself), nor that they dated from the time of Abraham. It is common to refer to an author’s works as ‘his’ writings, whether he penned them himself, dictated them to others, or others copied his writings later. (p. 525)

(Incidentally, yours truly has written a thing or two on this subject over at the Interpreter blog, which you can access here.) The manual also states, “Although we do not know the exact method Joseph Smith used to translate the writings, we do know that he translated the book of Abraham by the gift and power of God” (p. 525).

4. The new manual has material covering the practice of plural marriage, including an entire chapter on Joseph Smith’s plural marriage (Lesson 140) and a mentioning of Post-Manifesto plural marriage. Below are a few pertinent excerpts from the manual.

In this dispensation the Lord commanded some of the early Saints to practice plural marriage. The Prophet Joseph Smith and many other Church leaders found this commandment difficult, but they obeyed it. After receiving revelation, President Wilford Woodruff issued the Manifesto, which was accepted by the Church as authoritative and binding on October 6, 1890. This led to the end of the practice of plural marriage in the Church (see Official Declaration 1). (p. 204)

While Joseph Smith was working on the inspired translation of the Old Testament in 1831, he read about some of the ancient prophets practicing plural marriage (also called polygamy). Under this practice, one man is married to more than one living wife. The Prophet studied the scriptures, pondered what he learned, and eventually took his questions about plural marriage to Heavenly Father in prayer. . . . the Prophet Joseph Smith was reluctant to begin the practice of plural marriage. He stated that he did not begin the practice until he was warned that he would be destroyed if he did not obey. . . . Because of a lack of historical documentation, we do not know about Joseph Smith’s early attempts to comply with the commandment. However, by 1841 the Prophet had begun to obey the commandment and to teach it to some members of the Church, and over the next three years he married additional wives in accordance with the Lord’s commands. The Prophet Joseph Smith’s obedience to the Lord’s commandment to practice plural marriage was a trial of faith for him and his wife Emma, whom he loved dearly. (pp. 477–478)

Practicing plural marriage brought additional challenges. Because the practice was initially kept very quiet, rumors began to spread about Church leaders marrying additional wives. These rumors greatly distorted the truth, slandered the names of the Prophet and other Church leaders, and contributed to increased persecution against the Saints. (p. 479)

A small number of Latter-day Saints continued to enter into new plural marriages after the Manifesto was given. In 1904, President Joseph F. Smith announced “that all [plural] marriages are prohibited, and if any officer or member of the Church shall assume to solemnize or enter into any such marriage he will be . . . excommunicated”. . . . This policy continues today. (p. 530)

Towards the end of the chapter on Joseph Smith’s plural marriage, the manual warns, “Much unreliable information pertaining to plural marriage exists on the Internet and in many print sources. Be cautious and wise with such information. Some authors who write about the Church and its history present information out of context or include partial truths that can be misleading. The intent of some of these writings is to destroy faith” (p. 479). I myself have raised a similar point in this post. The manual then concludes by recommending, “Reliable historical research concerning the practice of plural marriage can be found at josephsmithpapers.org and byustudies.byu.edu” (p. 480).

5. On describing the nature of the Joseph Smith Translation, the manual says the following.

Around the fall of 1830, Joseph Smith was commanded by the Lord to translate the Bible. He did not translate the Bible from one language to another; nor did he have an original biblical manuscript to work from. Instead, Joseph would read and study passages from the King James Version of the Bible and then make corrections and additions as inspired by the Holy Ghost. Thus, the translation was more of an inspired revision than a traditional translation.
The Joseph Smith Translation is estimated to have affected at least 3,400 verses in the King James Version of the Bible. These differences include additions (to clarify meaning or context), deletions, rearranged verses, and complete restructurings of certain chapters. The Joseph Smith Translation clarified doctrinal content, especially the mission of Jesus Christ, the nature of God, the nature of man, the Abrahamic covenant, the priesthood, and the Restoration of the gospel. (pp. 180–181)

6. The historical circumstances surrounding the priesthood ban and President Spencer W. Kimball’s 1978 revelation are discussed in a chapter on Official Declaration 2 (Lesson 157). As part of this discussion, the manual reprints the introductory material to OD 2 printed in the 2013 edition of the scriptures.

The Book of Mormon teaches that ‘all are alike unto God,’ including ‘black and white, bond and free, male and female’ (2 Nephi 26:33). Throughout the history of the Church, people of every race and ethnicity in many countries have been baptized and have lived as faithful members of the Church. During Joseph Smith’s lifetime, a few black male members of the Church were ordained to the priesthood. Early in its history, Church leaders stopped conferring the priesthood on black males of African descent. Church records offer no clear insights into the origins of this practice.

There is also the recommendation at the end of the chapter for students to “go to Gospel Topics on LDS.org and search for ‘race and the priesthood'” to learn more about the priesthood ban (p. 545).

7. Finally, in discussing section 77 of the Doctrine and Covenants, the manual straightforwardly says, “The 7,000 years [in vv. 6–7]  refers to the time since the Fall of Adam and Eve. It is not referring to the actual age of the earth including the periods of creation” (p. 280).

I am sure there is more that could be said about the new manual, but suffice it to say from the above examples that the Church is implementing productive measures towards introducing these sort of issues in a faith-promoting, safe, and positive environment (seminary). This will hopefully serve to “inoculate,” to use the popular metaphor, seminary students against the often highly debatable claims and negative information one can currently find on the Internet. While one might perhaps quibble over how certain issues are addressed in the new manual, that there is even a discussion at all in Church curriculum is, in my estimation, a step in the right direction.