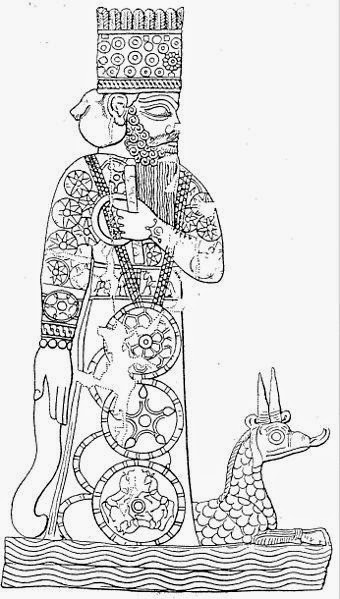 Also significant for Latter-day Saints is the Enuma Elish’s depiction of the primeval theomachy in the council of the gods, wherein Tiamat and her evil host of warrior gods battle against Marduk for reign over the divine council and, ultimately, the cosmos (3–4.129). The motif of a primeval theomachy in the divine council likewise appears in the Book of Abraham, in this instance between the premortal Jehovah and Satan over the agency of mankind (Abraham 3:22–28; compare Moses 4:1–4). Again, this is not to say that the Book of Abraham and the Enuma Elish are drawing directly on each other but rather to note the common presence of this motif in ancient Near Eastern creation mythology.

Yesterday I was re-reading Terryl Givens’ book When Souls Had Wings: Pre-Mortal Existence in Western Thought when, to my surprise, I came across his discussion of the pre-mortal council depicted in the Book of Abraham.

In 1835 [Joseph] Smith claimed another burst of inspired revelation and produced writings attributed to the biblical patriarch Abraham. . . . In this account, Abraham, posses of a Urim and Thummim, an ancient oracle associated with seership and mentioned in the Bible, receives a panoramic vision of occult cosmology. His visionary journey takes him through space, near the very abode of God, and through time, back into heavenly assemblies that antedate the world’s creation.

Givens then goes on to quote Abraham 3 about the pre-mortal council. He then notes about the Book of Abraham:

Several striking affinities with Semitic traditions are immediately apparent. The council scene in particular is consistent with a standard motif in Mesopotamian and Ugaritic literature, wherein a divine assembly convenes to consider a problem and a series of proposals is offered, often with one making the proposal demanding all power and glory (as Marduk demands in the Babylonian creation narrative Enuma Elish). In the present text, God stands surrounded by a number of exalted figures, who are referred to as “rulers.” . . . (It is significant that Smith recasts the first verse of Genesis as “the Head God brought forth the Head Gods in the grand, head council.”) As was the case with the Mesopotamian texts, the council discusses the creation of a human world. . . . Further similarities with antecedents only heighten the family resemblance. The challenge of a Marduk or the schism among the gods described in Nag Hammadi texts are paralleled in Smith’s account by a pre-mortal Lucifer attempting to supplant God. . . . Finally, when the creation of the world ensues in the next scene, the text produced by this New York farmer unabashedly refers to “the gods,” who proceed to organize the earth out of preexistent materials.

For those who are interested, here’s the pertinent excerpt from the Enuma Elish that talks about Marduk’s demands of the divine council.

When he [Marduk] spoke, he said to me, / “If indeed I am to champion you, / Subdue Tiamat and save your lives, / Convene the assembly, nominate me for supreme destiny! / In the Assembly Place of the Gods take your places, / all of you, in joyful mood. / When I speak, let me ordain destinies instead of you. / Let nothing I shall bring about be altered, / Nor what I say be revoked nor changed.” . . . To Marduk their champion they ordained destiny. (Context of Scripture 1.111, Tablet 3, lines 115–122, 138.)

Givens and I approach the similarities between the Book of Abraham and the Enuma Elish from two different angles. I have focused on the theomachy between Tiamat and Marduk, whereas Givens focuses on Marduk’s claims to ascendency in the divine council. However, these two approaches or emphases actually nicely compliment each other, as the progression of the story in Enuma Elish is that Marduk will be victorious in the theomachy with Tiamat so that he can claim his position at the head of the council.

Notice the similar sequence in the Book of Abraham. In this text, Lucifer, like Marduk, claims his glory in the council before he actually carries out his plans. However, unlike in Enuma Elish, Lucifer is stopped prematurely by the head of the council. This is something of an ironic twist, as one would normally expect the champion of the council to be given the green light and then prove himself victorious, as with Marduk in the Enuma Elish. In the Book of Abraham, however, Lucifer is stopped dead in his tracks, and instead Jehovah is selected to be the champion of the council, with Lucifer being cast down for rebellion.

It’s intriguing to consider why the Book of Abraham presents the account in this way. Given that in Abraham 3:15 God informs Abraham that he’s going to teach the Egyptians this cosmology in his evangelistic endeavors, perhaps the narrative of Lucifer preemptively taking glory for himself, only to be halted, functioned as a warning for the Egyptians not to preemptively ascribe divine glory or honors to their foreign gods. In other words, since Jehovah was selected by the Head to be the rightful champion of the council, for the Egyptians to ascribe glory to other gods besides Him would be to partake in the same rebellion as the Son of Perdition.

In any event, my own connection between the Book of Abraham and the Enuma Elish was drawn independent of Givens, as I’d forgotten that he’d noted this in his 2010 publication. I wish now, however, that I had re-read Givens’ remarks on this before I published my article, as I would’ve liked to have drawn attention to this source in my discussion of the divine council in the Book of Abraham.

Not too shabby for a New York farmer who couldn’t read a word of Akkadian.