For the record, this is the letter sent to John Dehlin by his Stake President Bryan C. King on August 7, 2014. In this letter, President King makes it clear why Dehlin was being placed on disciplinary probation and what Dehlin had to do to ensure he didn’t face a disciplinary council. 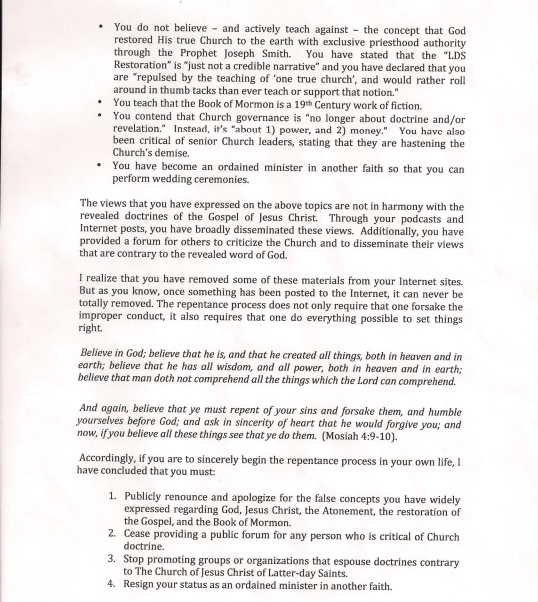 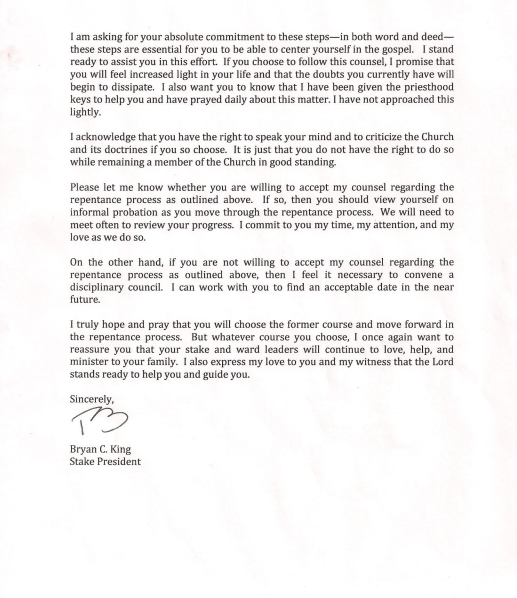 Notice carefully why Dehlin was being placed on probation. Was it for questioning? Was it for having doubts? Was it even for disagreeing with the Brethren? No. It was because Dehlin had “broadly disseminated” views “not in harmony with the revealed doctrines of the Gospel of Jesus Christ.” Dehlin had also “provided a forum for others to criticize the Church and to disseminate their views.” There’s a word for what Dehlin has been up to. That word is “apostasy.”

But what views got Dehlin in trouble? Let’s see.

1. Promoting atheism/agnosticism.
2. Denying or doubting the divinity of Jesus and the reality of the Atonement.
3. Denying the Restoration of the Gospel.
4. Denying the authenticity of the Book of Mormon.
5. Denying the inspired calling of Church leaders.
6. Being ordained a minister in another faith.

This is the crux of the entire matter. No rational, sensible person could find this stance from President King objectionable. If you’re going to openly and repeatedly criticize a group or organization you belong to, you can claim no special protection or exemption from losing your membership with said group or organization. Contrary to the caricature I’m seeing online (mainly amongst Dehlin’s supporters), this issue is not about an oppressive hierarchy restricting freedom of expression or thought. Nobody is stopping Dehlin from expressing his criticisms of the Church. He’s free to do so as he pleases. It’s rather all about the fact that the Church has a right to disassociate itself from those whom it deems unfit for membership. It has the right to establish the terms on what kind of behavior is and isn’t acceptable for individuals who want to claim membership. Dehlin has been informed that his behavior, in the eyes of the Church (or at least his ecclesiastical leaders), is unacceptable, and constitutes apostasy, and has been given the opportunity to change his behavior. If Dehlin refuses the terms offered to him, which it appears he has, then he himself is responsible for the consequences.

So I don’t want to hear any indignant cries that Dehlin is being persecuted or punished for merely having questions. This is not about Dehlin’s doubts or concerns. It’s not even about Dehlin publicly announcing his doubts or concerns. Instead, it is all about Dehlin’s actions. He has been exhibiting apostate behavior and promoting apostate views for some time. He has been given the opportunity to recant and repent, and has refused that opportunity. President King’s actions are entirely reasonable and justified given the facts of Dehlin’s behavior. So I must ask: why all of the outrage over Dehlin’s disciplinary council? It is truly baffling to me. 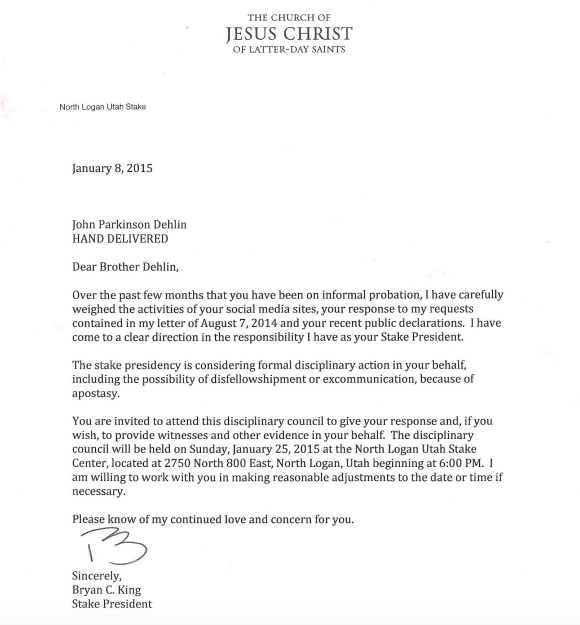 Notice carefully that President King based his decision to call a disciplinary council for Dehlin after he had observed Dehlin’s “activities” on his “social media sites,” his “response to my requests” in his previous letter, and his “recent public declarations.”
Again, this is not an issue of punishing Dehlin for having doubts or questions. It is a matter of preventing Dehlin from using his membership in the Church to in any way leverage his apostate views or actions. In short, President King, in summoning Dehlin to a disciplinary council, is merely following the Church’s teaching laid out in D&C 134.

We believe that all religious societies have a right to deal with their members for disorderly conduct, according to the rules and regulations of such societies; provided that such dealings be for fellowship and good standing; but we do not believe that any religious society has authority to try men on the right of property or life, to take from them this world’s goods, or to put them in jeopardy of either life or limb, or to inflict any physical punishment upon them. They can only excommunicate them from their society, and withdraw from them their fellowship. (D&C 134:10)

Can anyone with a straight face tell me that Dehlin is in “jeopardy of either life or limb” or at risk of “physical punishment”? Of course he isn’t. He is merely being called to account for his disorderly conduct and his opposition to the Church.
By the way, before anyone accuses me of using harsh language for calling Dehlin’s actions “apostate,” allow me to remind the reader of how the First Presidency recently defined “apostasy.”

Simply asking questions has never constituted apostasy. Apostasy is repeatedly acting in clear, open, and deliberate public opposition to the Church or its faithful leaders, or persisting, after receiving counsel, in teaching false doctrine.

I honestly cannot think of anybody right now to whom this applies more than John Dehlin.
To conclude, the most succinct summary of why Dehlin is facing his disciplinary council comes from this part of President King’s August letter: “I acknowledge that you have the right to speak your mind and to criticize the Church and its doctrines if you so choose. It is just that you do not have the right to do so while remaining a member of the Church in good standing.”
And to think that Dehlin was almost named “Mormon of the Year” at Times and Seasons. (Thankfully, cooler heads prevailed and the award went to some individuals truly worthy of the title.)

24 thoughts on “For the Record”