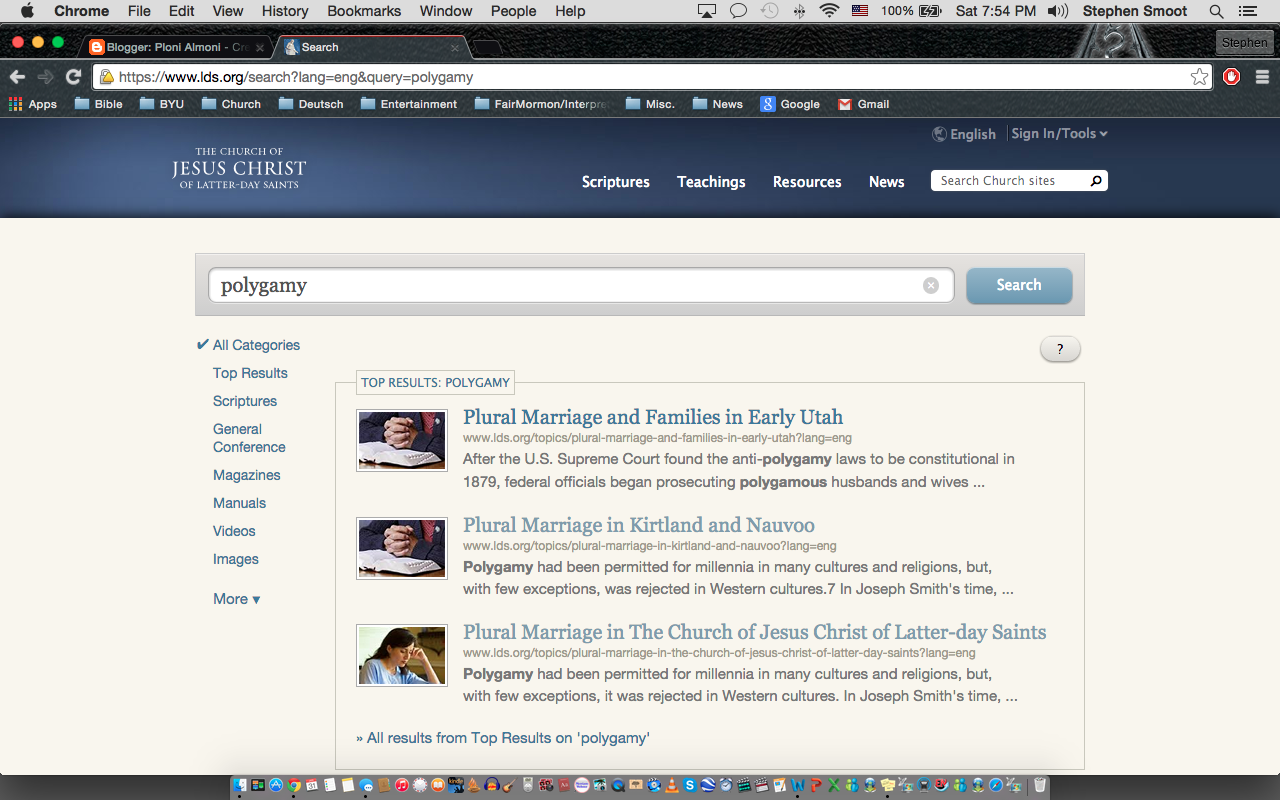 A phenomenon I’ve observed with some critics of the Church on the Internet is the propensity to “move the goalposts” when confronted with evidence that contradicts their arguments. For those who aren’t familiar with this metaphor, moving the goalposts occurs when someone in a debate “change[s] the criterion (goal) of a process or competition while still in progress, in such a way that the new goal offers one side an intentional advantage or disadvantage.”

To illustrate this, let’s take a look at the reaction seen on some corners of the web to the Gospel Topics essays on sensitive or controversial issues. For years, I’ve heard the complaint that the Church isn’t doing anything to address such controversies as the early Mormon practice of plural marriage, the translation method of the Book of Mormon, the issues surrounding the Book of Abraham and the Joseph Smith Papyri, etc. When the Church began releasing the Gospel Topics essays in 2013 that did address these very issues, I noticed that while many critics were pleased by this (if only because it fulfilled some fantasy of theirs that past dissidents had finally been vindicated), still many others (unwilling to cede any ground) merely shifted the goalposts. “Well, that’s all fine and good,” they said, “but the essays don’t have the names of the authors. Nor the names of any of the members of the First Presidency or the Quorum of the Twelve Apostles.” In response to this, some (such as myself) pointed out the fact that the Church made public that the essays were vetted by the First Presidency before being published. Whether any names appeared on the essays or not is pointless.* They’re as official as anything can be, having gained approval by the highest levels of Church authority. (Incidentally, Elder Steven E. Snow once related to me in a conversation not too long ago that, in some instances, the Brethren undertook line by line revisions and edits before approving the essay for publication. That gives you an idea of both how serious they are about this stuff, as well as how informed they are on the content of the essays.)

Was that good enough for the critics? Of course not. “Well, okay, so the First Presidency and the Twelve are cool with the essays,” the critics said. “But instead of talking about them in Conference and publishing them in the Ensign, they just buried the essays on LDS.org. You see, they still don’t want members reading the articles!”

“Buried.” That’s the word I’ve read the most. Right next to “hidden” or “suppressed.” The authors at MormonThink, for example, assert, “The essays are not advertised in the Ensign, discussed in Conference or prominently mentioned on the Church’s website. They are merely listed in the topics section buried in the LDS.org website.”

The criticism has thus morphed from:

(If one is so inclined, one could follow the route of this ex-Mormon and shift the goalposts further by complaining that the essays only appear in English, which of course just goes to show how little the Church cares for members outside of English-speaking countries.)

Do you see how the goalposts have shifted? Not willing to grant the Church any good faith or credit (because, remember, it’s just a soulless corporation masquerading as a church), these critics devise ad hoc justifications for why the Church still isn’t doing enough for them. The Church, no matter what, can never be good enough. It will always be in the wrong. I bet the Church could release a new copy of Preach my Gospel with the Gospel Topics essays appended at the back, could run them in every copy of the Ensign from now until the Second Coming, could preach them from every General Conference, and could devote entire Sunday School classes to members copying them by hand, and the critics would still complain that the Church isn’t doing enough.

But let’s return to the claim by MormonThink that the essays are “buried” on LDS.org. To test this claim, I decided to use the basic search engine on the homepage of LDS.org to see how long it would take me to find them. Below are the results. 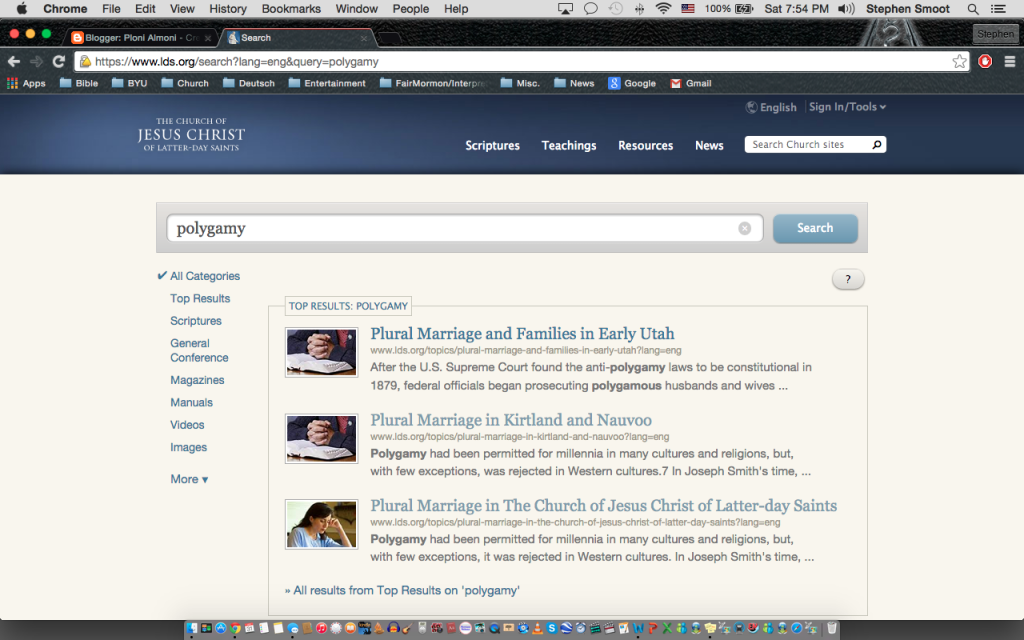 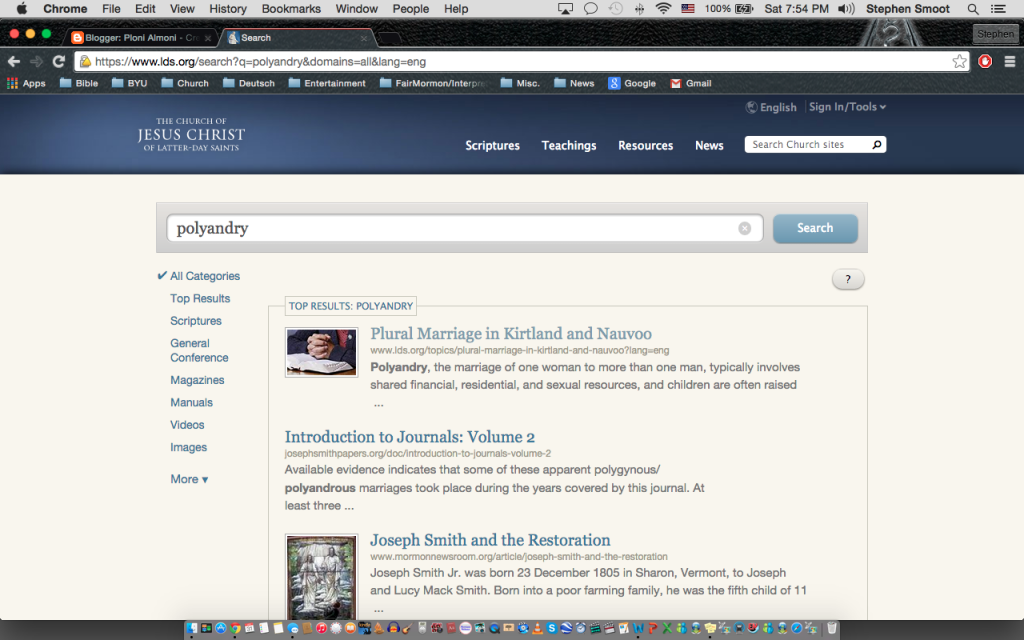 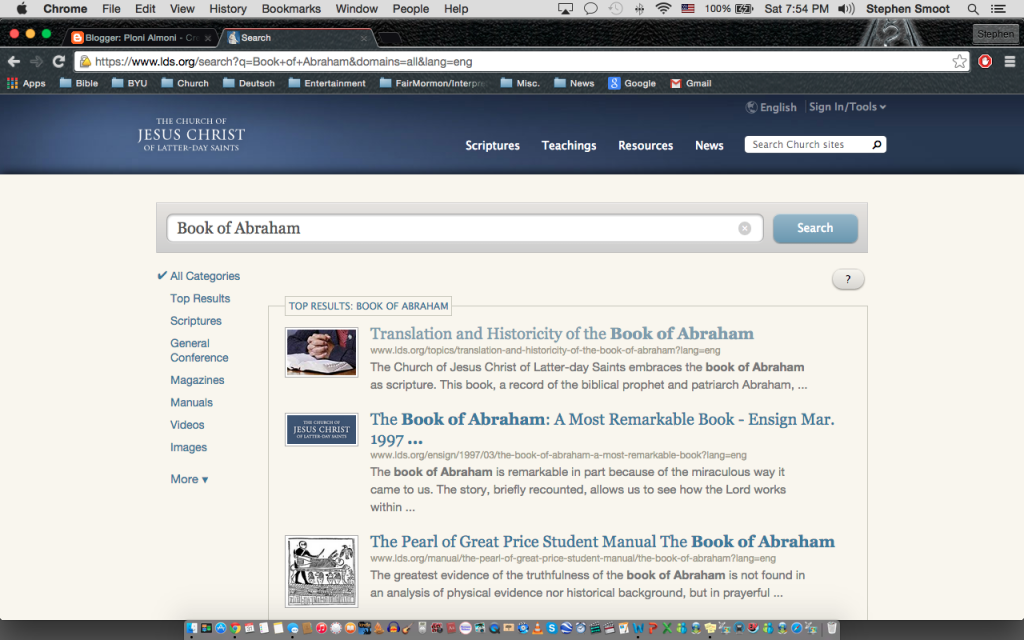 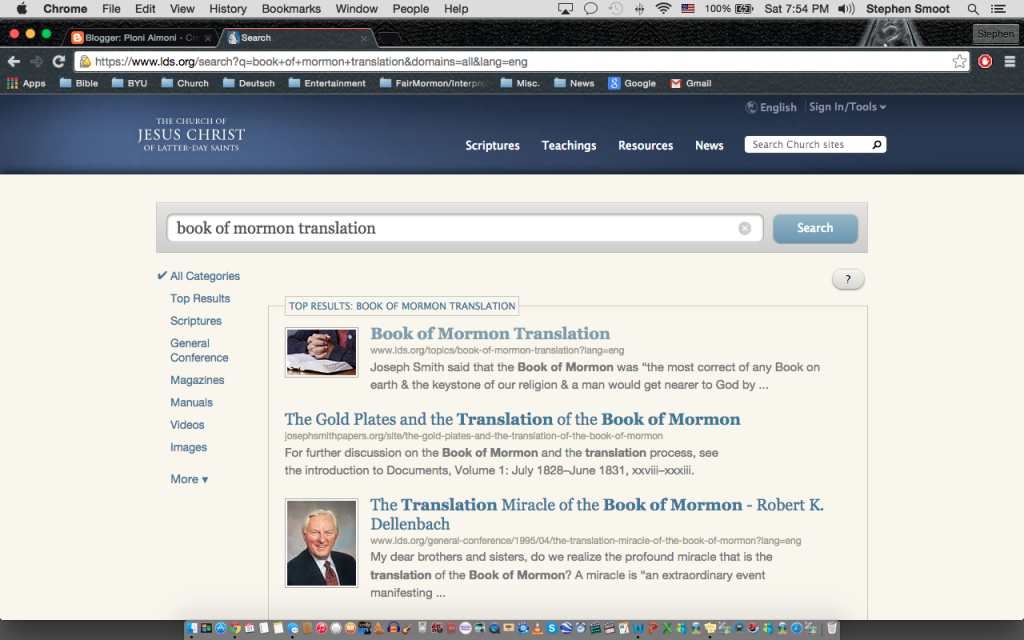 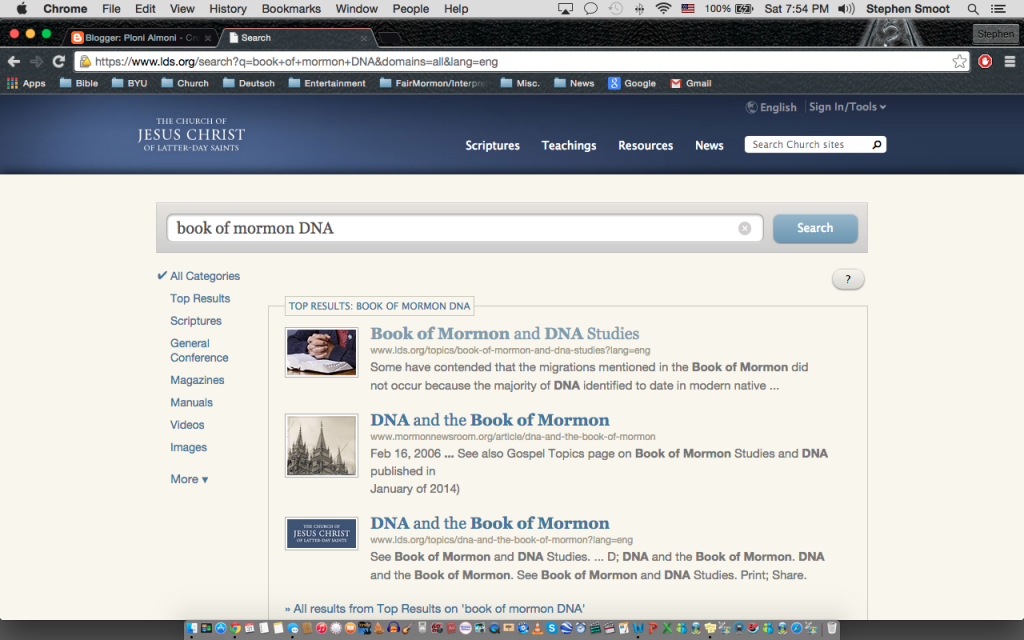 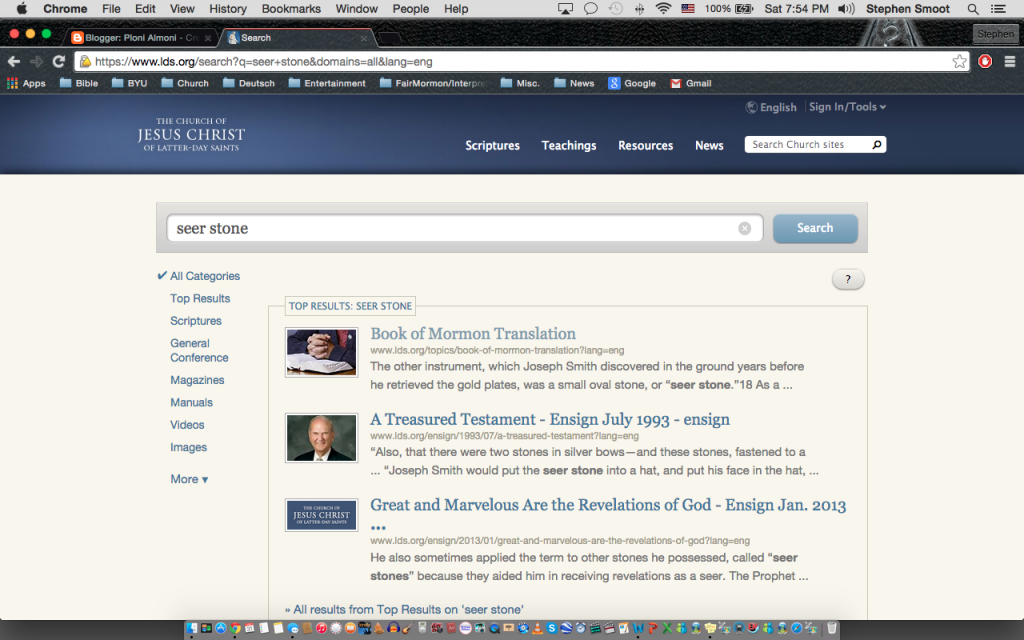 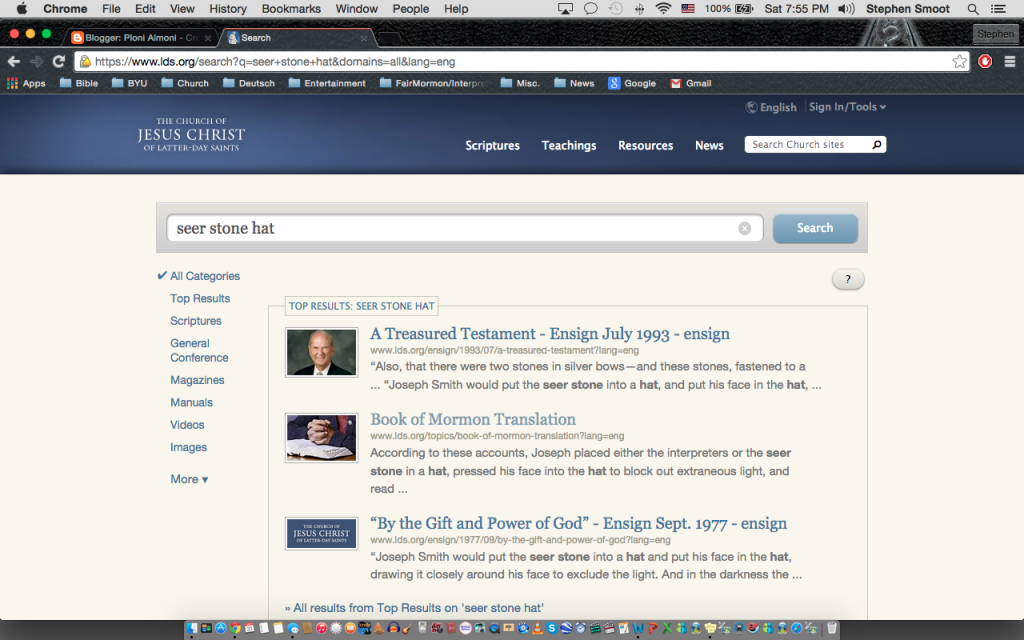 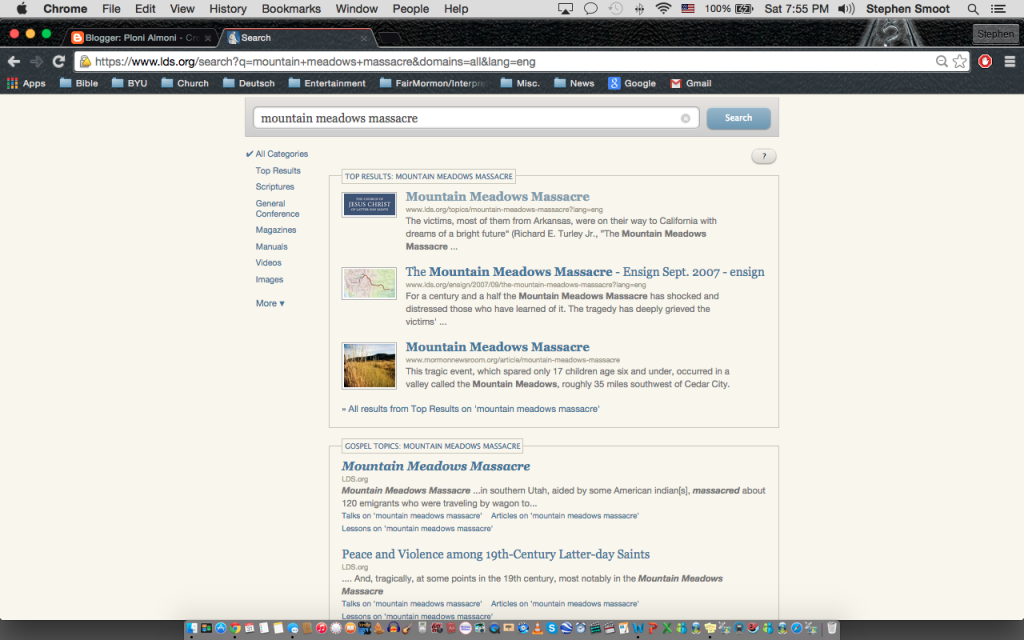 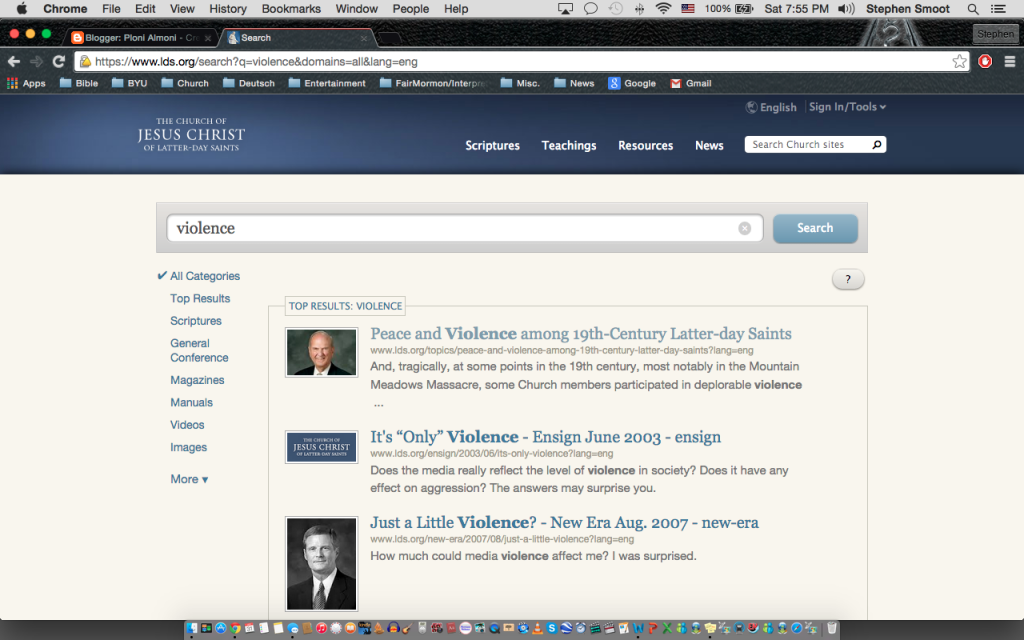 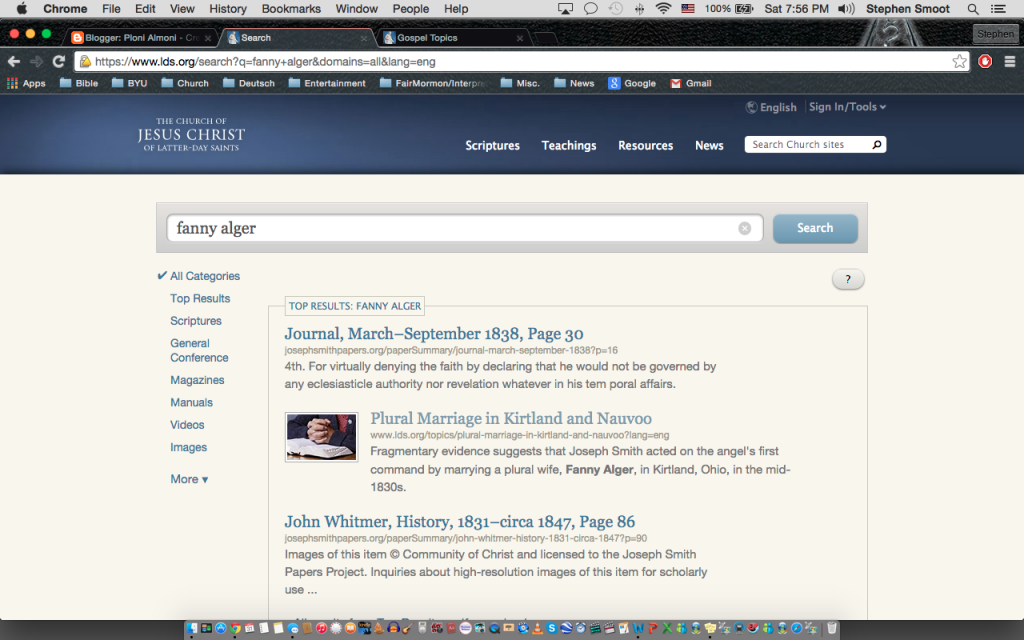 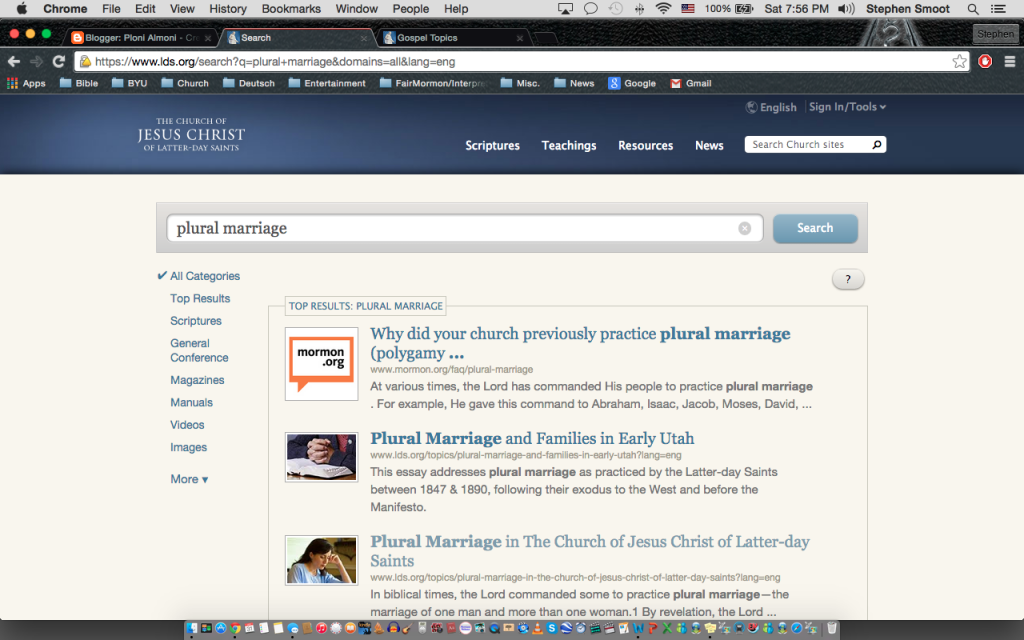 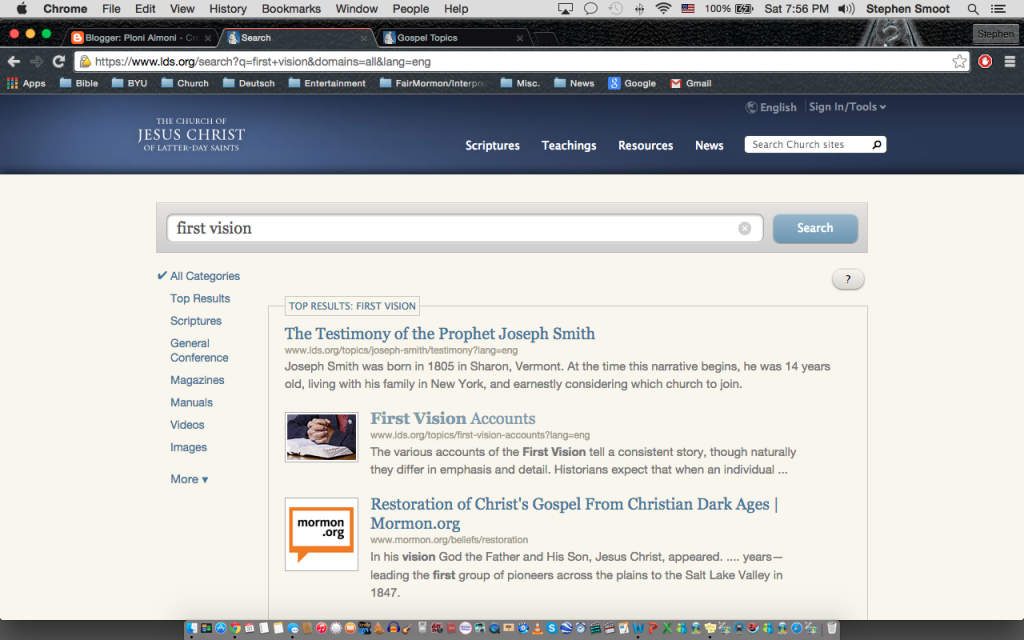 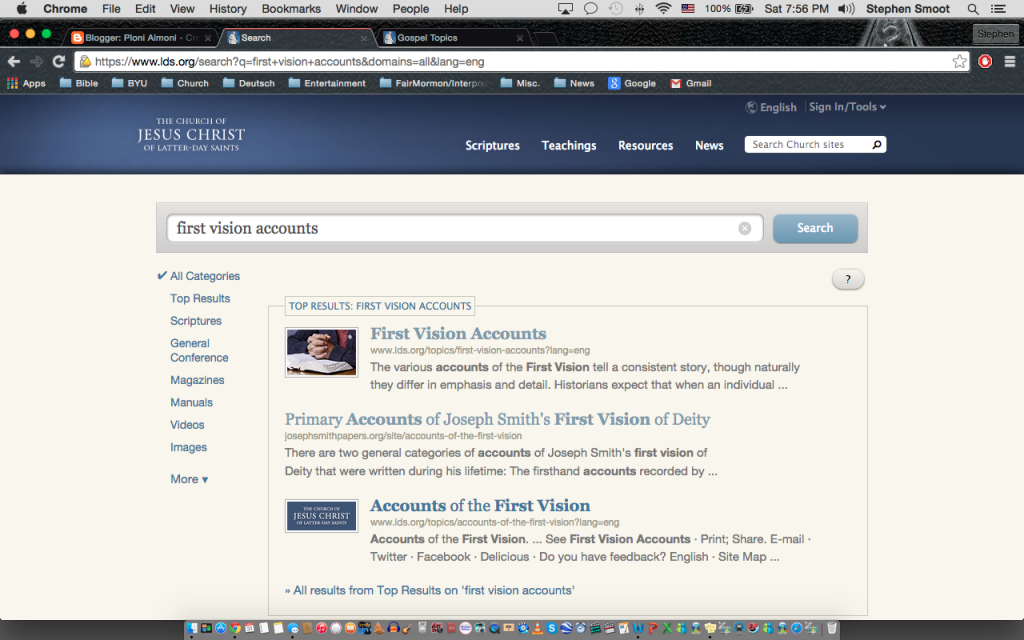 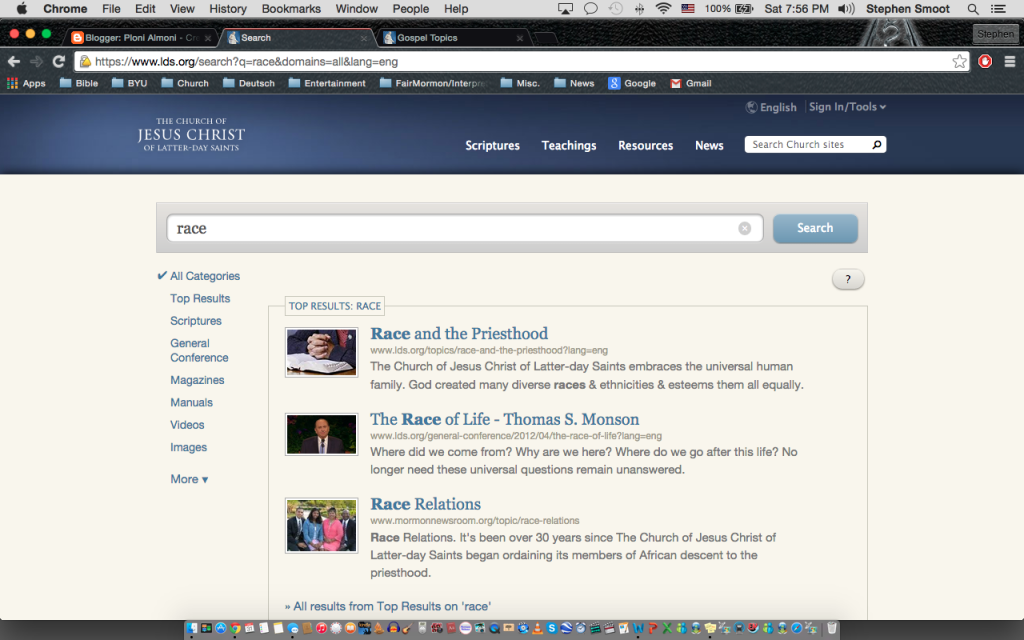 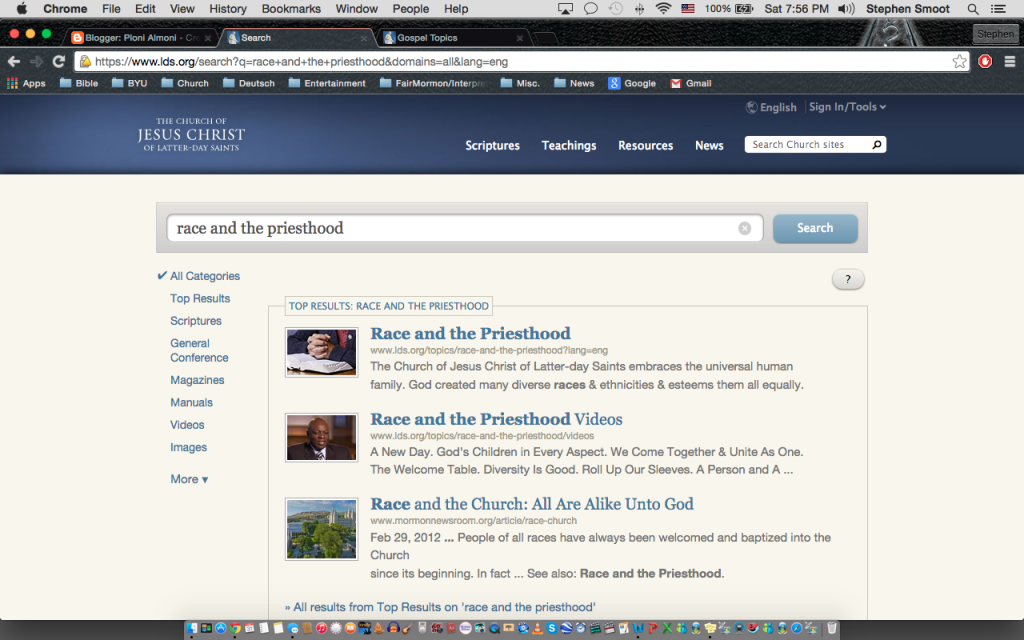 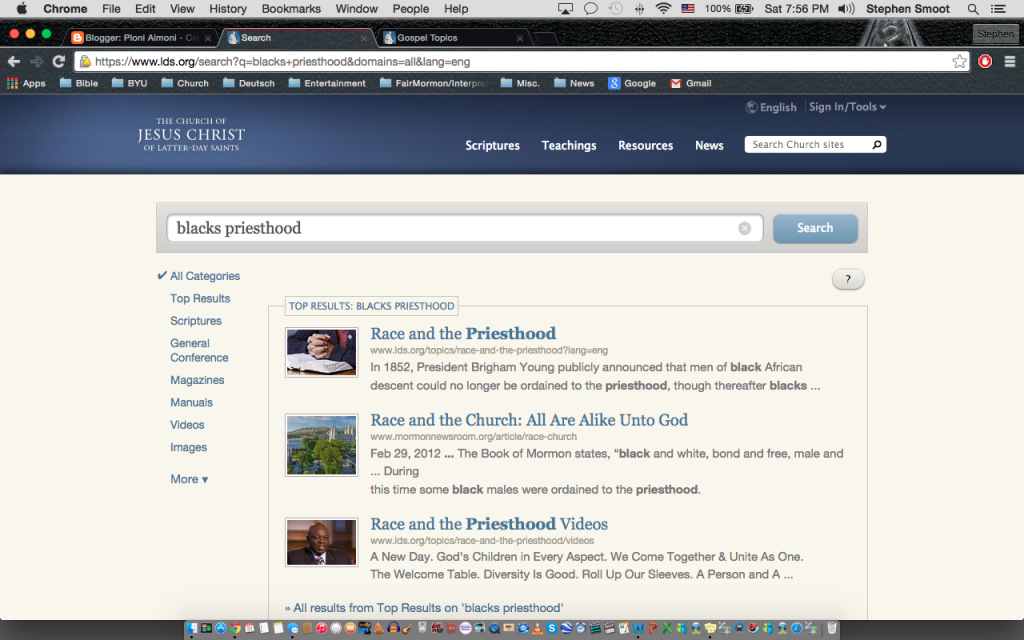 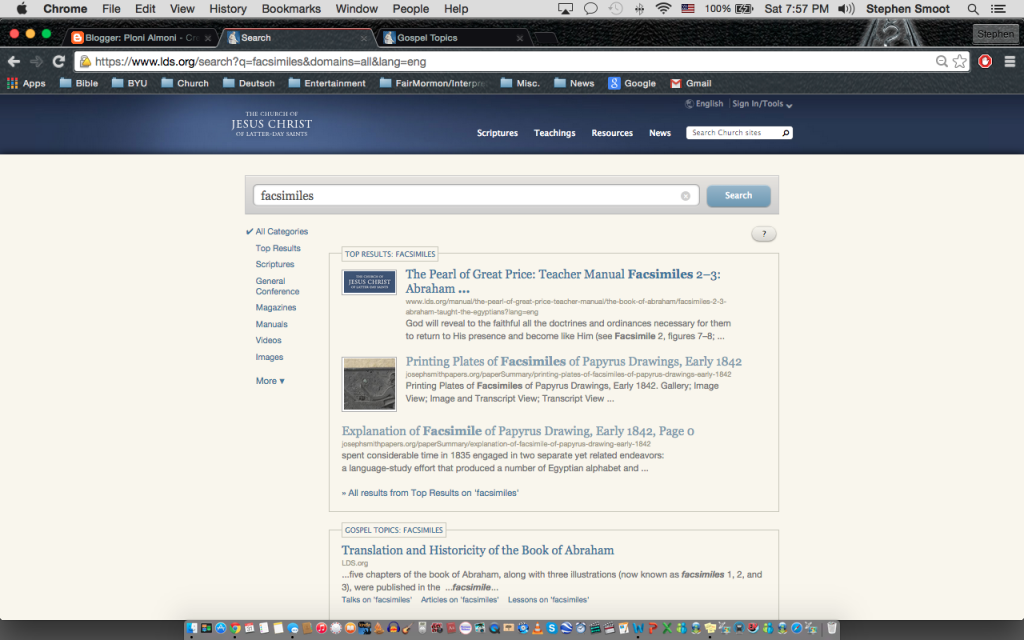 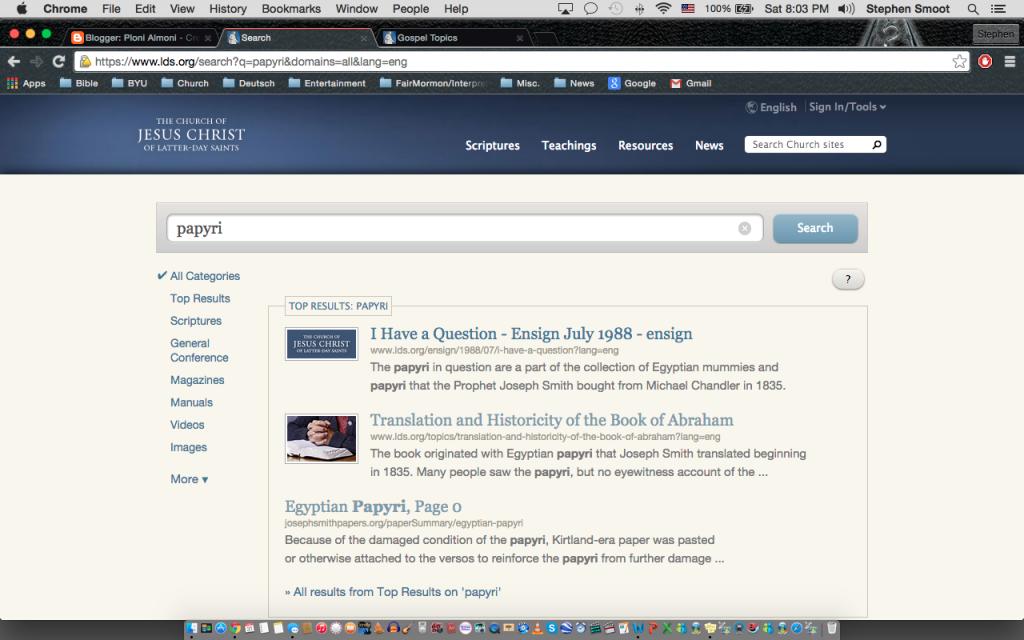 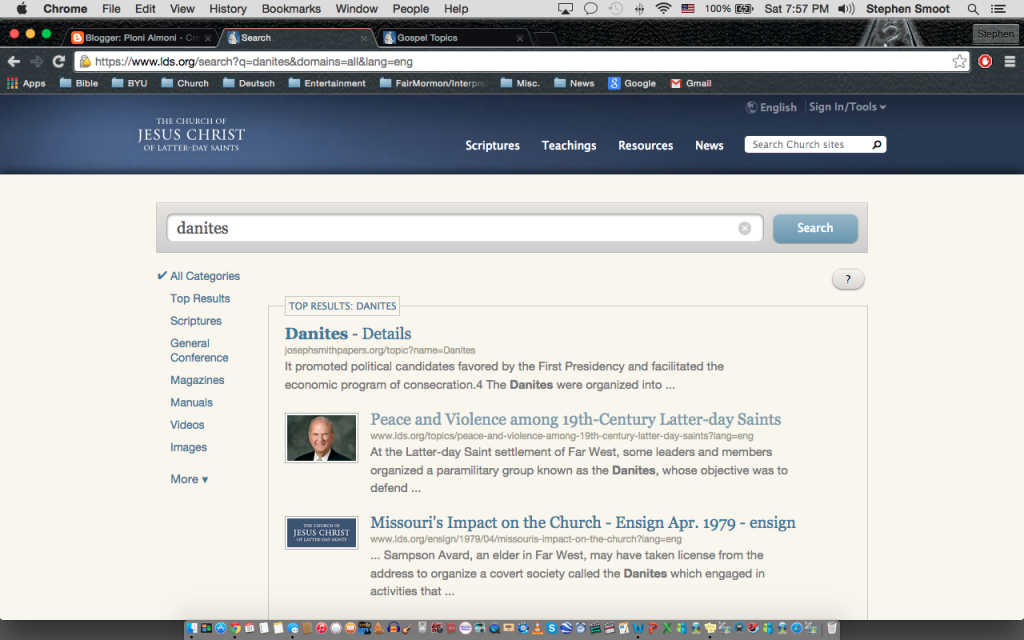 I guess MormonThink has a point, if by “buried” it means “pop up in the first 1-4 hits when using the homepage search engine.”
But let’s suppose you’re unable to use the search engine on the LDS.org homepage because . . . reasons . . . and want to instead go straight to the Gospel Topics page. Here is what you’ll be greeted with. 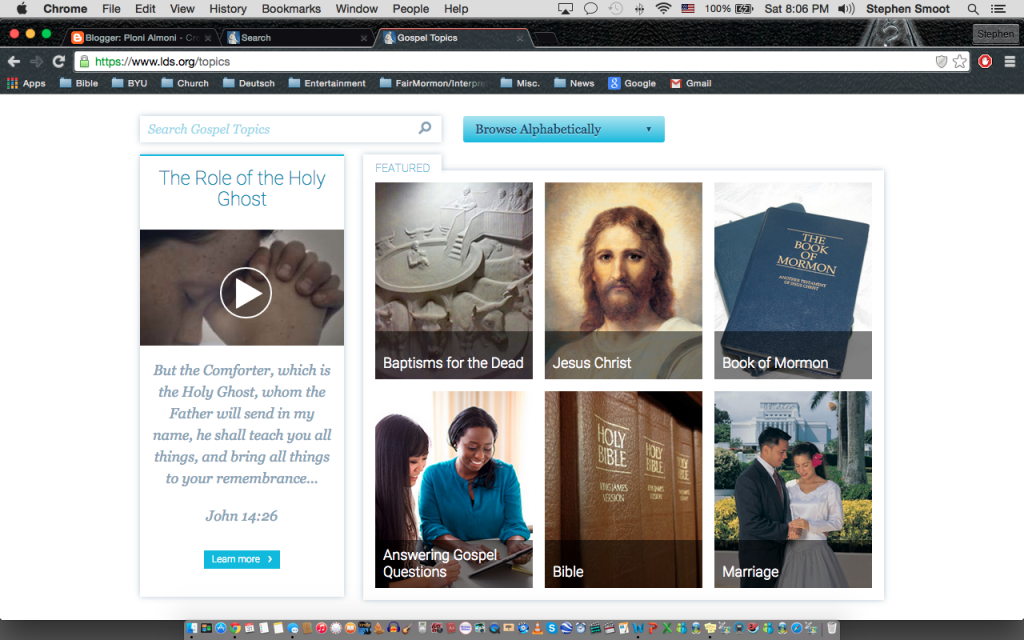 Ah ha! See, the essays are nowhere to be found! You have to use the search engine or browse article by article to find them!
Oh, wait. That’s the bottom half of the page. The top half looks like this. 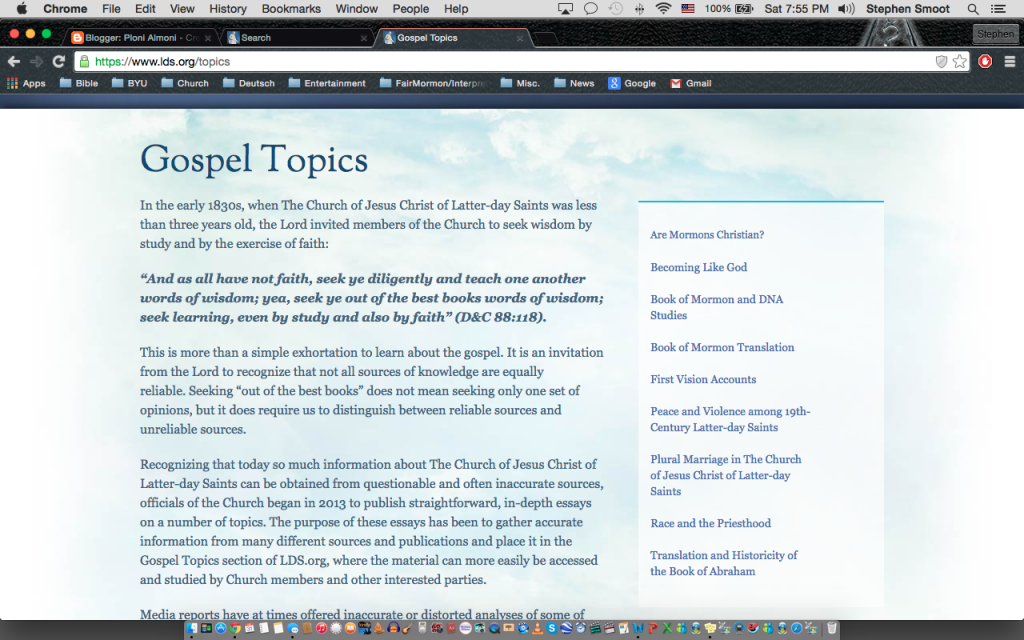 Notice what’s lined up there on the righthand side of the page?
At this point, though, let’s assume that you don’t even know how to access the Gospel Topics website. Besides simply using Google, which brings up this . . . 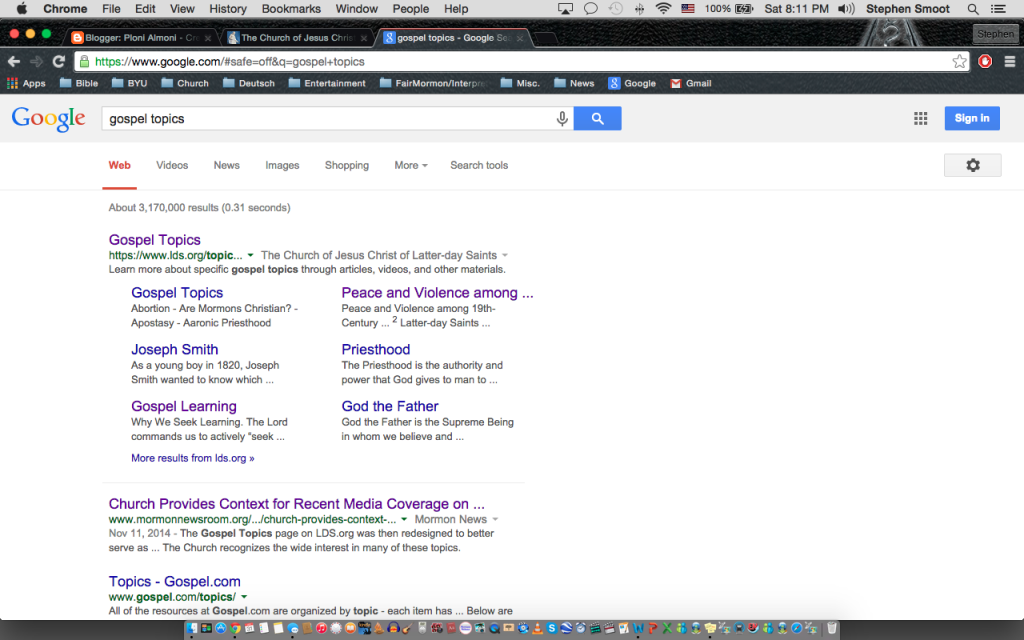 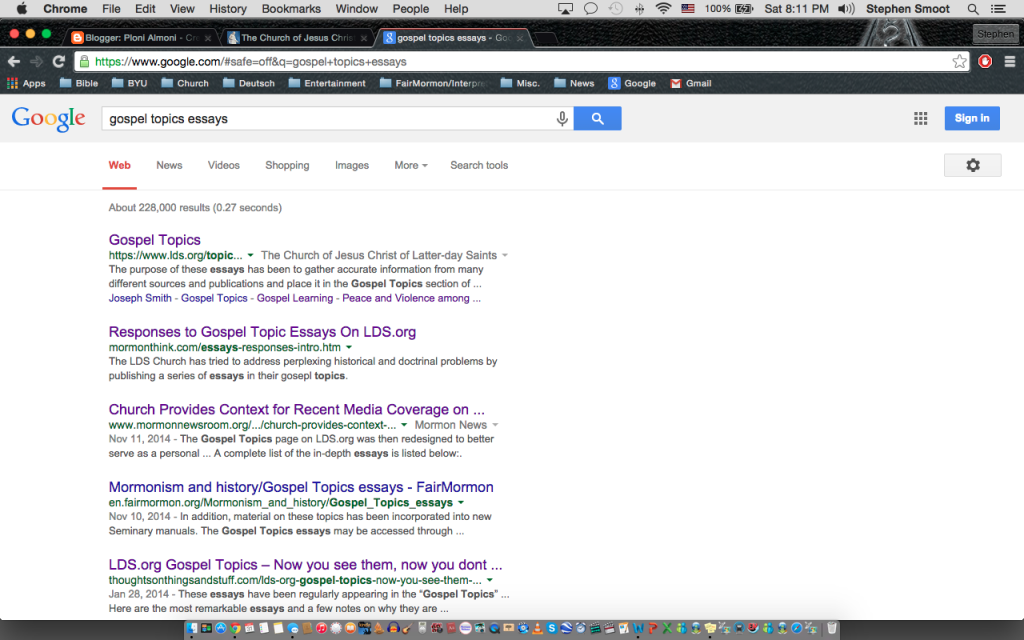 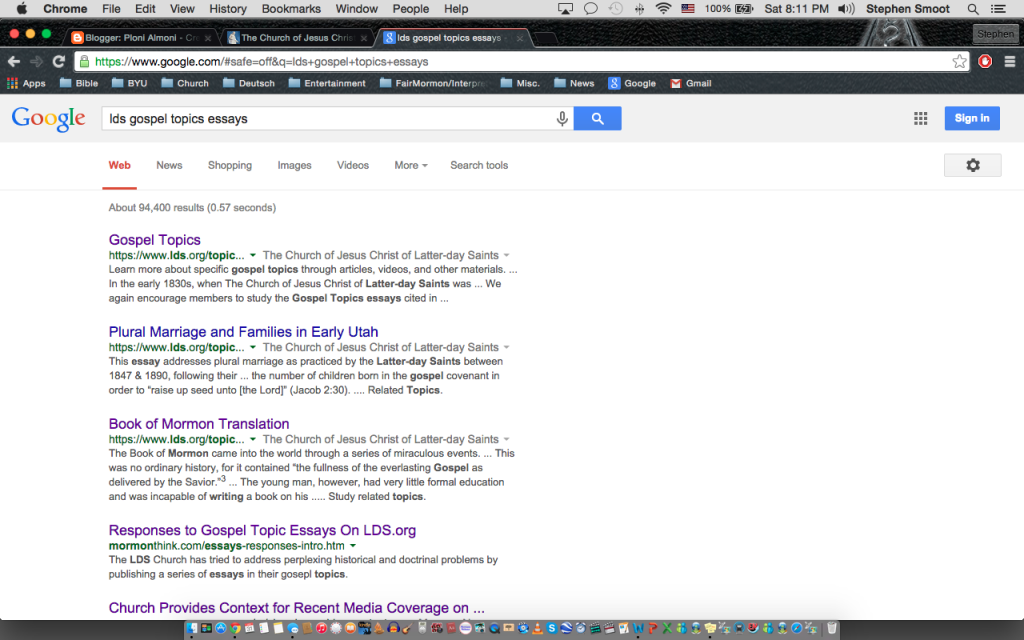 . . .  you could also just go to the LDS.org homepage, click on “teachings” (for if you want to, say, look up General Conference addresses) and find this. 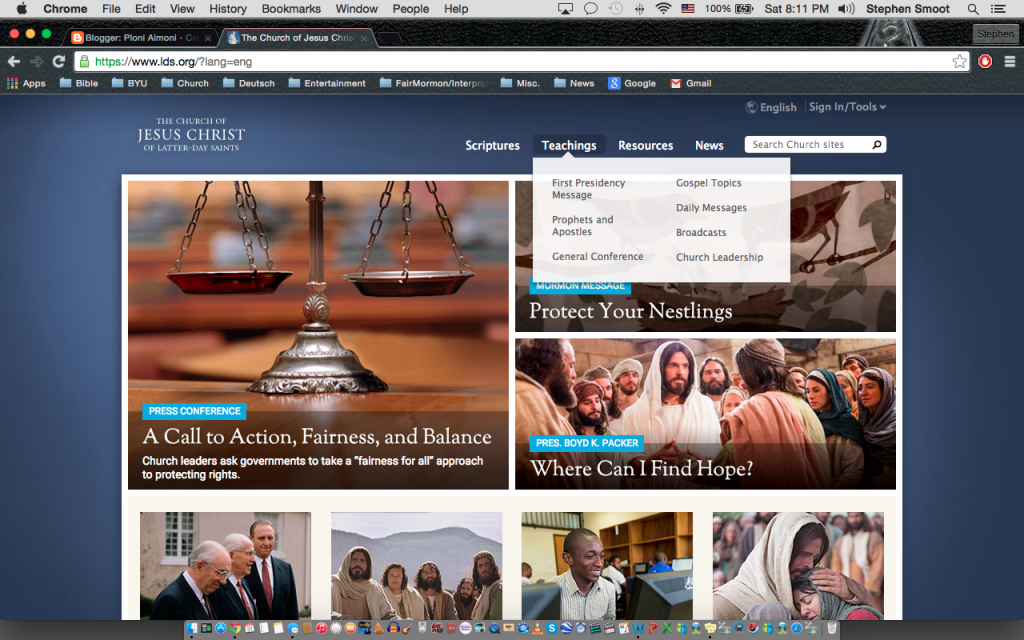 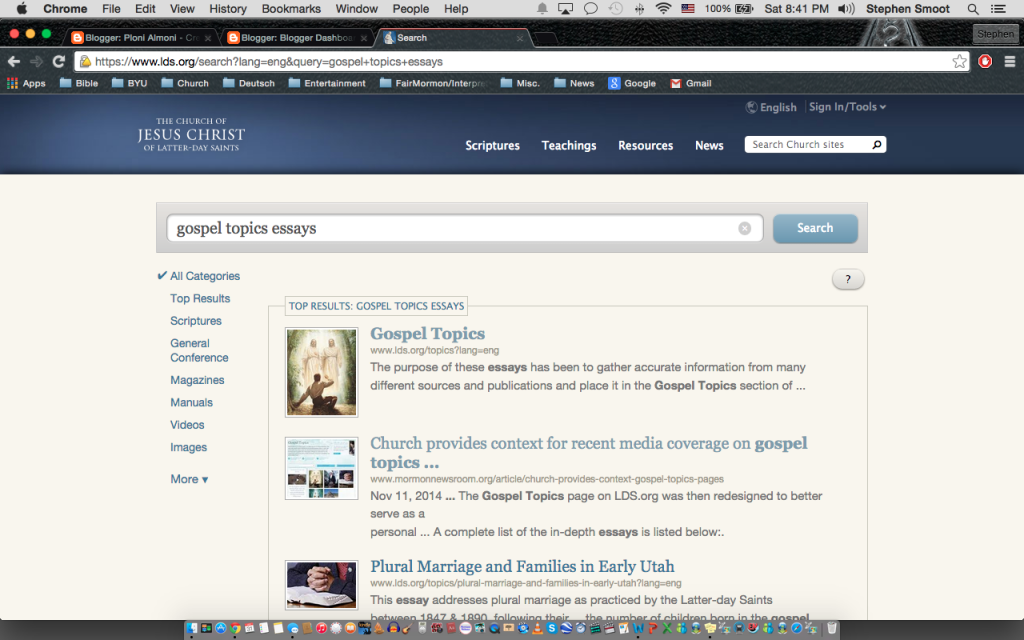 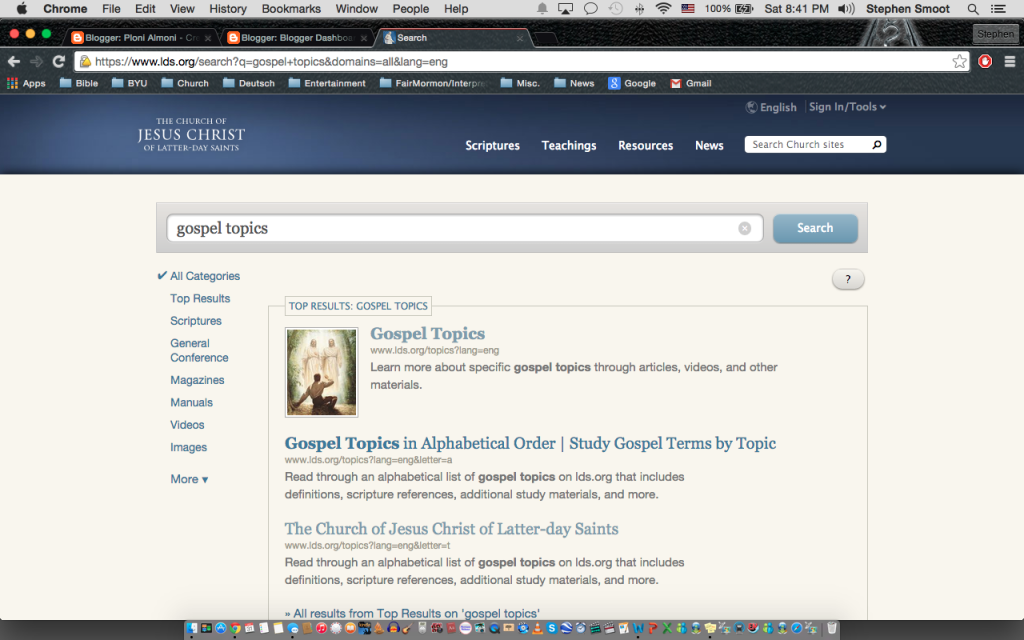 Last of all, as a nice dollop of whipped cream on the coco, is this article on the Church’s Newsroom page, which reports the names of the Gospel Topics essays and the date of their publication. 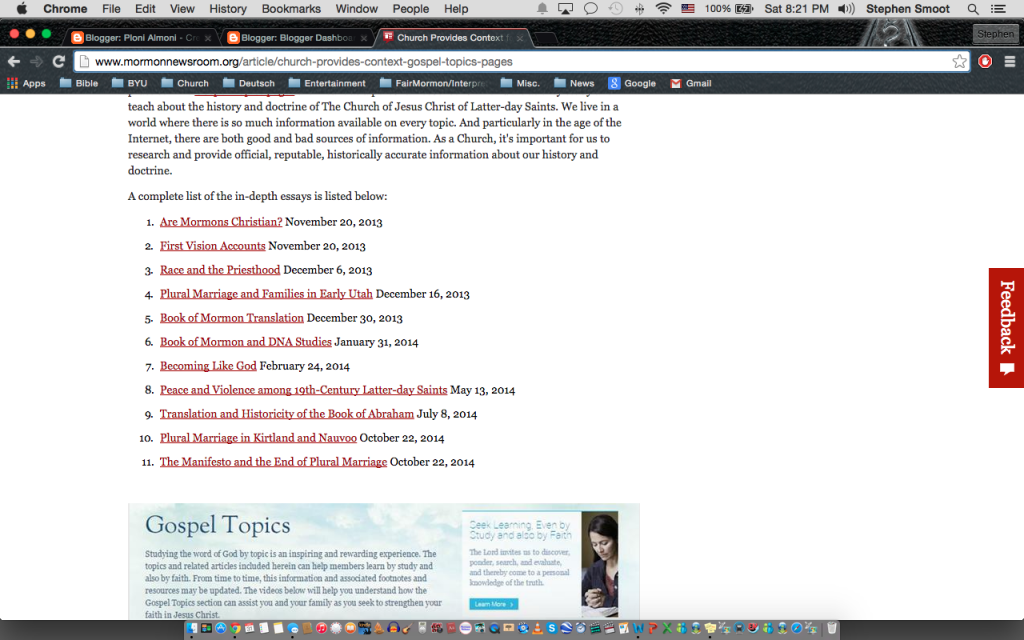 *A tangent to this point that I’ve encountered from some critics is to argue, “The Brethren don’t want to put their names on the essays because they’re cowards who (A) know the essays are bogus and/or (B) want plausible deniability when the real experts disprove all that apologetic nonsense.” Needless to say, both points are little more than mind-reading and question begging, and, lacking any evidence, can be dismissed out of hand.

2 thoughts on “Is the Church “Burying” the Gospel Topics Essays?”