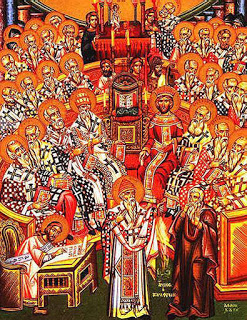 The legendary Geza Vermes (of blessed memory) has an amusing thought in his introduction to the 1992 volume Christianity and Rabbinic Judaism: A Parallel History of Their Origins and Early Development.

An anecdote recorded in the Babylonian Talmud (Menahot 29b) portrays Moses as seeking permission from God to attend in spirit a lecture given by Rabbi Akiva. He is allowed to slip into the classroom and sit inconspicuously in the back row. There he listens attentively to the exposition and the lively questions and answers, but Moses has absolutely no idea what the teachers and pupils are talking about until Akiva discloses that he is expounding a halakhah (legal teaching) brought down by Moses from Mr. Sinai.

One may well wonder whether Jesus of Nazareth would have been equally dumbfounded had he been given a similar chance to eavesdrop incognito on the sessions of the Council of Nicaea where his nature was the subject of much heated debate.

For what it’s worth, I have read more than one patristics scholar answer in the affirmative.