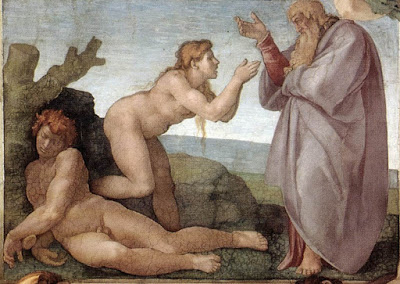 Concerning the creation of חוה (or, more properly, the אשׁה) from the צלע of אדם, Genesis 2:21 records:

וַיַּפֵּל֩ יְהוָ֨ה אֱלֹהִ֧ים׀ תַּרְדֵּמָ֛ה עַל־הָאָדָ֖ם וַיִּישָׁ֑ן וַיִּקַּ֗ח אַחַת֙ מִצַּלְעֹתָ֔יו וַיִּסְגֹּ֥ר בָּשָׂ֖ר תַּחְתֶּֽנָּה
Yahweh Elohim caused a deep slumber to fall upon the man, and he slept. Then he took one of his ribs and closed it up with flesh.
What’s interesting is the Septuagint’s rendering of the first half of this verse.
καὶ ἐπέβαλεν ὁ θεὸς ἔκστασιν ἐπὶ τὸν Αδαμ, καὶ ὕπνωσεν
And God threw a trance upon Adam, and he slept.
The Greek has God literally “striking” or “throwing” (epebalen) a trance upon Adam, making the action much more forceful than the Hebrew, which has a slumber “falling” (נפל) upon Adam. What’s more, the Greek renders the Hebrew tardēmâ as ekstasin (ekstasis), from where we get our English word “ecstasy.” Liddle and Scott helpfully define exstasis as “entrancement” or “astonishment,” and it is used in the Gospels (e.g. Mark 5:42; 16:8; Luke 5:26) to mean something like “amazement,” with the implication that something miraculous has just been witnessed. In Acts it is used to describe Peter’s “trance” or “vision” of the clean and unclean beasts (Acts 10:10; 11:5), as well as one of Paul’s visions of Jesus while he was praying in the Jerusalem temple (Acts 22:17).

In other words, according to the Septuagint, God did not really cause Adam to “fall asleep” when he created Eve from his “side.” Rather, he cast a vision or trance over him.

Commenting on this verse, the Evangelical scholar John Walton explains:

Michael Fox adds the insight that the word [tardēmâ] pertains to “untimely sleep or stupefaction, not to normal sleep at night.” . . . From these data it is easy to conclude that Adam’s sleep has prepared him for a visionary experience rather than for a surgical procedure. The description of himself being cut in half and the woman being built from the other half (Gen 2:21–22) would refer not to something he physically experienced but to something that he saw in a vision. It would therefore not describe a material event but would give him an understanding of an important reality, which he expresses eloquently in Genesis 2:23. Consequently, we would then be able to conclude that the text does not describe the material origin of Eve. The vision would concern her identity as ontologically related to the man. The text would therefore have no claim to make about the material origin of the woman.

Some interesting things to keep in mind the next time you read Genesis.

5 thoughts on “The Ecstatic Adam”