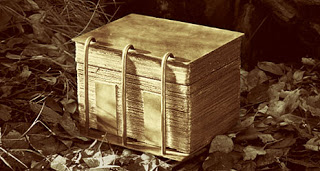 A question I’ve encountered from time to time is why, if Joseph Smith translated the Book of Mormon through revelatory means, were the golden plates necessary. Jeremy Runnells, for instance, wonders how this doesn’t make useless “the gold plates that ancient prophets went through all the time and effort of making, engraving, compiling, abridging, preserving, hiding, and transporting.” In his rambling bluster he demands to know why Moroni traversed a “5,000 mile journey lugging the gold plates from Mesoamerica (if you believe the unofficial apologists) all the way to New York to bury the plates, come back as a resurrected angel, and instruct Joseph for 4 years only for Joseph to translate instead using just a…rock in a hat?”

The misguided indignations of Jeremy Runnells notwithstanding, the answer is simple, really, as explained by Michael McKay and Gerrit Dirkmaat.

So, what was the purpose of having the plates if Joseph left them covered during the translation? Though Emma [and other witnesses] explained that Joseph did not use the plates, as a traditional translator would have, they were still deeply important to the translation. They represented where the words originated–––demonstrating their historicity, and forming a sense of reality about the individuals described in the Book of Mormon. The plates were in essence the body for the spiritual words that fell from Joseph Smith’s lips as he translated. They created confidence in the minds of Joseph and his family and friends. They offered believers something physical and tangible to understand how and where the text of the Book of Mormon originated.

They were also invaluable for demonstrating that Joseph Smith was a chosen seer. The relationship between the plates, Joseph, and God was indelible for communicating the nature and purpose of the Book of Mormon. Without the plates, the translation was empty, and without Joseph’s gift, it was not from God.

This isn’t anything new. Richard Bushman and Terryl Givens and others have made this same point a number of times. (Then again, staying current with historical scholarship isn’t really Jeremy’s strong suit, so I guess I can’t be too hard on him.)

So remind me again what the problem is, because I just don’t see one.

18 thoughts on “Why Were the Plates Necessary?”